And on the first anniversary of the Super Bowl parade, this is an idea we officially endorse. 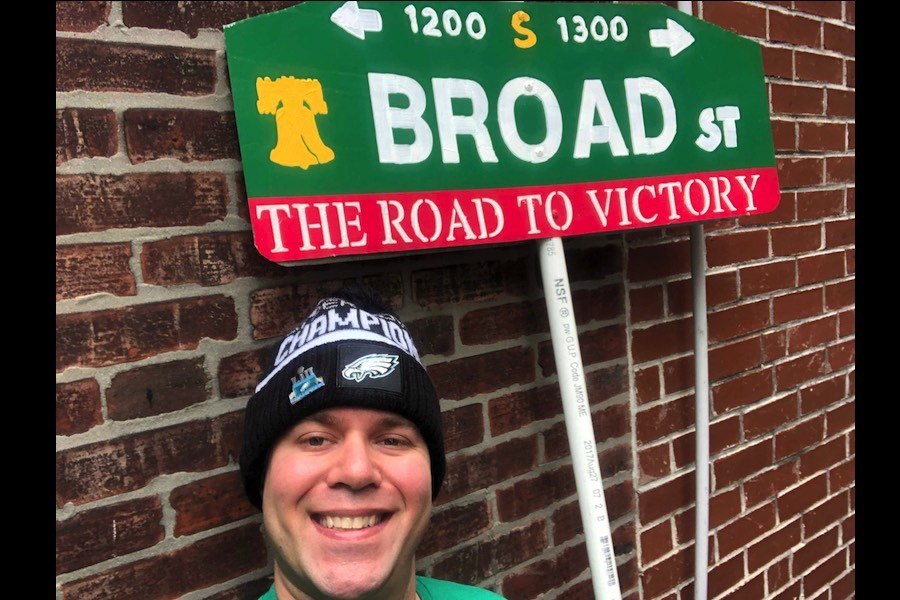 Philadelphia firefighter Christopher Bordoni and his Road to Victory sign.

It has been exactly a year since Eagles fans across the region converged on Broad Street and the Benjamin Franklin Parkway for a massive parade to celebrate the team’s Super Bowl win. And we here at Philly Mag think it’s high time that we honor the Eagles by renaming part of Broad Street with a nod to the team.

This is an idea first brought to life by 34-year-old South Philadelphia firefighter Christopher Bordoni on the day of the parade itself.

After the Eagles won the Super Bowl in February 2018, the Central grad knew he wanted to make something special for the Super Bowl parade. He had recently seen the honorary street sign for Boyz II Men in front of CAPA on Broad Street, and it gave him the idea to create his own using “The Road to Victory” as his slogan. 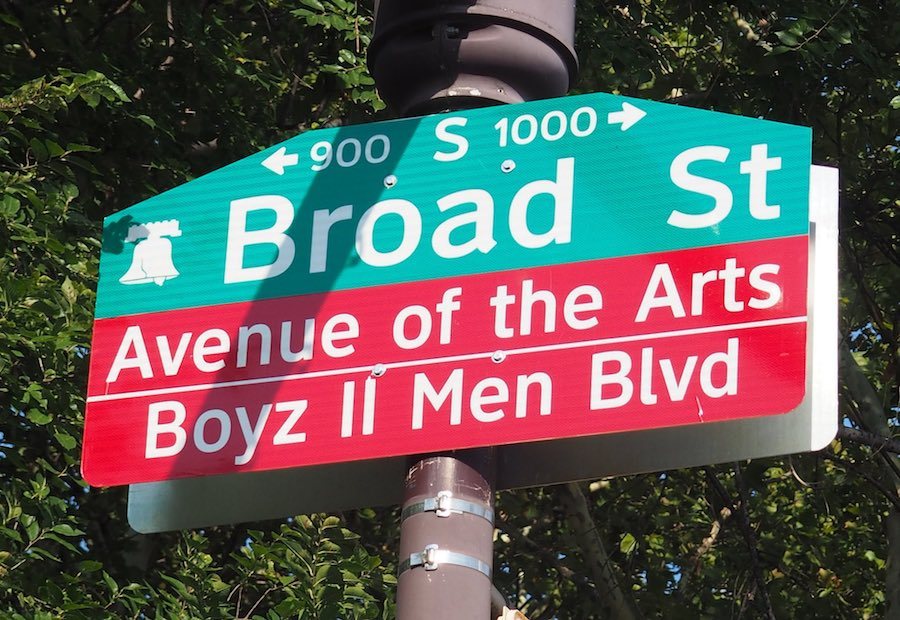 Originally, he was going to make a cardboard street sign, but then, smart guy that he is, he realized that a cardboard version might not hold up so well in the tumult of a big Eagles parade on Broad Street. So instead, he went to Lowe’s and bought some sheet metal and an eight-foot-long pipe.

“I wanted to be able to hoist it way higher than anybody in the crowd,” he says.

Then he went to A.C. Moore and grabbed stencils and paint.

Bordoni wanted his sign to look as real as possible, and it turns out that he had a real Philly street sign to use as an example.

Using his pilfered street sign for inspiration, as well as images he found online for honorary signs like the one for Boyz II Men, Bordoni got to work.

After three days of making sure everything was just right, Bordoni had his Road to Victory sign. 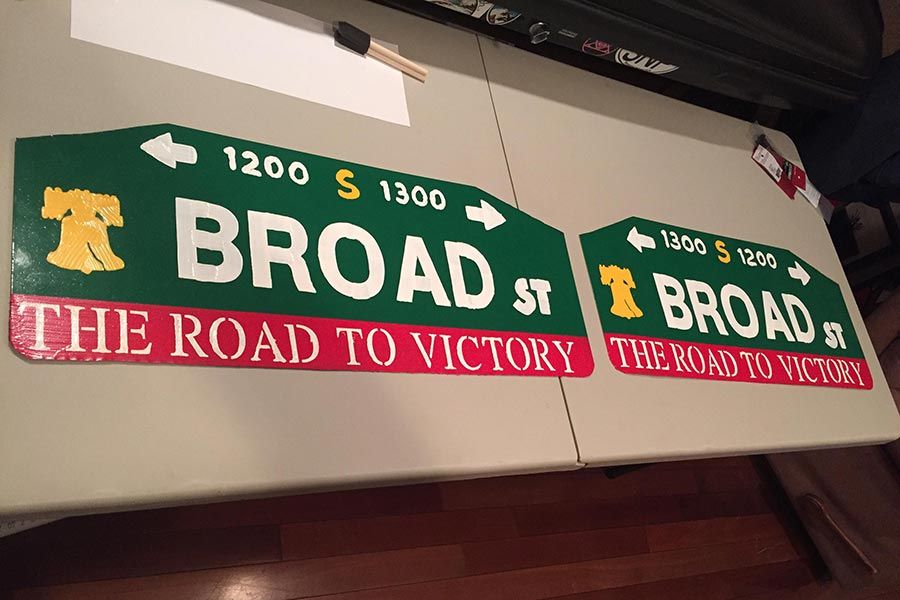 He spent the whole day out on the streets during the Eagles parade, and people couldn’t help but take pictures and post them on social media.

“I had friends I hadn’t talked to in years messaging me and saying, ‘Dude, you’re all over my Instagram,’” Bordoni remembers. 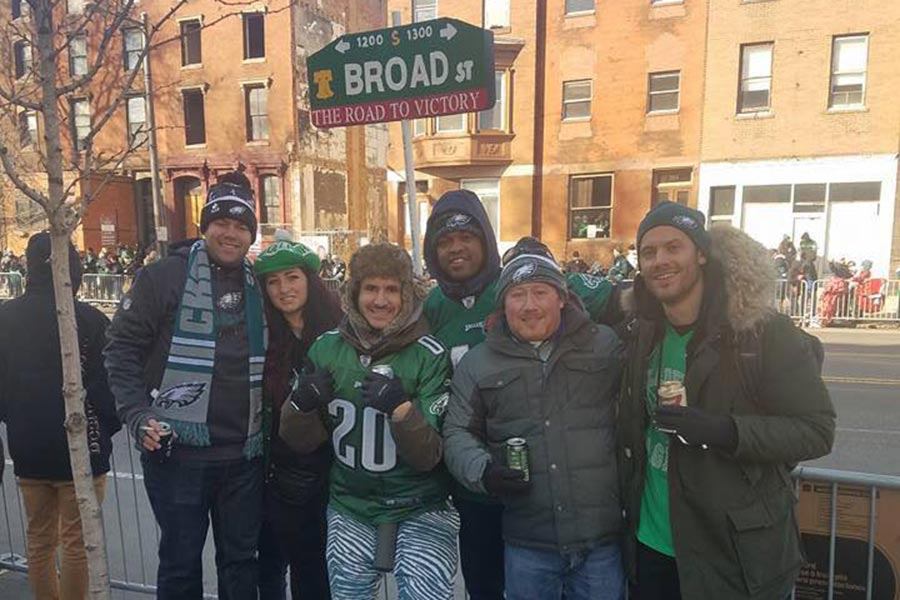 And then the parade was over.

Bordoni says the sign was originally just a cute idea — a stunt. But the idea of actually having the street renamed continued to percolate in his subconscious. Then two weeks ago, he decided it was time to make it happen.

He doesn’t want to make all of Broad Street the Road to Victory — just a block or two or three down by the stadium. And he believes that it’s still perfectly fitting even though we didn’t make it all the way through the playoffs this year.

“No one is ever gonna forget that day that we won the Super Bowl,” Bordoni observes. “Or when the Phillies won in 2008. I’m 34, and that was the first championship that I ever experienced first-hand, and now we have the Eagles. And I think that even though the ‘Road to Victory’ is taken from the Eagles fight song, it really applies to all of the sports teams down there. Whenever you head down Broad Street to see a game, whether it’s the Flyers, Sixers, Phillies or Eagles, you’ll be taking the Road to Victory.”

In 2018, City Council passed at least 17 resolutions for honorary street-naming, including the 2300 block of Ellsworth Street for WDAS-FM DJ Patty Jackson, part of Glenwood Avenue in Germantown for the late boxer Joe Frazier, and, controversially, a section of 59th Street for former mayor Wilson Goode.

Bordoni says he’s ready to start collecting signatures for a petition, working with Councilman Kenyatta Johnson, whose district the sign would be in, and doing whatever fundraising is required to turn this dream into a reality.

A spokesperson for Councilman Johnson says that the petitioner must explain to City Council the prospective honoree’s historical significance and contributions to the community and, well, we think the Eagles have that pretty much covered.

“I usually only honor people and I wouldn’t want to be responsible for the next Philadelphia curse,” says Johnson, who hadn’t heard of this proposal until we called his office today. “But if there’s support from the Stadium District, I’d look into it.”

“I just believe it’s time,” Bordoni tells Philly Mag. “The Eagles — and the city — deserve this.”