The Scottish actor hosted SNL last weekend and played an Eagles fan. Though we still prefer Tina Fey as our resident Iggles expert, thank you very much. 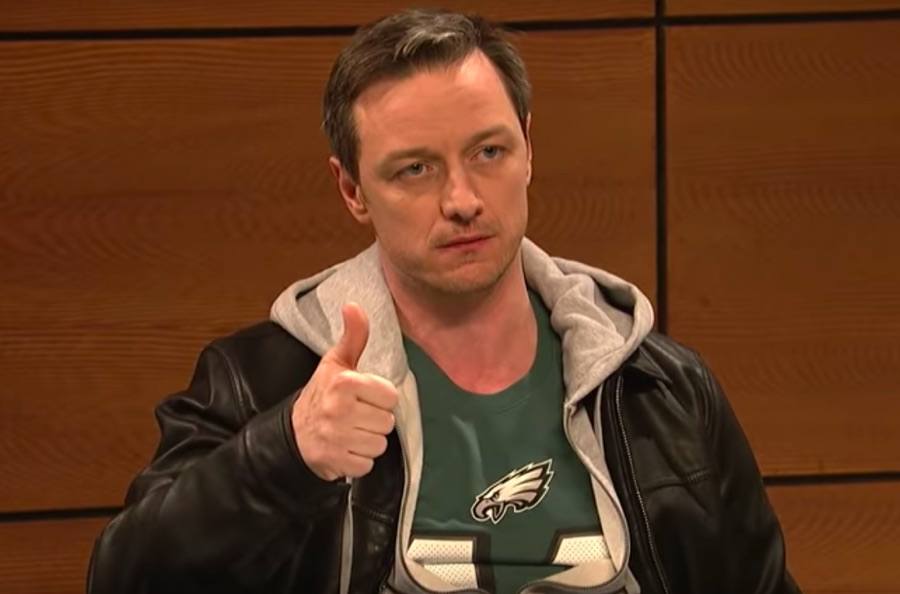 The James McAvoy Philly accent he premiered on SNL is actually…decent?

Philadelphia featured prominently in last weekend’s episode of Saturday Night Live: Meek Mill performed! James McAvoy, star of M. Night Shyamalan’s box-office-topping Glass hosted! And McAvoy got a chance to show off his Philly accent in a skit, alongside SNL heavyweights Kenan Thompson and Kate McKinnon, where he played an Eagles fan with an affinity for poop jokes. (A juvenile Eagles fan…points for creativity, SNL writers.)

The skit begins with a simple enough premise: A focus group is giving feedback on proposed Super Bowl commercial for the toilet paper company Charmin. Then, in typical SNL fashion, the scene takes a descent into the absurd, with McAvoy suggesting a series of less and less appropriate new commercials. I would outline them for you, but I don’t especially feel like writing about animated bears hooking up in a bathroom, which McAvoy offers up at one point.

Just see for yourself:

Now, it’s hard to trash McAvoy’s Philly accent — which linguists say is changing rapidly — too much. He was born in Glasgow, after all. And there are moments, like when he throws in a “youse guys,” around the 3:15 mark, where he’s almost believable. (Less convincing is the delivery of “bean burrito” at 2:10, which sounds more like a computer-generated AI slurring after a couple of beers.)

Needless to say, social media chimed in, with mixed reviews:

Wait, James McAvoy, is that a Philly accent? Or Chicago? I'm confused.
#SNL

I am here for James McAvoy doing a Philly accent.

Are we sure James McAvoy isn’t actually from Philly and is just faking his Scottish accent?

As for the final verdict, let’s put it in terms McAvoy’s character would understand: Not unlike the Eagles’ season this year, the performance was a solid effort, leaving a little something extra to be desired.

And a quick note to SNL: Next time you go the stereotypical Eagles fan route, might we make a suggestion? Bring back Tina Fey.