They’re part of the Center City District and Project HOME’s effort to end homelessness — and they’re your chance to help. 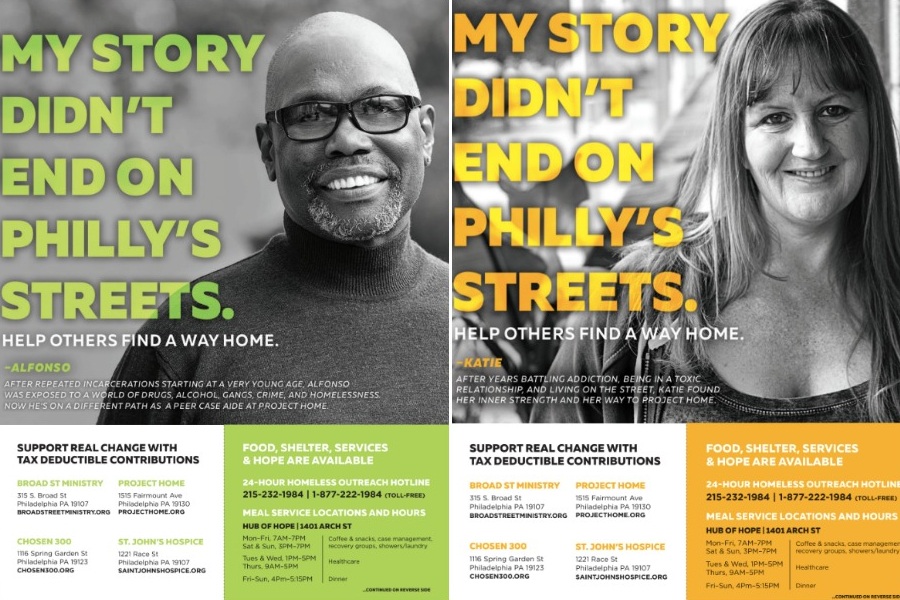 Postcards to be distributed by the Center City District and Project HOME as part of an effort to end homelessness in Philadelphia. | Images via the CCD

There’s a new campaign to end homelessness in Philly — and it encourages you to take a simple step to help.

The Center City District and Project HOME have partnered to create a new ad campaign aimed at people currently experiencing homelessness. The organizations announced on Tuesday that they’ll deploy electronic and paper poster ads on 70 transit shelters in Center City. Each of the ads will feature a photo and story of one of five formerly homeless Philadelphians – Alfonso, David, Katie, LaToya, and Nasir – who seek to inspire others to find a path out of homelessness. They ads will all have the same theme: “Your Story Doesn’t End Here. I Know Because Mine Didn’t.”

In addition, CCD and Project HOME will distribute postcards — which include information on where food, services and shelters can be found nearby — in Center City retailers, restaurants, hotels, residential buildings and offices. CCD and Project HOME encourage people to pocket the tearable postcards (which also include info on how to send donations to charities fighting to end homelessness) and hand them to someone they see living on the street. A rendering of a campaign ad. | Image via the CCD

The city’s Office of Homeless Services’ latest annual overnight count, conducted in January, showed that the total number of unsheltered individuals living in Philly increased from 930 to 1,020 between 2017 and 2018.

Officials say the increase is primarily a result of the opioid epidemic. The issue is especially prominent in Kensington, a hotbed for opioid abuse. As of September, Kensington’s homeless population had more than doubled over the last year, according to OHS, from 271 people to 703.

The Center City ad campaign is an extension of the six-month Combined Outreach Program that CCD launched in April. The program is a partnership with Project HOME, the Philadelphia Police Department and the city’s Department of Behavioral Health.

“Today more than ever we need to continue the fight to end and prevent street homelessness in Philadelphia,” Sister Mary Scullion, executive director of Project HOME, said in a statement. “Countless women and men have taken that first step that has led them home. We are redoubling our efforts to engage those who are living on the streets in Philly to end street homelessness.”

While the project’s six-month mark passed in mid-November (the CCD said collective efforts helped 134 individuals come off the street in that time), the organizations have extended the program to launch the ad campaign.

CCD president Paul R. Levy said the ads are “a new way to let people living on the streets know that help is available and recovery a reality.”

The front and back of small tear cards that will be distributed to Center City business. | Images via the CCD