“My platform and campaign will be bolder and more grassroots than my last campaign,” says the progressive who wants to be Philly’s first openly LGBTQ candidate elected to City Council. 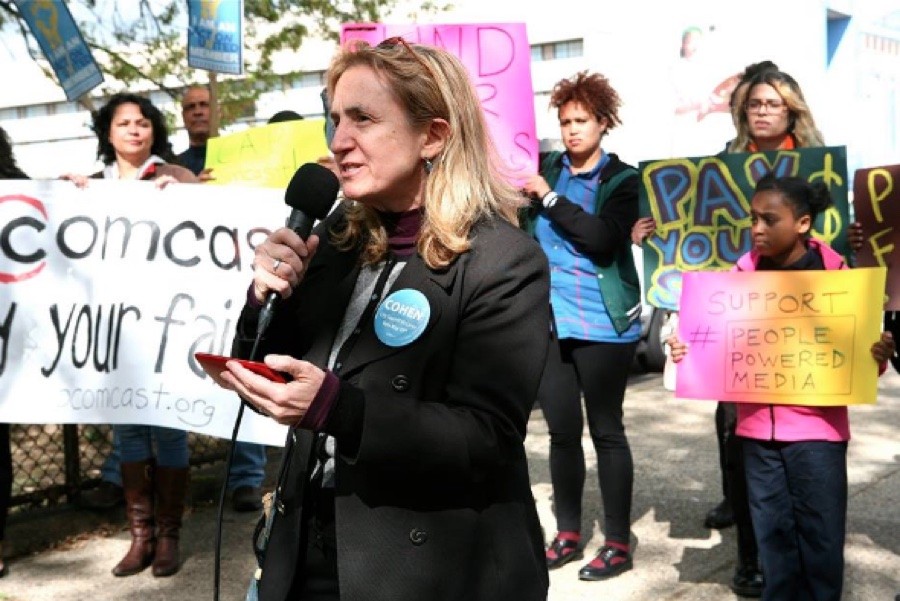 As candidates being to emerge for next spring’s Democratic primary for City Council, a familiar face is making a return. Social justice activist and political scion Sherrie Cohen is running for an at-large seat with a radical platform that she hopes will make her stand out in what is shaping up to be a crowded race. Speaking exclusively to Philadelphia magazine about her decision to run, Cohen wants voters to know her growth and plans to become Philly’s first openly LGBTQ candidate elected to city council.

What compelled you to run for office again?
The same issues that compelled me to run in the first place: my compassion for everyday Philadelphians who struggle with poverty wages, housing insecurity, educational inequity, anti-Blackness, the prison industrial complex, the threat of detention and deportation, gun violence, violence against women, violence against LGBTQ people, and the trauma that results from dealing with one or more of these crises. What compels me is my passion to change the systems that create these injustices – by participating in movements for racial, economic, educational, gender, LGBTQ and environmental justice and criminal justice reform; building bridges among communities so we can embrace the common ground we share; and electing movement candidates who are accountable to our most marginalized communities.

What makes your platform and campaign different from the previous run?
My platform and campaign will be bolder and more grassroots than my last campaign. My campaign manager is Abdul-Aliy Muhammad, co-founder of the Black and Brown Workers Cooperative, whose mission is to “actively challenge, resist and dismantle systems of oppression that adversely impact the Black and Brown worker.”

Together, we are working with other activists to create a transformational vision for collective liberation, a campaign platform that addresses the urgency and scale of the needs of our communities, and a grassroots participatory citywide campaign that will build the power of our movements for justice.

I would educate the public about our lives as I advocate for full equality, social justice and dignity for lesbian, gay, bisexual, transgender, non-binary and gender non-conforming people – for pro-LGBTQ legislation in our city, state and nation; for the need to secure the health, safety and housing for our youth who are at high risk of homelessness, suicide and substance abuse; for an end to bullying and harassment in our schools and violence and murder arising from transphobia and homophobia in our streets; for an end to the discrimination faced by transgender people in employment, health care and the media; for an end to HIV, which disproportionately impacts Black and Latinx communities; for an end to the health-care disparities we face.

What makes you stand out from other candidates in what is shaping up to be a crowded at large race?
I am a movement candidate. When Larry Krasner was sworn in as our district attorney, he said that the movement for criminal justice reform was sworn in. Like Mr. Krasner, when I get sworn in to office, the movements for racial, economic, educational and climate justice, for women’s and LGBTQ liberation, and for criminal justice reform will be sworn in too.

What also makes me stand out is that I believe in centering the lives of the most marginalized among us. I believe in centering Black women’s lives, Black queer lives and Black trans lives. As the Black lesbians and feminists in the Combahee River Collective stated, “[I]f black women were free, it would require the dismantling of so many systems of oppression that everybody else would be free, as a result.”

Finally, what makes me stand out is that I am a democratic socialist. I believe that both the economy and society should be run democratically – to meet human needs, not to make profits for a few. Our economy must work for everyone, not just the very wealthy. I agree with the words of Congresswoman Alexandria Ocasio-Cortez (D-NY), who said that democratic socialism means to her that “in a modern, moral and wealthy society, no person in American should be too poor to live.”

What is one solid message you want voters to know about you?
“Everybody’s got a right to live.” This is the title of a song that is sung at meetings today of the Poor People’s Campaign: A National Call for Moral Revival, and it had been sung also during the original 1968 Poor People’s Campaign. I believe the purpose of government is to help everyone live a decent life, with dignity, in safety, in their full humanity.

Everybody’s got a right to live. Everyone has the right to a quality education, a living wage, decent affordable and accessible housing, and health care; the right to walk down a street without getting racially profiled, sexually harassed, or shot. These are our human needs and our human rights. I am a fighter for human rights, for justice, for the healing of our communities, and for social and economic liberation.