Parks, parking lots, the opioid crisis: For this Councilwoman, it’s all in a morning’s work. 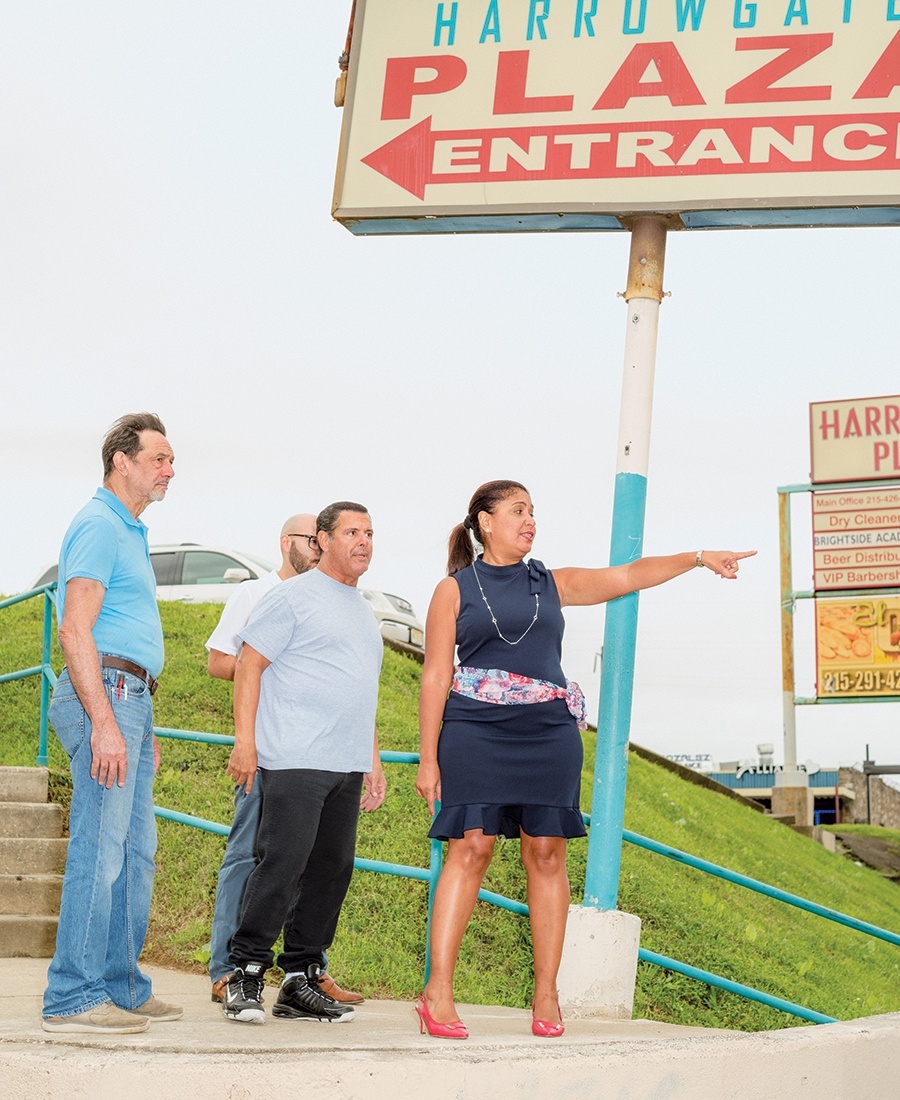 It’s hard to imagine there’s anyone in the City of Philadelphia who utters the phrase “opioid crisis” more often than Maria Quiñones-Sánchez. “I never thought when I got elected that the DEA and the police would be the people I would meet with most,” she says to me as we drive through North Philadelphia on this gray Friday morning. But seeing as she’s the Councilwoman for District Seven, a ragged swath of the city that includes Kensington — the neighborhood the New York Times recently dubbed “the Walmart of heroin” — the issue occupies a significant chunk of her headspace.

Of course, there are many things the 49-year-old must attend to in the course of a normal day — meetings with aspiring and established businesses, Council committee matters, park revitalization plans. But in the past few years, the drug-rattled encampments that have laid siege to her jurisdiction have loomed larger and larger. “It was a tsunami in the making,” she says.

And this — the tsunami — is how she officially starts today, at 8 a.m., wedged into a corner booth at Buzz Cafe, an orange-and-green-walled coffee shop on North Howard Street that looks more Central Perk than La Colombe. She’s here with Casey O’Donnell and Jose Benitez, the heads of two nonprofits that provide services to neighborhood people in need. They’re boots on the ground, and they have a lot to tell her about what they see, about what’s happening here. Their words are like waking up to a sucker punch.

To get technical, Quiñones-Sánchez’s day actually started at six, as it does every morning. That’s when she reads the paper. If something major has happened in her district overnight, a police captain will send her an email: “I appreciate that, right? Because they know that I want to know that kind of stuff. But that in the morning is sometimes really draining, because before I’ve had my first cup of coffee, I already know where my fires are.”

At the coffee shop, O’Donnell and Benitez are incensed about a recent Inquirer article that said the city’s homeless population was migrating to their neighborhood. There is so much suffering, they say — not just by the homeless and those addicted to drugs, but by the people who live here, the children on their way to school who pass addicts shooting up. They rage over City Council’s slow response. “The fact that other politicians believe that this is your problem, instead of a Philadelphia problem or a national problem … it’s a structural flaw in their thinking,” says O’Donnell, getting louder. “I would call them out. Where is City Council on problem-solving with you?”

Quiñones-Sánchez sits with a straight back. She’s in a navy knee-length dress with a ruffled hem and red heels. Her notebook is open; her phone is down. She listens; she nods. When she responds, she talks with her hands. People approach her all morning, and she gives them her undivided attention. “One of the best things is that people feel like they can come to me,” she says. “Even when we can’t give them the answer they want, they need to feel like they were heard.”

The meeting ends, but she sticks around for a few minutes to chat with some of the people who have filled up the coffee shop in the past hour. She eventually grabs a cup of coffee to-go and steps out to the street. Buzz Cafe is seven years old, one of the first “New Philly” shops to move into the neighborhood. Now there’s a craft distillery and a CrossFit gym a few blocks away — businesses that are trying to look at home in what Quiñones-Sánchez calls “one of the most resource-intense neighborhoods in the city.”

She crosses the street, throws her bag in her black SUV, and climbs into the driver’s seat. President Obama is in town today for a rally, but she’s headed to Lancaster soon. The Pennsylvania Statewide Latino Convention is having an event, and she’s going, to show solidarity. But first, she’s got a few stops to make.

We head north on Howard Street toward Norris Square. This is, indisputably, her neighborhood. Quiñones-Sánchez grew up in Hunting Park, about three miles from here, and she’s lived with her husband in Norris Square for the past 21 years; it’s where she raised her two sons. She points out her modest brick house as we pass it. Since she was elected, her bond with these blocks has gotten even deeper. She has represented the area for 11 years now and is currently serving out her third term, though she hints it might be her last. This is the longest she’s ever held one job.

As we drive, she points out parks and playgrounds that have been restored under her tenure and tells me she was able to secure money from ex-Eagle Connor Barwin and the late Ed Snider to get the work done. “I wrongly fixed everyone’s park before mine,” she says. “I didn’t want people to say I was just doing it because it was my park.” But now that “her” park is finally getting its overdue face-lift, people are saying that she’s only doing it for all the new people in the neighborhood. She shrugs.

Quiñones-Sánchez organizes her days by theme: catch-up days, Council days, meetings downtown. She spends Fridays in her district, meeting with business owners, checking in on projects, and hosting “Coffee With the Councilwoman.” (“People will come thinking we are going to talk at them, and I’m like, ‘No, I’m here to listen.’ It freaks them out,” she says with a laugh.)

We pull into the vast parking lot of Harrowgate Plaza to meet with Rey Pastrana, the shopping center’s owner. The strip mall sits up high, like an urban citadel, with an elevated view of the neighborhood around it. Pastrana comes bounding over to the Councilwoman, arms open wide. The two have known each other for a long time. Pastrana notices that she’s all dressed up — on Fridays, she’s usually Maria from the block, not Maria from City Hall. He’s in head-to-toe sweats, he says, because he’s been going back to the gym. “Because maybe then you’ll take me to Puerto Rico with you!” he jokes. Quiñones-Sánchez and her husband — an attorney and a director at Temple University — own a place there; they go in the summer and for Christmas. She tells me it’s the only place she can truly disconnect.

The group that meets us, which includes Rafael Alvarez Febo, a Council staffer who works with small-business owners, has convened to talk traffic. Pastrana has finally secured a new anchor tenant, a grocery store, which will bring more cars and people. One of the challenges of this neighborhood, the Councilwoman explains to me, is that it’s both industrial and residential — meaning big trucks regularly come through an area where kids and families live. A grocery store is only going to amplify that.

Together, she and Pastrana walk down a set of steps to an intersection below and discuss, in a mash-up of Spanish and English, if a traffic light would help, or maybe a yield sign. For Quiñones-Sánchez, this is personal. Twenty years ago, her brother died in a traffic accident at 2nd Street and Erie Avenue, less than two miles from here. So she’s taking the initiative to make a recommendation to the Streets Department rather than waiting to see what they come up with.

An elderly man with a fantastic mustache lingers nearby. She calls him over to talk. They speak quietly in Spanish. There have been problems with illegal body shops; people come into abandoned buildings and fix cars, and it’s a mess. This gentleman complained about one next door to him, she explains to me later: “He says an inspector did come out but didn’t do anything to the guy.” He asked her if the inspector was paid off. She listens; she tells him to be patient. He meanders away.

The group heads back to their cars. Quiñones-Sánchez points out a Police Athletic League rec center on one side of the plaza — a guy she went to high school with operates it, running programs for kids. On the other side, near the intersection in question, is MaKen Studios, a former industrial building that now houses the commissaries for Little Baby’s Ice Cream and Snap Kitchen, plus artists, a recording studio and more. Parts of her district are among the most rapidly gentrifying in the city.

Quiñones-Sánchez is swinging by her field office before she heads to Lancaster. We cruise past another park that was recently redone. She tells me it’s a mix of “active and passive” space so that seniors can enjoy it as much as toddlers. Her cousin lives across the street and reports back: It’s packed on weekends.

But, she says, there’s a problem. The homeless people come in and defecate everywhere. She had to get the cops to lock this park up at night and unlock it in the mornings.

And here we are, only 45 minutes later, with the opioid crisis back in view. We decide to head for crisis central.

After a few turns, we arrive at Emerald Street, which is dark from the train tracks that run above it and harrowing from the tents of addicts that line both sides. “It’s our most dangerous one,” she says, referring to the area’s encampments. “There’s prostitution. Someone got killed here. Ambulances are here three, four times a day.” The street is wet, freshly scrubbed. “The city comes in, they move their stuff, and we clean it for them. We literally clean their shit.” We pass an outreach team handing out goods from the back of a car.

Quiñones-Sánchez points to a stone house across the street from the encampments. Another cousin lives there and now has to beat people off her front steps: “There is not a grill, chair or flowerpot that is not stolen. No one keeps anything outside anymore.”

We drive a few blocks to an El station, and I get out of the car. Quiñones-Sánchez is headed back to her office to find someone to drive her to Lancaster, so she can make calls during the trip. When she gets back, probably around 10 p.m., she’ll call her 72-year-old mom, who lives in nearby Juniata, so she can meet up with her. They play dominoes with a group of family and friends on Friday nights. “I have to host once a month,” the Councilwoman says. “It doesn’t matter how important I think I am.”

Published as “Dropping In: Queen of the North” in the December 2018 issue of Philadelphia magazine.