One Day in the Life of Philly: This Is Us

What makes a city a city? The people who live their lives in and around it. 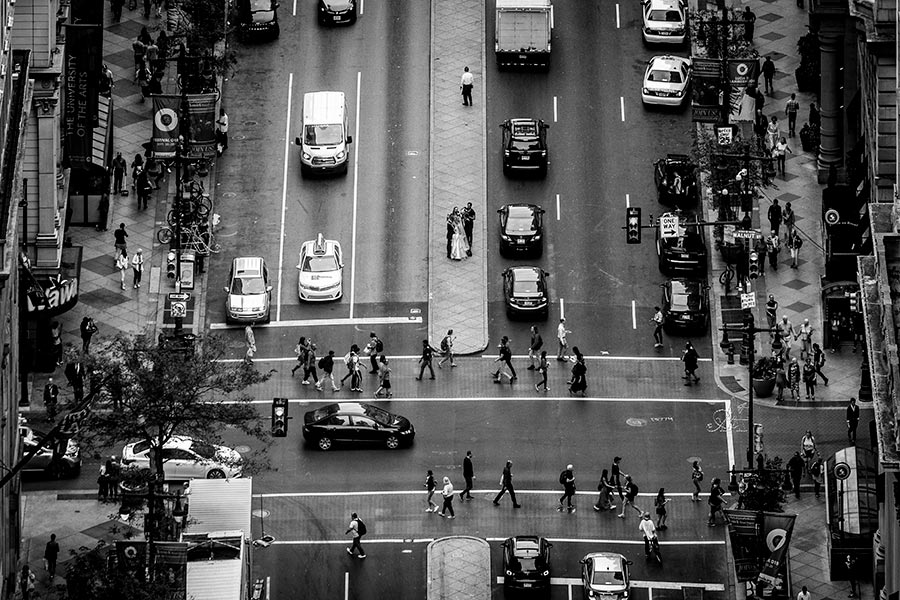 This city — any city — is an accident of geography. At some point, someone stood here, looked around, took in the conjoining rivers and distant hills and tall trees and rich earth and green vines, and said, “You know what? Here. This is where we’ll stay.”

Native Americans said this, and then Dutch settlers, then the Swedes, then Quakers. And then, in long and short bursts, Scottish and Irish and Italian and Jamaican and French and Nigerian and Vietnamese and Venezuelan, all with their own reasons, a million reasons, big and small. The Lenape name for what’s now Fairmount Park was Nitapèkunk, or “Place that is easy to get to.” Access is destiny. We rode in on those rolling rivers until there were so many of us that we built new rivers, wide and gray-black and curving, and called them the Expressway and I-95.

We washed up here from war-torn nations, drought-stricken deserts, overcrowded shtetls, famine- ravaged hovels. We came with nothing, or with silver in our pockets, or the knowledge of how to herd sheep. Some of us came in chains. We spoke a hundred different languages; we learned to make ourselves understood. We sang in all our voices, danced in our only shoes. We brought our gods along.

We’re still washing in today, from all directions. Just sit any morning on that jammed Expressway, waiting in endless lines of commuters streaming into the city. Walk the bowels of Suburban Station as more of us pour out onto the streets. Search the skies for big silver birds ready to touch down in the swamps of Tinicum, where the lazaretto in which immigrant newcomers were once quarantined — the nation’s oldest — still stands.

We defined ourselves at first by what we were not: not from around here, not the same color or religion. We lived in enclaves, ghettoizing ourselves so that at least the bread and beer and supper smells would be comforting: Italians in South Philly, Jews along South Street, Africans in Spruce Hill, Latinos in Kensington, Germans in Germantown. Over time, the edges bled into each other, our cultural detritus layering like strata in a privy: You want a Polish sausage sandwich? You want it with Thai hot sauce? On an Italian roll? The kids all spoke English. Neighborhoods turned like the tides, in waves.

And somehow, out of all the randomness, the hardship and serendipity, we coalesced, coagulated, congealed into a sort of American pudding (kugel/flan/muhallebi/guo/crème brûlée … ). We were lumpy and uneven at first, but history kept stirring — a revolution, a yellow fever epidemic, civil war, world wars, race riots — and the lumps smoothed out. We started to turn into us, not them. We invented modern democracy, and a sandwich, and soda pop and ENIAC. We threw spectacular parties — for the Centennial, for the New Year, for the NFL draft. We gave birth to a princess. We sprouted universities. Our restaurants blossomed. We won a World Series. We won a freaking Super Bowl. We are a city breathtaking in its diversity, bound together now as much by what we’ve endured and celebrated and fought for as by geography.

There are so many ways to look at this city — at any city. You can view it through a historical lens, tracing the battles between white men and Indians, slave owners and abolitionists, suffragettes and chauvinists, drinkers and temperance marchers. You can use a political filter and try to figure out how Philly evolved in terms of labor and management, Progressives and Know-Nothings, Abscam and gun control and the City Charter. You can talk about our architecture, or art, or music, or eats. You can reach conclusions based on that filter: that we’re stagnating, that we’re on the cusp of revival, that we’re regressing, that we’re the be-all, end-all. You’ll see something different depending on what you’re looking for.

And on who’s doing the looking. For longtime Philadelphians, the city’s current rep is a bit unsettling. To be lauded by the New York Times and Food & Wine and Forbes and Sports Illustrated and Travel + Leisure makes us feel like toddlers wearing Mom’s high heels: Don’t they know us? Can’t they see who we are? Our chief accessory has always been a shoulder chip: not New York, not Washington, not Silicon Valley, not the capital of politics or finance or fashion or anything, really, anymore, forever looking backward with a longing eye.

But still, those rivers keep running.

And our new, adoptive children don’t share our imposter syndrome. They haven’t been here long enough; anyhow, they’re not inclined that way. They’re all face-forward, charging into the future, ready to bust right through our municipal malaise and run for committeeperson, open a cat cafe, organize a protest, remake the schools into nourishing cocoons. Who are we to naysay them, to poke fun at their awesome, wholesome energy? To them, the city is a playground whose monkey bars are just a tad grimy. Some elbow grease, a little steel wool, and it’ll shine like new.

But it’s not just superficial, that shine. We’re still fomenting revolution. We’re a proud sanctuary city. We’ve been marching for gay rights since before Stonewall. We’re working on the nation’s first safe injection site. Hometown kid Comcast just gobbled up Sky, with its 23 million customers in seven countries. Meek Mill is out of jail, and Ryan Pownall may wind up there. Our riverfronts are reaching new heights in entertainment. Even the endless construction we bemoan as we pick our way around gaudy traffic barricades is a sign of progress: Going up!

And that’s where we are. Where we stand — in the now, smack-dab between history and whatever comes next. We have dinosaurs and drones, statues of Catto and Rizzo, Betsy Ross and her scissors and Penn’s gene splicers. An Italian Market that’s more like Mexican, a Chinatown that’s really Greater Asiaville, the steppes of the Northeast, the mysteries of Chester County. Taco trucks on so many corners! We are large, as our Camden neighbor Walt Whitman put it. We contain multitudes.

It’s hard to shake the sense that this city and the suburbs that have grown up around it are at a juncture, halfway through the first term of President Donald J. Trump, just past midterm elections that were alternately predicted to be blue waves or red waves but turned out (surprise) to be a muddy purple instead. Where are we going? Which way are we turning? Are our best days still ahead of us or far behind?

Sometimes, to get a sense of where you’re going, it helps to look really hard at where you are.

So just for one day, we stopped the rivers. We spread a magic cloak over the region and froze it in our lenses, like the glistening icicles that hang every winter from the cliffs along the Expressway, that we’ve marveled at since we were babies bundled into the station wagon (look, Ma, no seat belts!) to head to Poppy’s on Two Street for the Mummers Parade. This is Philadelphia right now, this day, from Harrowgate to Chestnut Hill, Brewerytown to Bridesburg, Strawberry Mansion to Girard Estates. Like a river, its silt holds siftings of every day that’s gone before it. Like a river, it won’t be the same tomorrow — and yet it will. The water moves on, but somehow it remains.

Water brought us here, an accident of geography, and then it made us. It spun our mill wheels, cooled our beer kegs, buoyed our skiffs and sculls, sprayed us from neighborhood hydrants in the shimmering heat. It reflects our sunsets and headlights and Roman candles. It washes our wounds and stoops and tears. It flows around us and through us, uniting us, connecting us to one another as well as to our past. It has weathered us, polished us, honed us, and now this is us. Philadelphia, the Gritty City. The place that’s easy to get to but surprisingly hard to leave.