For this 13-going-on-14-year-old, Friday night is all about hanging with her friends IRL. 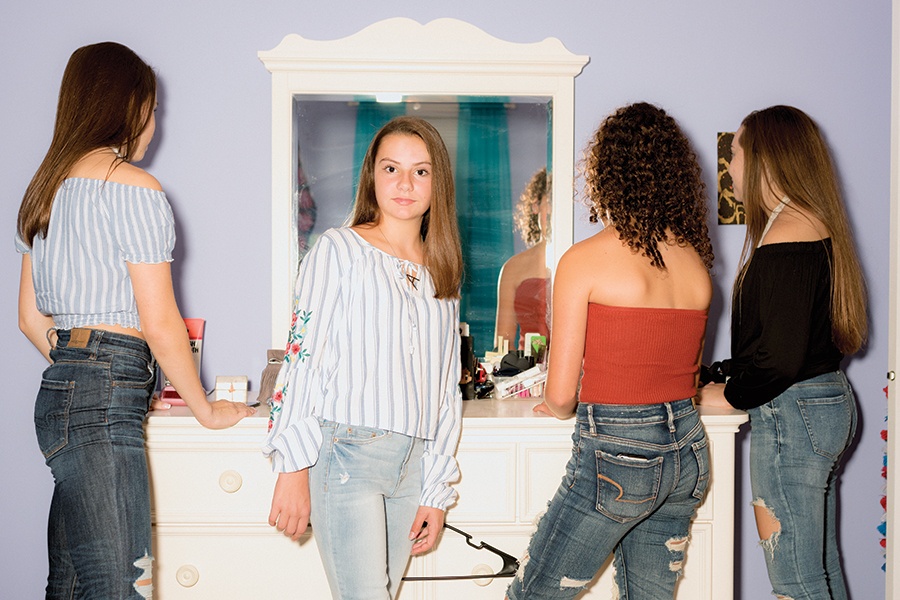 If you’ve felt pummeled by this world lately, your belief in innocence and joy and a life-affirming future wounded by everything that is 2018, perhaps you should spend a Friday night with 13-year-old Amanda Green and her friends Sarah, Maria, Jenna and Julia. This crew has been best buddies since they were kindergartners; today, they’re eighth-graders at a sprawling middle school in Bucks County. For them, a free night might mean a trip to Great Adventure, where they all have year-long passes, or sometimes a sleepover, depending on who has what sports practice in the morning. Other times, like tonight, it’s a simple outing to a favorite pizza place in idyllic downtown Newtown.

Technically speaking, though, this night really begins right after school, in the parking lot. It’s a normal Friday evening except for one thing: Amanda, who has spent the past several afternoons trying out for the field hockey team, is finding out if she’s made the cut. She’s been feeling fairly confident about her chances because she played last year, but then again, she sat out most of the season with two broken wrists, so it’s not a lock. But here she comes, walking toward her mom’s waiting SUV, long brown hair swept back from her face in a headband and a high ponytail, knee socks and shin guards in place, legs still browned from summer. She gives her mom a small, shy smile, momentarily flashing braces — the old-fashioned metal kind, not that Invisalign stuff — and a little nod: She’s in. She made varsity. This means that in addition to her thrice-weekly soccer practices and weekend games, church on Sunday, the normal eighth-grade course load (she had three tests just today), and occasional study sessions with friends at Dunkin’, she’ll throw field hockey practices and games into the mix. There’s also basketball in the winter, and she’s been known to dabble in chorus.

Amanda, who makes mostly A’s in school, seems undaunted by this schedule: “I feel like I have it down now,” she says, “because I did it last year, too.” Last year was the hard year — and that was mostly because she was adjusting to the middle school, trying to fit in, meeting new kids. This year, she’s feeling good — the benefit of experience. Although, she admits, there are occasionally days like yesterday, days that are a lot to manage: school, then field hockey, then home for dinner and a quick study session for today’s tests, then soccer at 7:30, then home for a shower and more studying, then, finally, bed just before 11 p.m. She thinks she did well on all her tests — one of which was in math, her favorite subject. In fact, she envisions herself studying something math-y in college, maybe engineering. (Her t-shirt is emblazoned with the Penn State logo, but that’s just because her dad went there; she doesn’t know where she wants to go yet.)

After tryouts, we head to Amanda’s house, a comfortable two-story with a big backyard. She’s lived here all her life. As I arrive, her brother, who’s 17, is grabbing his gear for a quick evening fishing trip; Amanda, meantime, goes upstairs to change and get ready for a night with her friends, who arrive in pairs, dropped off by their parents. For the first of many times this evening, I’m stirred by a warm, enveloping familiarity: the grassy smell of suburbia; the loving, good-natured parents downstairs; a purple bedroom with photos (friends’ bat mitzvahs, mostly) tacked to the wall; the shin guards tossed on the floor; the girlfriends piled onto the bed, talking about Spanish class; that glorious feeling of freedom on a fresh Friday night.

Bring on the pizza.

Amanda has had a phone since she was 12. (“Everyone does,” her mom says with a little sigh, adding that some teachers even let kids use them in class as learning tools.) So much of the evening is a flurry of Snapchat messages to friends from school and to one another, pictures taken with filters and stickers and a catalog of editing tools I can’t begin to tell you about, though I can tell you that at one point, one of the girls took a photo of her face, duplicated it, and shrank it down to be little face-earrings decorating her original face, to everyone’s delight (including mine). There are, many mornings, Snapchat convos over what to wear to school; tonight, Snapchats are flying with a new boy at school who only sends slivers of his image (mysterious!) but who I hear has very nice eyes, when you see them. (People rarely show their whole faces in Snapchats, I’m told.)

Amanda, who hasn’t met this boy but has Snapchatted with him, says, “Social media is good for that kind of stuff but can get annoying at other times. Everyone only shows their best moments.”

Speaking of best moments: These young women will almost definitely not regret their outfits 20 years from now. They look pretty, natural, with no big statement hair or makeup. They also look cool — by my standards, by their standards, by anyone’s standards — in their uniform of high-waisted jeans with tears in the legs, Pura Vida woven bracelets, Vans sneakers, and cute, loose-fitting tops (four out of five off-the-shoulder). When they all move together — as they do to pile into Amanda’s mom’s car to go for pizza — it’s a tornado of long, swinging hair, denim, and glowing phone screens.

They’re allowed to dine alone while Amanda’s parents have dinner down the street; everyone has two slices and talks about grades and classes and their days (those seventh-graders who think they’re entitled to sit in the back of the bus are so wrong) and the Netflix movie To All the Boys I’ve Loved Before (they really like it) and braces (one is about to get them on; another is about to get them off). As a group, they agree that the boys at school who make fun of the kids with disabilities are terrible. They generally believe school dress codes involving bra straps and headbands and short shorts to be sexist; they do not swear; they all like Ariana Grande and Shawn Mendes; they all intend to go to college; they don’t have much to say about the news or politics (“I’d rather have Trump than Hillary,” offers one), though all agree that it would be nice to have a female president, because “girls have a different take on things than guys.” Prompted by me, they discuss the more serious things they stress about, namely tests and homework and, Amanda adds, “people who are mean, or who try to make you feel bad about yourself.” The conversation takes a bit of a darker turn when one girl notes that her biggest worry is a parent dying, which gets a chorus of agreement. “My mom is my best friend,” one girl says. “I don’t know what I’d do without my mom.”

When pressed, they seem to agree that the future in general, and the mysteries it holds, can sometimes be a point of concern. Not the future on a global scale, but for their young lives. One girl sighs that she fears she’ll never figure out what she wants to do as her career; another is afraid she’ll never get married. (One friend’s loving response to the latter: “Oh my God, I can totally see you as an old cat lady. Hahahaha.”) Amanda’s concerns are more general: “Sometimes I worry, ‘What if something goes wrong?’” After all, she broke both her wrists last year; she knows sometimes things just happen. “It’s like if this one thing goes wrong, it could change the rest of my life.”

The next time I read one of the stories out there that tell us teens today don’t know how to form real relationships because they’re too busy being phone zombies, I’ll think of this night, at this table at this pizza place. I’ll think about Amanda and her friends, who alternately show each other the genuine love and loyalty that come with a lifetime of attachment (one said to a boy who asked her to a dance, “I’m sorry, I’d just really rather go with my friends”) and give each other the sort of good-natured hell that only real friends can.

After everyone has finished her pizza, it’s nearly time to walk the block or so to meet back up with Amanda’s parents. But first, the group wants a picture. As they smooth their hair and figure out the best backdrop, I’m wrapped up again in that lovely sense of time-warp nostalgia. You know: to be 13-almost-14 on a Friday night with all your best girlfriends, facing a weekend without too much homework. It was, and apparently is, an excellent thing to be — at least, it can be — and I think about saying this to the girls, like the ancient, wistful outsider I am. But instead I just take all their phones, as requested, and snap a series of pictures of Amanda Green and her friends smiling together, capturing this fleeting, normal Friday night for posterity.

Published as “Dropping In: Teenage Dreams” in the December 2018 issue of Philadelphia magazine.