And it includes a champagne toast, because sea monsters obviously love champagne. 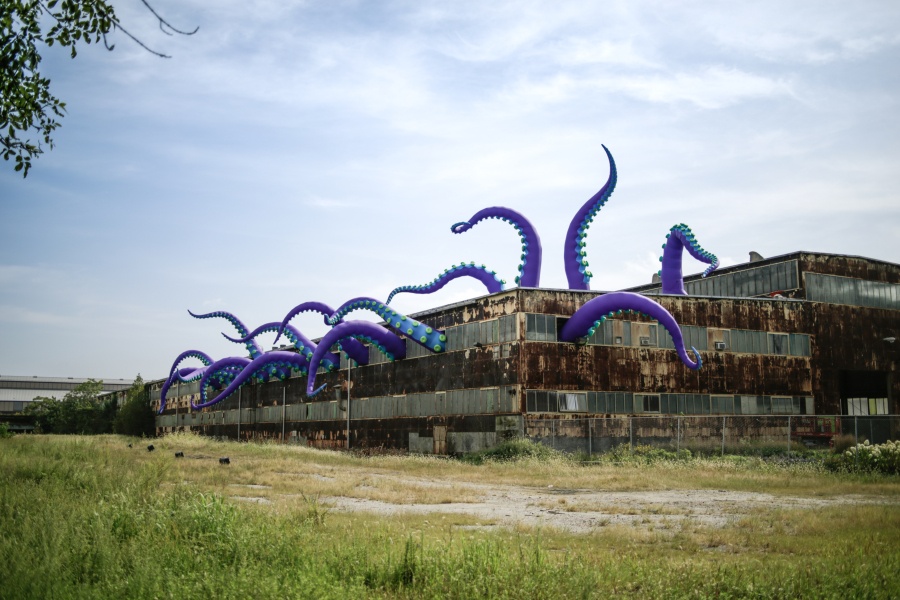 If you haven’t taken yourself down to the Navy Yard to see Sea Monsters HERE, what are you waiting for?

You have until Friday to visit the one-of-a-kind installation — after that, it’ll be gone. In its place will be the memory one of the most beloved art projects ever to grace Philadelphia.

For those of you who absolutely adore the exhibit (which should be everyone), we have some good news: You can see the sprawling sea monster in all its glory one last time during a goodbye party on Friday evening. The shindig will even include a champagne toast, because sea monsters absolutely love champagne, of course.

The goodbye party, which is free and open to the public, will run from 5 to 8 p.m. on Friday. The sea monster’s maker, Filthy Luker, will come to Philly from the U.K. to attend the farewell event.

4 DAYS: How time flies… the #NavyYardSeaMonster, the first collaborative partnership between us and @navyyardphila, is leaving Philadelphia, but we’re sending her off in style… Join us with sea monster artist @filthyluker for a special farewell party this Friday, November 16 from 5-8pm… And yes, you read that right – Filthy Luker is coming from the UK to Philly to send her off! Click the link in our bio now to read more, and stop by Building 611 (13th street and Flagship avenue) at the Navy Yard on Friday for this final farewell!

Some super-quick background: Sea Monsters HERE was installed in October, and it consists of 40-foot long blue, purple and green tentacles creeping out of a rusting industrial building. It’s the result of a collaboration between the Navy Yard and Filthy Luker (whose real name is Luke Egan) and fellow artist Pedro Estrellas, as well as the anonymous Philly-based artist and curator coalition Group X. And it’s really freaking cool.

Egan and Estrellas have been creating tentacles projects all over the world for a decade — but in a phone interview, Egan said the project was the duo’s largest ever and that it’s led to “unprecedented press.” He said he’s even received calls from people in New Zealand about it.

“The eccentricity and the scale of this installation has made it bigger than anything’s been before,” Egan said. “To do a Navy Yard installation is hilarious, because obviously the subject matter is ideal, and it ticked the box of an old dilapidated space — the rust of the building really works well with the fresh, clean nylon, and the boxy, square shape [of the building] works with the curves [of the tentacles].”

What inspired Egan and Estrellas to focus on tentacles, you might wonder? Egan said the pair like to work with a theme of “nature taking over the world.”

“Our stuff is really big and blows around in the wind and becomes animated,” Egan said. “So it actually is alive. I think it resonates with different people for different reasons, but there’s a longstanding culture and recognition of tentacles as the monster beneath — in fact, we had a visitor at the Navy Yard who was really upset that they weren’t allowed into the building to see the rest of the sculpture.”

According to a Facebook event page for the sea monster send-off party, attendees will be able to meet and chat with Egan during the event. The champagne toast will commence at 6 p.m., and a countdown to “goodbye” will begin at precisely 7:59 p.m. A Dos Gringos Mexican Kitchen food truck will be on the scene.

It’s a sendoff party worthy of a sea monster that, in Egan’s words, has “been welcomed by the people of Philadelphia.”

Sea Monsters HERE is located at 13th Street and Flagship Avenue in the Navy Yard. Never been to the Navy Yard before? We’ve got you covered: Here’s our handy guide to getting to the exhibit at the South Philly boatyard and business campus, whether by public transportation, bike, car or shuttle.

A civically engaged sea monster, now that’s not something you see every day! #NavyYardSeaMonster

LAST WEEKEND: Lovers of the #NavyYardSeaMonster, don't forget this is your last weekend to check out the monster before she returns to the sea… Open everyday 6am-8pm through 11/16! (Photo by @becky_heart_spa)