The Best Thing That Happened This Week: The Navy Yard Got Legs 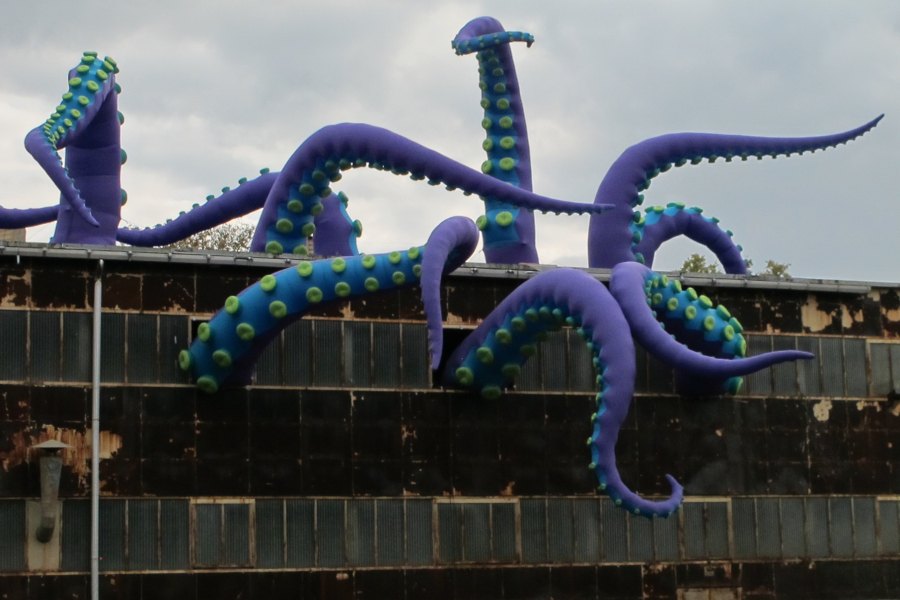 When I was a kid, growing up in Glenside, we drove into the city regularly — to visit relatives, go to museums, see the Wanamaker’s Christmas show. We came down Kelly Drive (then the East River Drive), and as we did, we passed a whole succession of stuffy white-guy statues: Abraham Lincoln, Anthony Wayne, Ulysses S. Grant, a Pilgrim, a cowboy, all those freaky dudes in the Ellen Phillips Samuel Memorial. (I’m just gonna say it: Lipchitz was a hack.) It was pretty much the U.S. Senate until you got to Joan of Arc, so bright and pretty and shiny, so much cooler than those other guys.

And I thought she was cool.

Well. On Monday, which just happens to be International Octopus Day, the Navy Yard came under attack by a vast blue-and-purple something with 20 legs as much as 40 feet long sprouting out of a warehouse’s windows and roof. The installation by Filthy Luker and Pedro Estrellas, organized by Group X, is weird and wonderful and on view through November 16th, so hurry on down.

There are a couple different ways to think about the city’s shift from public art that celebrates politicians and military generals and whatever the hell Lipchitz was doing to public art that makes you laugh in delight. One could posit that we’ve devolved into a people who don’t take much of anything seriously — who no longer have heroes to commemorate. One could contemplate the brouhahas over Mayor Rizzo’s memorial and the Rocky statue and conclude that in this world gone P.C.-mad, it’s safer to celebrate sea serpents than risk getting toppled like poor Thorfinn Karlsefni. (Vikings suck, anyway.)

Or you could be forgiven for regretting that Sea Monsters HERE will only be sticking around until November 16th, while The Spirit of Enterprise is apparently ours forever. Suckers.