The lengthy magazine piece reveals that Krasner was a victim of violent crime a decade ago — and that he wore a long ponytail until he was 40. 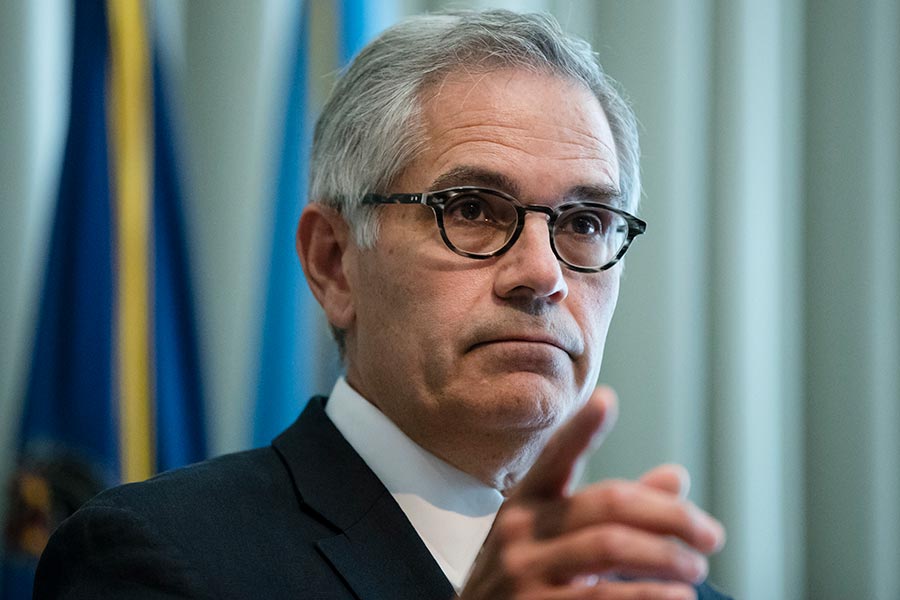 Staff writer Jennifer Gonnerman’s lengthy piece on Krasner was published on the magazine’s website on Monday. The story chronicles Krasner’s journey from public defender to defense attorney to the District Attorney’s Office and analyzes what his progressive and somewhat unprecedented reign means for the city and the nation.

Much of the information Gonnerman included will be familiar to Philadelphians, but the piece is nonetheless worth reading. She weaves what we know into a concise, digestible, and informative narrative and reveals some new nuggets of information (like that Krasner wore a long ponytail until he was 40).

Below, we look at six highlights from the New Yorker story on Krasner.

1. The publication views Krasner as a sign of change “at a local level.”

Gonnerman frames the nation’s criminal-justice system as “built on … misinformation” arising from the belief that the violent crime rate is increasing across the country (in fact, it’s fallen over the past quarter century) — a notion that she writes was “exploited” by President Donald Trump’s campaign. But Krasner, Gonnerman notes, is one of about two dozen notable “progressive prosecutors” who are looking to reform criminal justice and combat the country’s colossal incarceration rate starting with their own offices.

2. Krasner has removed portraits of former Philadelphia district attorneys from his office.

Previously, the faces of former Philly district attorneys Arlen Specter, Ed Rendell and Lynne Abraham hung in the mezzanine of the Philly DA’s Office. But Gonnerman writes that Krasner removed their portraits. Why? He apparently didn’t like that the city’s two African-American district attorneys, former interim DA Kelley B. Hodge and Seth Williams, weren’t featured. Though, in regard to Williams, Krasner told Gonnerman that “it’s a little hard to love putting up a picture of a DA who is currently doing five years in jail.”

3. Krasner’s training of new assistant district attorneys includes visits to prisons and a sleepover at a homeless shelter.

The Philly DA’s Office welcomes a class of new prosecutors every fall. For their eight-week training this year, Krasner linked up with Prosecutor Impact, a nonprofit run by former-prosecutor-turned-reformer Adam Foss. According to Gonnerman, Foss planned a visit to a prison to speak with men who were sentenced to life behind bars as teenagers, as well as a “sleepover at a homeless shelter,” to expose the prosecutors to “the realities of homelessness and addiction and mental illness and danger,” Krasner said.

4. The DA’s Office has launched a big search for new prosecutors this fall, in the form of a tour to law schools across the country.

Krasner told Gonnerman that the DA’s Office, which in the past has recruited prosecutors largely from Philadelphia-area law schools, felt “insular.” So he and staff are visiting 29 law schools this fall, including Harvard, Yale, Howard, Stanford (from which Krasner graduated in 1987), and more.

5. Krasner was a victim of violent crime a decade ago.

Gonnerman states that Krasner was attacked outside his office by two men ten years ago, in which one of them slashed Krasner’s face with a razor blade. The DA “rarely speaks about the incident,” Gonnerman writes, and mostly uses it to “make a point about how victims of crime often desire something other than what the criminal justice system provides.” Krasner told Gonnerman that the criminal justice system doesn’t always go far enough for victims in that it typically neglects to offer them solutions that are “restorative, where the person who harmed you will somehow make up for it.”

6. The DA’s Office is in a “tug-of-war” with the police department’s Internal Affairs division.

The New Yorker story includes a reference to a list made by the DA’s Office under Seth Williams, which included the names of 66 current and former police officers who were identified as facing allegations of misconduct (including Reggie Graham, who arrested rapper Meek Mill in 2007). Twenty-nine of those employees, whose credibility as court witnesses were called into question by the office, were placed on a “Do Not Call” document. Krasner told Gonnerman that his office is attempting to obtain records from the police department’s Internal Affairs division to amass a more extensive file, but that the two are “in the middle of a tug-of-war” over the records. Krasner told the New Yorker that if the department doesn’t collaborate, “we’ll sue them.”