He's turned the gubernatorial race up a notch. Or 10. 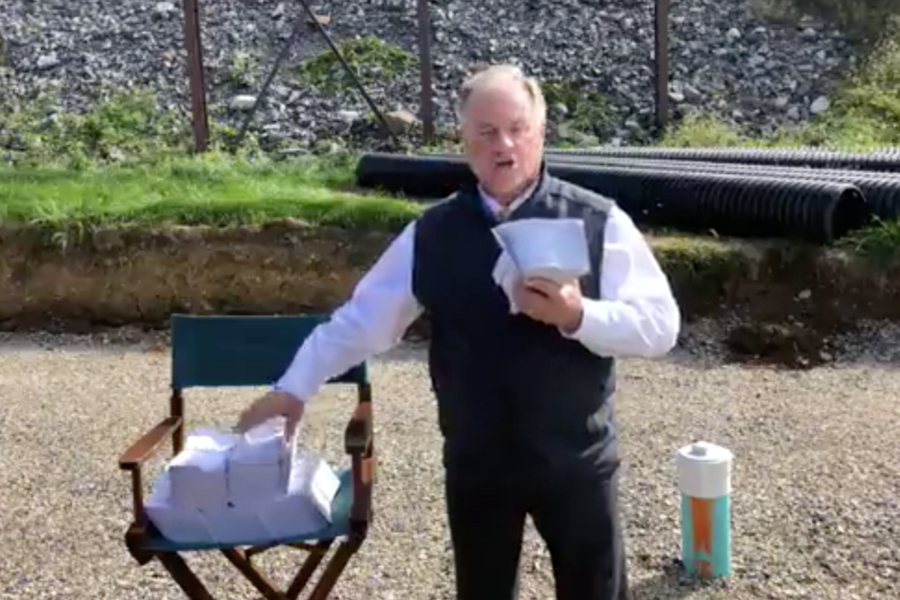 Scott Wagner said he would “stomp all over” Tom Wolf’s face with golf spikes on Friday. | Image via Scott Wagner’s campaign/Facebook

Scott Wagner is not pulling any punches in the Pennsylvania gubernatorial race. Or stomps. With golf spikes.

He made this very, very clear in a now-viral campaign video on Friday.

“Governor Wolf, let me tell you,” Wagner yells at the camera in the clip, while standing beside a fold-up chair stacked with his company’s paychecks near the side of a highway in York. “Between now and November 6th, you better put a catcher’s mask on your face, because I’m gonna stomp all over your face with golf spikes — because I’m gonna win this, FOR THE STATE OF PENNSYLVANIA, and we’re throwing you OUT OF OFFICE!”

Full video of GOP candidate Scott Wagner threatening Gov. Tom Wolf: “You better put a catcher’s mask on your face because I’m going to stomp all over your face with golf spikes.” pic.twitter.com/Whh6TdsOXz

The video, in which Wagner wears a navy vest over a baby-blue dress shirt, is making the rounds on Twitter. It was originally posted to Wagner’s Facebook page, which a caption stating that “Scott has a blazing message for Tom Wolf.”

Beth Melena, a spokesperson for Wolf’s campaign, said the video “shows [Wagner] is unhinged and unfit for office.”

“Threats of violence have no place in society, especially from someone running for public office,” Melena said. “This is part of an unfortunate pattern with Scott Wagner.”

Meanwhile, a spokesperson for Wagner’s campaign said his comments “were not to be taken literally.”

“He wanted them to be a metaphor for how he will approach the final stretch of the campaign,” his spokesperson said. “Tom Wolf has spent the entire race hiding behind false and negative attack ads like a coward instead of debating in front of the people of Pennsylvania and Scott will spend the last month of the race making it clear to voters why they should not give him a second term.”

Really, honestly, we’re not sure what to say about the footage.

I do take comfort in the fact that if Wagner actually tried to do this, @JohnFetterman could hit him with a White Russian Leg Sweep followed by a corner slingshot splash Vader Bomb. https://t.co/zxG70sXl8o

over/under on how many times wagner recited this threat in the mirror https://t.co/tXKpPatF9j

The best explanation I have for this is that @Lynn88Swann bet him that Wagner couldn't finish below Swann's 39.6% against @GovEdRendell in 2006. https://t.co/XupFrg1ZUA

Whether you are a Republican or Democrat, conservative or liberal, take @realScottWagner’s threat about @GovernorTomWolf in this video literally or just see it as a metaphor — no matter — we’re in new, strange territory for a PA statewide race.https://t.co/si1HaG5iHZ

Gonna go out on a limb here and say we shouldn't elect Scott Wagner to be governor of PA! https://t.co/ShrZnJzMIR

his ability to mix sports analogies is something

I have never witnessed the type of political meltdown that Scott Wagner is currently having. He is literally yelling on the side of a road and threatened physical harm against Governor Wolf.