How to plan the city's best bash ever — in just a few weeks. 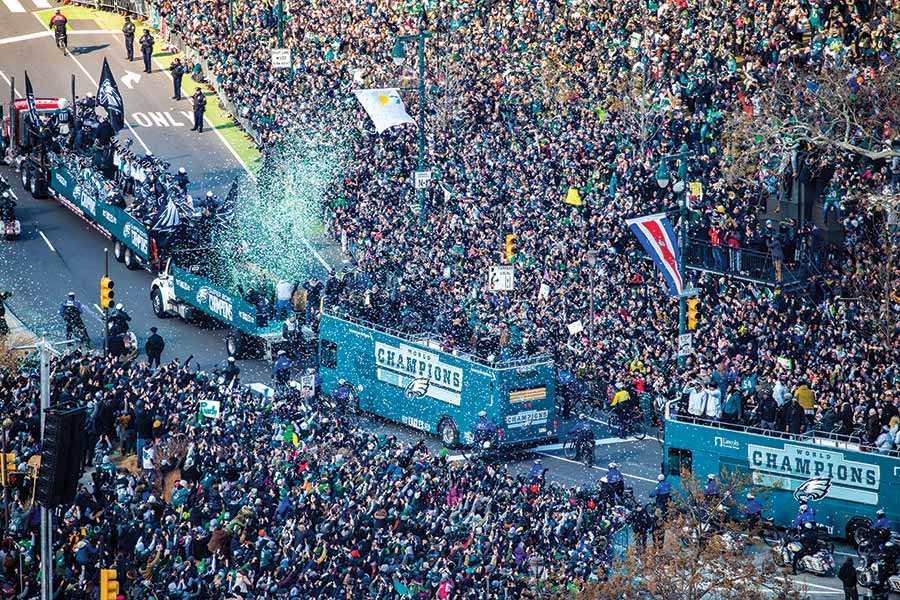 A week before the Super Bowl, father/son event planners Fred and Neil Stein of the Creative Group got a phone call from the Eagles: You wanna throw a parade, maybe?

Here’s just a taste of what came next. Keep in mind Fred’s mantra: “If guests don’t know something happened, then nothing went wrong.”

Fred: They were anxious that it all be kept confidential. And they were very superstitious. They didn’t want to jinx the game.

Neil: So there couldn’t be any contracts. Everything was hypothetical. We were telling vendors: “Suppose we need 14 Jumbotrons for next Wednesday, and we can’t tell you anything more?”

Fred: By Monday, the forecast for Wednesday said rain, so we used Thursday, the rain date.

Neil: We look at it from three different angles: the spectators, the vendors and the crew. Do they have access to Port-o-lets? To food? How do they get in? Where do they report? How are they credentialed?

Fred: We’re a stickler for timelines. We plan it out by the second. So the parade was set to leave from Broad and Pattison at 11 o’clock. Very shortly—

Fred: The lead police car called and said, “The parade stopped.” We tried to find out why, and the police lead said the players were getting out of the buses. We said, “Just go with the flow.”

Neil: What else are you going to do?

Fred: We built in an extra hour between the end of the parade and the ceremony. Even so, we were half an hour late. We had a military flyover scheduled for the end of the ceremony. The pep band would be playing “Fly Eagles Fly,” and there would be a flyover — get it? But when the ceremony was delayed, we had the flyover at the opening, with the National Anthem. There wasn’t anything else we could do. They were already in the air.

Neil: One real surprise was Kelce with the expletives. We had live coverage on the Jumbotrons.

Fred: It was wonderful. Everyone was so happy — the vendors, the unions. The Eagles were thrilled.

Neil: It doesn’t end for us until it’s cleaned up and every vendor is gone.

Fred: It’s like TV. There’s headlines, but we still have breaking news. And Jason Kelce using the four-letter word was breaking news.