We get into our share of fights over things big and small, but we’d no more miss the chance to sit down with each other to watch the Birds than forgo an opportunity to watch a replay of the Philly Special … again. 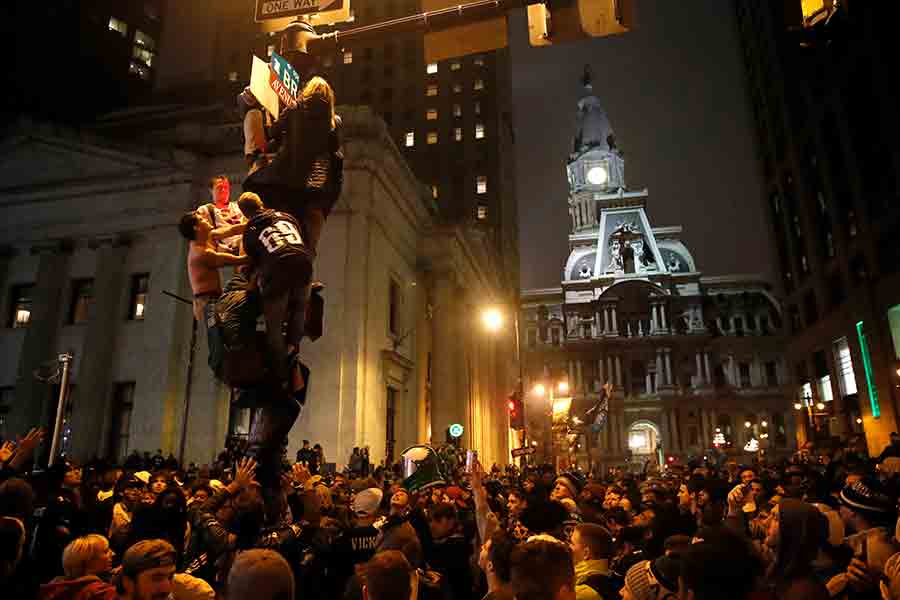 On the morning of February 4th, 2018, my daughter Marcy, then 28, was driving to our house from her home in Drexel Hill to watch the Super Bowl with her father and me. Near the Sanatoga exit of Route 422, she hit a patch of ice, skidded toward the median, overcorrected, and spun back across the two westbound lanes and off the road. Her car somersaulted several times before coming to rest on its roof in patchy undergrowth. As Marcy hung upside-down in a web of seat belts and expanded airbags, she told the EMTs who were attempting to extricate her, “Today is a very important day for my parents. I don’t want you to tell them about this.”

The point of this story isn’t that Marcy is an Eagles fan. She isn’t. She couldn’t care less about football in any shape or form. The point is her respect for the fandom of her dad and her brother and me, to the extent that it was foremost in her mind just moments after a harrowing brush with death. Even though she couldn’t name a single player on the team if you put a gun to her head, she understood in her marrow what it meant that the Eagles were in the Super Bowl, because she’d been steeped in that tea all her life.

This, I think, is at the heart of Eagles fandom. Sports fans in our city have a reputation for boorishness, but we’re only louts to outsiders. Amongst ourselves, we’re as gentle as a cotton ball. We’re like the citizens of a city under siege, parceling out tidbits of sustenance: Thank God we’re done with Chip! And: Did you hear we’re getting Chris Long? Fifty-eight years between championships will teach you to spin hope out of the slimmest of fibers. We don’t disdain those among us, like Marcy, who don’t give a damn about the team, because they, in turn, are tolerant of our obsession, cheerfully scheduling family funerals and weddings and birthday celebrations around that sacrosanct season stretching from September to, well, February, occasionally.

This is odd, because we’re not by any means a single-minded city. We have grave differences of opinion on everything from cheesesteaks vs. roast pork to bike lanes to DA Larry Krasner to Donald Trump. We bitch and moan and undercut each other at every opportunity. (See: City Council, Sam Hinkie, Ori Feibush, Meek Mill.) Don’t believe me? Check out the comments on Philly.com. If you dare.

I’m here to admit, not exactly proudly but honestly, that when my husband came bursting into the bathroom where I was taking a shower on the morning of February 4th to report that Marcy had been taken to the hospital by ambulance after rolling her Mazda, my first thought was: She had better not make me miss the game. Just as her first thought had been: I had better not make them miss the game. My daughter and I were perfectly simpatico. We shared priorities. She was released to us well before opening kickoff, without so much as a scratch.

Which made me think: We really are the City of Brotherly Love. We’re like any family — like my family, full of drama and jockeying and fronting, with big fights over small stuff and small fights over big stuff and nobody ever willing to give in. And yet we’d no more miss the chance to sit down with each other (and Merrill and Mike) for our Sunday dinners of Bears and Rams and Dolphins than forgo an opportunity to watch a replay of the Philly Special … again.

In a world that seems constantly ready to split along its axis, how lucky are we to have this team to bind us, give us ballast, get us past divisions of race and wealth and neighborhood and religion to what’s at our core? We are Eagles Nation, land of the underdog and home of the brave, and greased poles can’t stop us. No one likes us. We don’t care! On Monday, we’ll go back to arguing about charter schools and Welcome America and that new Temple stadium (unless, of course, we have the night game). For these three hours, this is our team and our town.