We chat with the venture capitalist turned human rights advocate known as “Alt-Facts Kelly” on Trump, fashion, and why “protest is never a drag.” 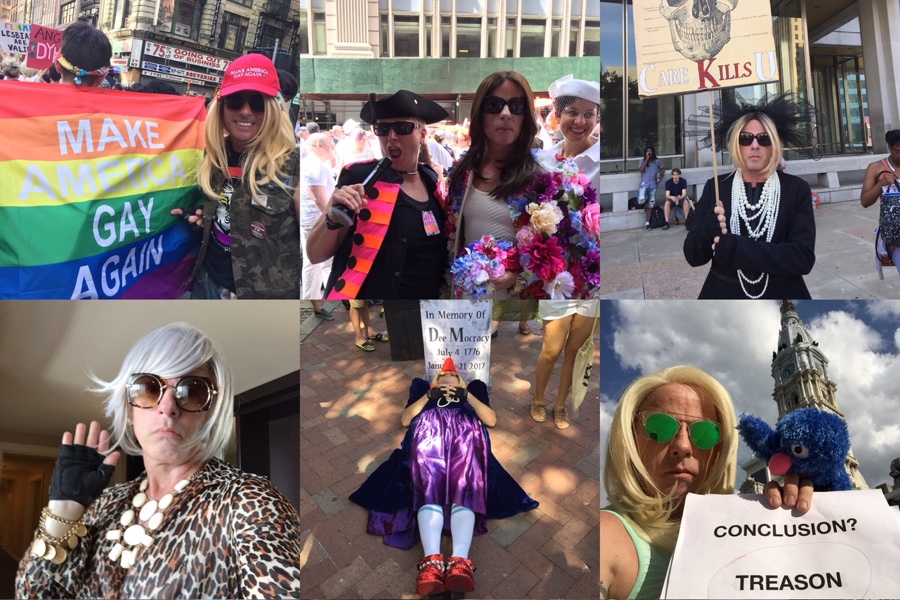 Mike Hisey in many of his signature costumes.

Mike Hisey is a longtime community activist and public speaker. We chat with the venture capitalist turned human rights advocate on Trump, fashion, and why “protest is never a drag.”

Tell us a little bit about yourself.
I am 55 and just moved back to the city. I grew up in a suburb of Philly and also lived in Fort Lauderdale for 20 years. I spent 23 years building multimillion-dollar Fortune 500 telecom installation companies through M&A and organically built platforms for private equity owners and firms based in King of Prussia. I worked my way up to partner/ownership in a new venture but was terminated when the owner discovered I was HIV-positive and almost lost my life to AIDS in 2010. Imagine the Tom Hanks movie Philadelphia in 1993, only 25 years later and we still face discrimination in the workplace. I have also always been an artist, actor, writer, and costume designer.

You’re been a social justice activist for decades, but your following has definitely grown over the past year. What do you think has contributed to the rise of your persona “AltFacts Kelly”?
I have to admit that the first protest as Kellyanne Conway was done on pure adrenaline. I had a dream after her infamous “alternative facts” interview on CNN that I was arguing with her and she was in the Gucci coat in a Barbie box protected by plastic. I went out the next day and purchased a wig, coat, and accessories. I painted the coat to match, but could not find gold cat buttons. The cat patches were a last-minute find, but they worked.

I imagined that it would not be well-received, but it was quite the opposite — they loved it. I protested with 10,000 Philadelphians converging on Trump and his GOP regime at Loews hotel the first week of his administration. Two weeks later at the Stonewall Inn in NYC I was approached by a reporter, who did a feature of my work for Vanity Fair. Vogue magazine also did an interview.

I was not social media savvy at all, but several celebrities took to my work right away. I credit actor John Wesley Shipp with posting my pics and creating my hashtag #altfactkelly. Fast-forward and Rosie O’Donell regularly retweets my work and helps me get out the message. There are over 40 different looks and several new ones to debut this year.

Your wardrobe at protests has definitely garnered attention for its out-of-the-box messaging. What inspires your eye-popping activist apparel?
My motto is “Protesting Is Never a Drag.” I am inspired by activists and artists of the ’80s like Marsha P. Johnson, Jean Michel Basquiat, and Keith Haring, who remain pioneers of our movement. I love vintage fashion and try to incorporate it wherever possible. “The dress is for the crowd, the sign is for me” is one key principle. I also like to put additional messages on the back of the clothes.

Your social media accounts have definitely thrown lots of humorous jabs at the Trump administration. What issues did you advocate for prior to Trump’s election, and how similar are they to the ones you speak up for now?
Thank you. I go hard on them all and believe “you should leave no stone unturned.” I make it a point to show up at events where Kellyanne, Betsy DeVos, Melania or Ivanka will be in attendance.

I started advocating for social injustice of the homeless at 14 years old. Back then you volunteered and posted flyers to get attendance at a protest. When I came out at 25, I added advocating/fund-raising for LGBTQ rights in 1988. In response to the AIDS epidemic in 1990, I began fund-raising and activism for that cause and turned it up a notch when I almost lost my life to AIDS in 2010. I was the top individual fund-raiser for three years, 2012 to 2015, with more than $100,000 in donations.

I am also proud to have worked with my mentor Arnold Abbott for 20 years in feeding and rehabilitating the homeless in Fort Lauderdale. To date we ahve helped 500 homeless people back into jobs and homes and served over 500,000 meals. Arnold was a pioneer in white activism for racial injustice in the ’60s. I learned so much from him and will always be an ally to my friends who experience racial injustice. The current administration is violating human rights on a daily basis. It is an attack on everything I have ever fought for and feel passionate about regarding human dignity and equality. I started protesting Trump long before he illegitimately stole this election and I will continue to protest him until he is in prison.

If you only had one piece of advice for those trying to find the rainbow at the end of this current political climate, what would you tell them and why?
I would tell them to love themselves, as nothing else will ever be more important in their life.