Two customers say they’ve found handouts that read “God hates the hand that sheds innocent blood” — and contain images of a fetus — in items they purchased from the store. 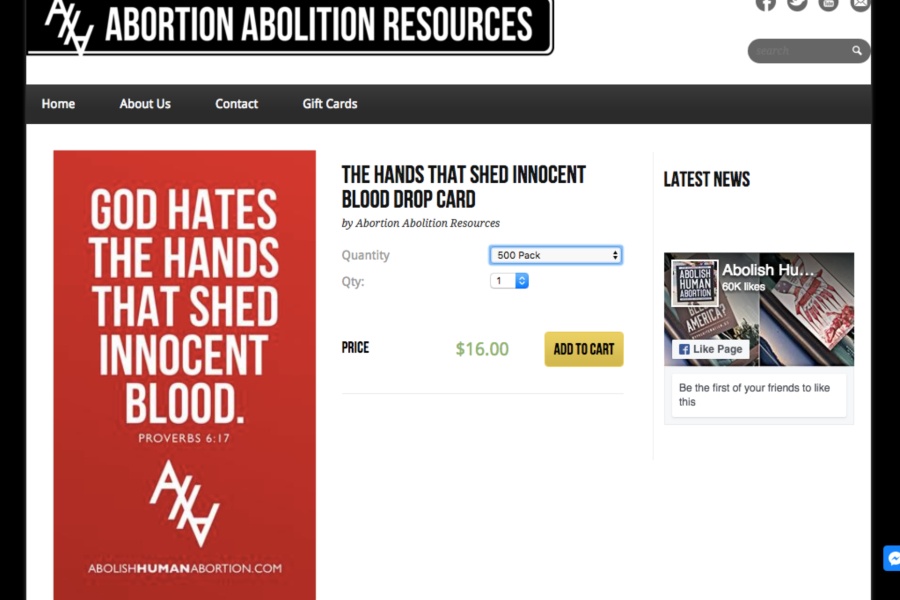 Two King of Prussia Wegmans customers say they were stunned this month when they found graphic anti-abortion flyers in products they purchased from the grocery store.

The flyers, which advertise for abolishhumaanabortion.com, read “God hates the hand that sheds innocent blood” and contain images of a dead fetus.

A Wegmans spokesperson told NBC10 that as a result of the complaints, employees scanned for other anti-abortion handouts — and found at least 10 more hidden in other items in the store.

“We have no idea who placed the cards in the products,” the spokesperson told the news organization. “Our security team is conducting an investigation to determine next steps.”

One Wegmans customer, Annie Weiss, said she found the flyer in a box of Luvs diapers in July. In a Facebook video that’s no longer publicly available, Weiss said the discovery was “just too fucking batshit crazy to not say something about.”

“This is not OK,” Weiss says in the video. “In a pack of fucking diapers — are you out of your minds?

“Now, trust me, I don’t think Luvs put this in their boxes,” she adds. “I’m almost 100 percent positive it wasn’t them. I think it was some psycho, crazy anti-abortion person who slipped it into these open handles here.”

The founders of Abolishumanabortion.com refer to the site as a “coalition” that’s part of the abortion abolitionist movement, which aims to eliminate abortion entirely as “an obligation to the people of God.”

“Following in the footsteps of former abolitionist movements, we aim to end one of the greatest human miseries and moral evils ever to be entrenched in our world,” the website reads. “Human beings are created in the image of Almighty God, the very Creator of the universe. The weakest and most helpless among us have been subjected by this wicked culture to accepted, legal, and systematic destruction.”

The group has compared abortion to slavery and the Holocaust. Members sell anti-abortion shirts, signs, pins, stickers, Christmas cards, and “drop cards,” including the ones recently found in Wegmans. A pack of 500 cards is available for just $16.

“One of the primary jobs of an abortion abolitionist is just to get more people thinking and talking about abortion,” the website reads. “These ‘drop cards’ are designed to facilitate just that.”