Footage shows the woman filming an “awful big turtle” in her creek before she pans to the gator and yells. 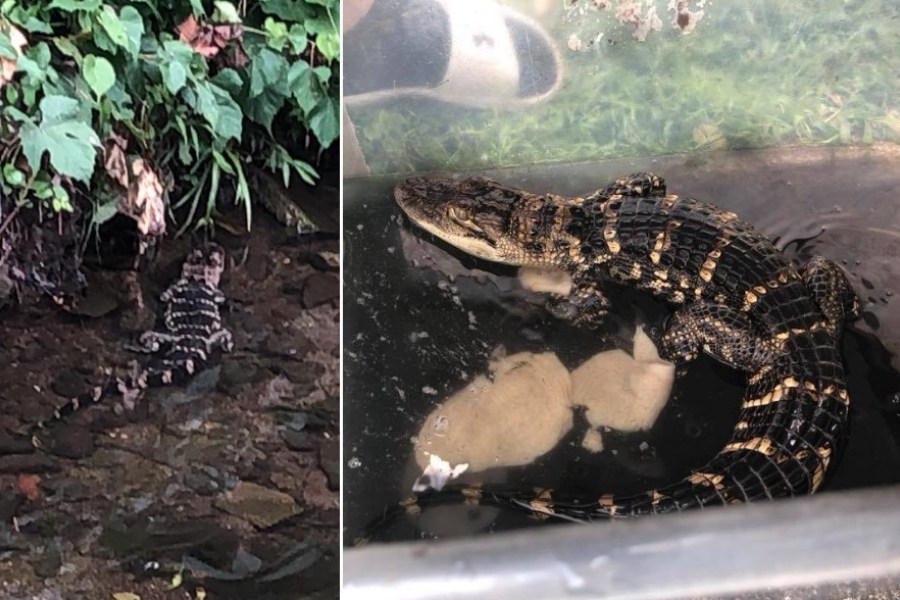 A Delaware County woman found an alligator hanging out in her creek on Sunday.

According to 6ABC, Tracie Hoffecker discovered the reptile in her yard in Prospect Park on Sunday morning, after several reports of a gator had the neighborhood on high alert last week.

Video shared by the news organization shows Hoeffecker filming a turtle when she appears to find the alligator.

“You’re an awful big turtle,” Hoefeccker says before panning the camera to the gator and yelling, “Oh my God, there’s an alligator in my backyard!”

Hoeffecker told the news organization that she immediately called her cousin, a Philadelphia firefighter, when she saw the reptile.

Her cousin helped her capture the two-to-three-foot gator, and then they turned it over to a rescue organization called The Slimy, Scaly, Taily Reptile Rescue, based in Souderton.

The Prospect Park Police Department posted photos of the gator to Facebook on Sunday, reminding the public that releasing gators (or any non-native species) into the wild is dangerous and illegal.

“As beautiful as these creatures are, releasing them into the crick (yes I said crick) is not only inhumane and irresponsible, it’s also illegal,” the police department wrote. “We are in the process of contacting the PA Fish & Boat Commission Bureau of Law Enforcement to investigate this incident further.”

American alligators mostly stick to freshwater environments in the southeast, including Louisiana (where they’re most populous), Florida (where they live beside crocodiles), parts of Georgia, Alabama, Mississippi, coastal South and North Carolina, East Texas, Oklahoma and Arkansas.

Needless to say, they aren’t native to the Philadelphia region — though this isn’t the only gator discovered recently in the area: police officers found one when they were called to a Tacony row house for a fire last spring.