Cyclists to Wawa: Get Your Delivery Trucks Out of Bike Lane
Subscribe
Follow
I'm a scraper
This search result is here to prevent scraping

Cyclists to Wawa: Get Your Delivery Trucks Out of Bike Lane

After a cyclist was hit recently along 22nd Street, protesters formed a human wall to call attention to the lane’s deterioration — and frequent blockages. 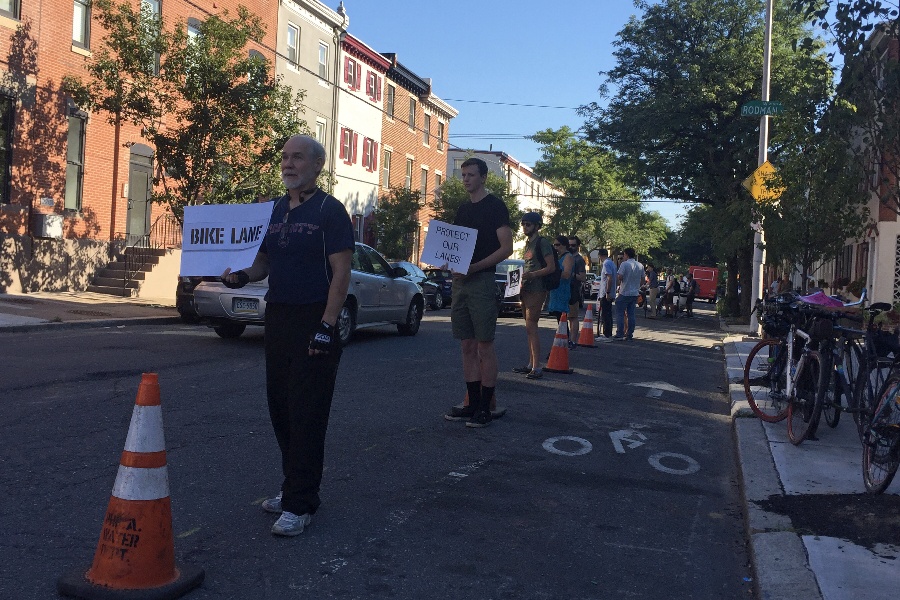 Cyclists formed a human wall along the 22nd Street bike lane in Graduate Hospital on Tuesday morning to call for increased safety measures along the popular route.

Their concerns? The bike lane, which stretches from Passyunk Avenue in South Philadelphia north to Fairmount Avenue (but is broken up at several intersections north of Spring Garden Street), needs to be re-striped — it’s been worn down to the point that it’s difficult to see. Plus, it’s frequently occupied by cars, trucks and delivery vehicles that stop outside the Wawa and the 7-Eleven between South and Lombard streets, where protesters gathered on Tuesday.

More than two dozen cyclists stood outside the bike lane between 8 and 9 a.m. on Tuesday, protecting cyclists from passing cars. The protest was organized by James Gitto, a volunteer for urbanist political action committee 5th Square, and advertised by the Bicycle Coalition for Greater Philadelphia.

“This is the only corridor for cyclists between South Philly and Center City, and it’s been deteriorated,” LoBasso said.

Roughly 241 cyclists use the 22nd Street bike lane per hour, according to 2017 counts by the Bicycle Coalition — although more cyclists were observed this morning, the group said. Many cyclists passing through the bike lane on Tuesday morning smiled, high-fived and thanked those who formed the human bike lane. The wall of pedestrians ran nearly a block, from South Street to just short of Lombard Street, where a delivery truck parked outside 7-Eleven around 8:15 a.m. 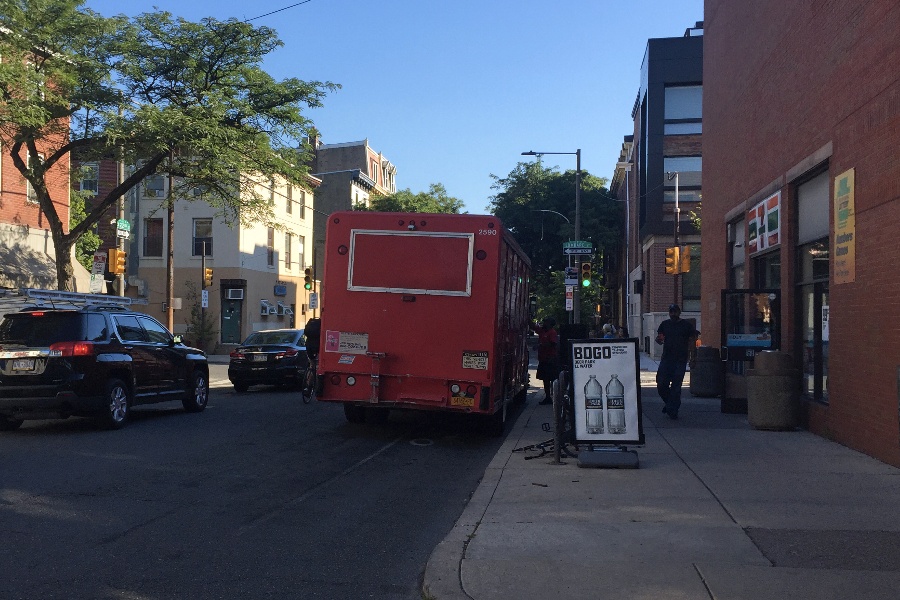 A manager at the 7-Eleven location was not immediately available for comment on Tuesday. Asked to comment on the protest, a spokesperson for Wawa offered the following response:

“At Wawa we are committed to doing everything we can to ensure our delivery vendors are following proper process to avoid impacting the bike lanes in front of our store. In addition we are open to accommodating signage to help ensure everyone complies with parking regulations.”

The Bicycle Coalition has suggested that the city create a loading zone for delivery trucks in the area in addition to re-striping the lanes. It’s not clear when the 22nd Street bike lane is due to be re-striped; Kelly Cofrancisco, a spokesperson for the city’s Office of Transportation and Infrastructure Systems, said the organization is working with the Streets Department “on future plans to repave and re-stripe 22nd Street.”

“Changes to the markings or additional elements related to the bike lanes will be made through the City’s normal process of close coordination with Council and local stakeholders,” Cofrancisco said.

The PPA has issued violations to cars that park in bike lanes for years, and such tickets are on the rise. So far in 2018, the organization has issued 34 tickets to vehicles that were illegally parked near 22nd and South streets.

When cyclists got to 22nd street for human bike lane, a @Fritolay truck was already blocking the lane. pic.twitter.com/F8oywfJutC

The protest on Tuesday comes roughly a week after a cyclist was hit by a car while trying to pass a vehicle in the 22nd Street bike lane just past the South Street intersection. That woman was not hurt.

“Unfortunately, this is the sort of crash that doesn’t need to happen,” the Bicycle Coalition said in a recent blog post.

Sign our petition: Tell Wawa, the PPA and the City of Philadelphia to keep cars out of the 22nd Street bike lane. https://t.co/mTirbyFitV #visionzero