Eakins Oval Is Getting a “Family Friendly” Extension for Summer

Several lanes of the Benjamin Franklin Parkway will shut down to turn the public space into a “pedestrian haven.” 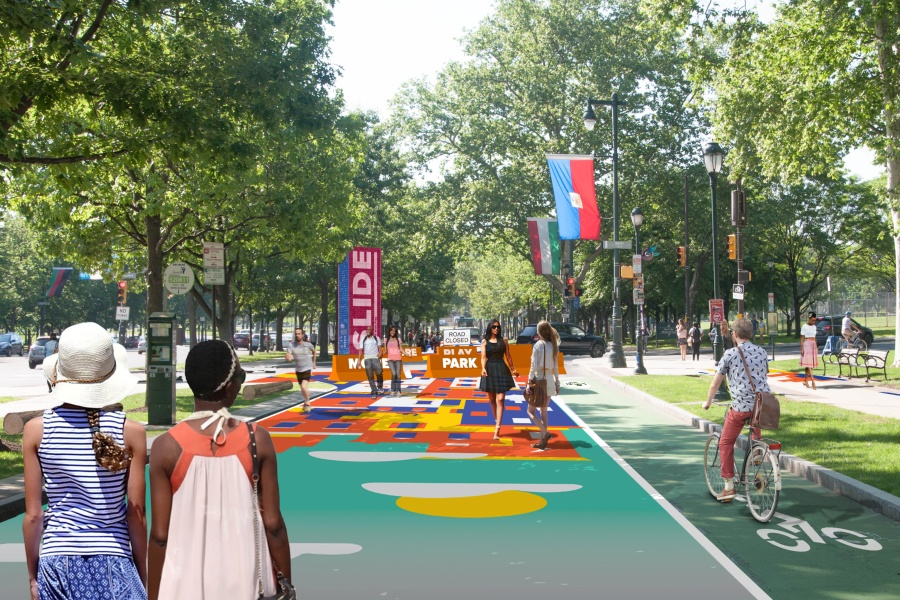 This summer, Eakins Oval park will be bigger than ever — so big, in fact, that it will spill out beyond the Oval itself.

For roughly seven weeks in July and August, a portion of the Benjamin Franklin Parkway will be closed to vehicular traffic to allow the road to be transformed into a “giant promenade” for a project called The Oval+.

The park’s theme this year is “More Park, More Play” — and by clearing road space for pedestrians, the extension will allow for just that. The move is essentially what previous visitors said they wanted: Many had safety concerns about crossing the busy Benjamin Franklin Parkway’s multiple lanes of traffic (especially with small children), according to public feedback received last year by the Fairmount Park Conservancy and Philadelphia Parks and Recreation. Park-goers also said they wanted to see more family-related activities — so this year, Mayor Jim Kenney said, the Oval will be “more family-friendly than ever before.”

“This year’s expansion of The Oval+ will not just make the Parkway more accessible — it will also invite people to interact with the Parkway in ways they’ve never been able to before,” Jamie Gauthier, executive director of Fairmount Park Conservancy, said in a statement. “We’re excited to see how residents and visitors alike use this seasonal gem.”

So how will it work? From July 5th to August 26th, the outbound outer lanes on the north side of the Parkway will be closed to vehicles between 20th Street and Art Museum Drive. The outbound Parkway bike lane will remain open. Vine Street traffic will be directed to the Parkway inner lanes or to make a right onto 20th Street. The promenade itself will be open from July 20th through August 19th. 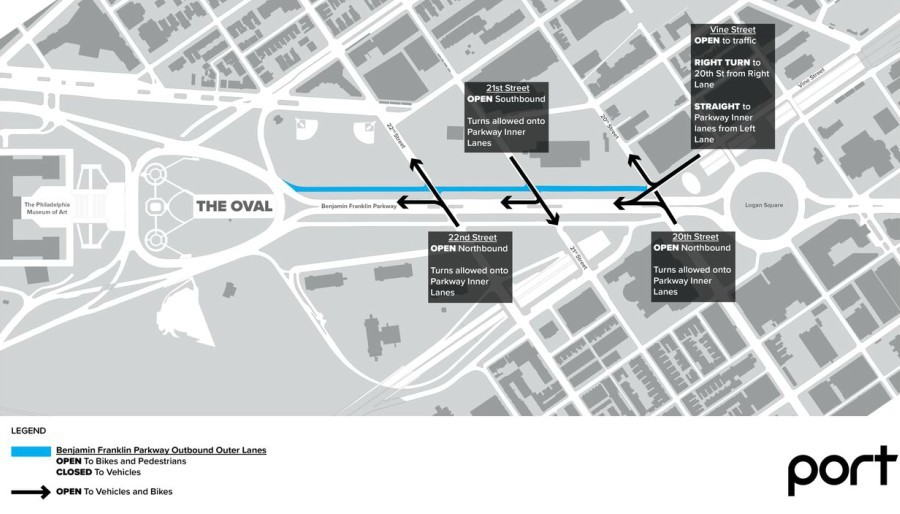 Mural Arts Philadelphia executive director Jane Golden said visitors will also see an additional 22,000 square feet of artwork at The Oval+ this year. Each closed Parkway intersection will feature a large-scale mural designed and installed by Mural Arts, as well as design and illustration studio The Heads of State. More than 30 artists will work on the project through Mural Arts’ re-entry program for formerly incarcerated individuals.

You’ll also see an 800-square-foot sandbox, a seating platform with views of the Art Museum and City Hall, a ribbon pavilion that “creates fantastic patterns of sun and shadow throughout the day,” and a giant misting pavilion for cooling off, according to park organizers. The Oval+ will also feature food trucks and programming between 11 a.m. and 11 p.m. Wednesdays through Sundays. For a list of activities, check out this calendar of events.