And they want your help. If the goal is met, fans would get a free screening of the show — set in the MOVE house decades after the bombing — in September. 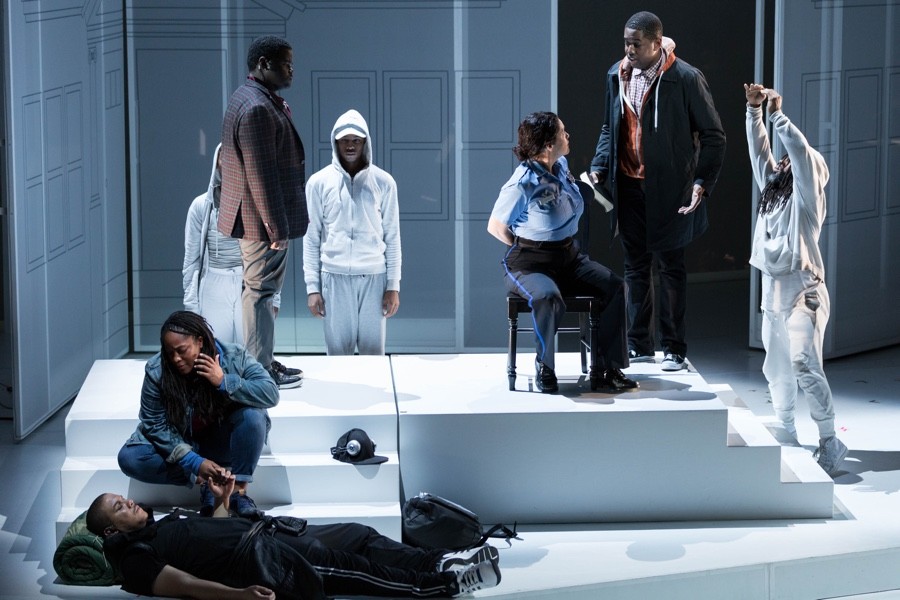 A scene in We Shall Not Be Moved, which enjoyed seven sold-out performances at the Wilma Theatre last September.

After enthusiastic receptions in Harlem and Amsterdam, Opera Philadelphia is bringing the highly-acclaimed We Shall Not Be Moved back to the city this fall. Well, at least a video version.

The opera, the live version of which enjoyed seven sold-out performances at the Wilma Theater in Philadelphia last year, is told through a fusion of spoken word, jazz, classical music, hip-hop, video projection and dance.

It follows five young teens on the run in West Philadelphia who seek refuge in a condemned house that had served as the headquarters for MOVE decades earlier.

The house was the site of the infamous MOVE bombing, which concluded a standoff between the group and the Philadelphia Police Department on May 13, 1985. After a police helicopter dropped an incendiary device on the Osage Avenue MOVE compound, the resulting fire killed eleven MOVE members, including five children, and destroyed 65 of the surrounding houses in the area.

In the opera, the teens make contact with ghosts who inhabit the house.

We Shall Not Be Moved is the brainchild of composer Daniel Bernard Roumain, who was inspired by poems Philadelphia high school students performed years ago for Opera Philadelphia’s Hip H’opera program. The show also features the talents of librettist Marc Bamuthi Joseph and director and choreographer Bill T. Jones.

“The creators of the opera created a piece that leads you to think about issues that face all of us, like racism and gun violence, education equity, national identity, poverty, and family, and maybe you leave thinking about them in ways you hadn’t been before you sat down to see it,” says Frank Luzi, spokesperson for Opera Philadelphia.

For the eighth Opera on the Mall event – an annual free opera video screening at Independence Mall hosted by Opera Philadelphia (last year’s had over 6,000 attendees) – viewers will hopefully be able to enjoy an HD screening of the show at the historic park on Saturday, September 29.

Earlier this week, the organization launched a Kickstarter campaign to meet the cost of screening the show for free.

While they’ve already sourced most of the $125,000 budget from private and corporate donors and sponsors, they’re asking the public to help them meet their fundraising target by contributing the remaining $25,000. According to the Kickstarter page, the project will only be funded if it reaches its goal by Friday, July 20th. As of press time, Opera Philadelphia had raised just over $6,000 from 85 Kickstarter donors.

This is the first year that Opera Philadelphia has turned to crowdfunding to cover some of the production expenses.

“Opera on the Mall has garnered a core audience of people who really love the event,” says Luzi. “Many people come to it year after year and don’t actually come to see operas in the opera house. We think that enlisting the public’s help in putting on this event that we all enjoy is a way to share ownership of the broadcast with the community that has supported us over so many years.”

He adds that they’re hopeful that they’ll meet their goal, and they’re excited to bring We Shall Not Be Moved back to the city and give more people an opportunity to experience it. For free this time.

“We hope that it will show people that opera can look and sound very different than maybe they think it does, and that contemporary opera like this one, which has elements of dance and spoken word, video projection and features different types of voices, is an art form for everyone,” Luzi says.