Convicted in the 1978 killing of a Philadelphia police officer, the 62-year-old grandmother of nine was paroled on Saturday, following letters of support from DA Larry Krasner’s office and others. 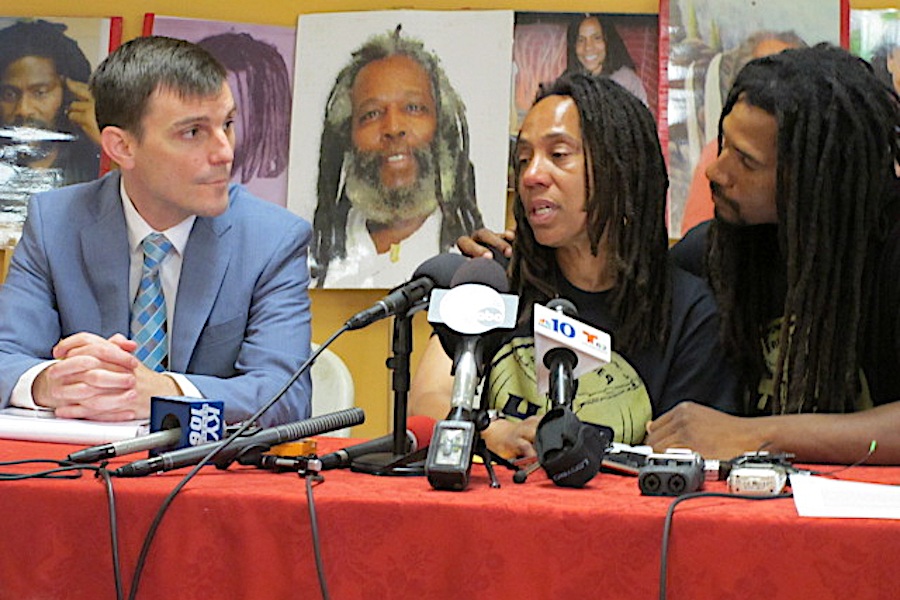 MOVE 9 member Debbie Africa with attorney Brad Thomson (left) and son Mike Africa Jr. (right). Behind her are photos of the MOVE 9. (Photo by Victor Fiorillo)

After spending more than 39 years in prison for her role in the 1978 murder of Philadelphia police officer James Ramp, MOVE member Debbie Africa has become the first of the so-called MOVE 9 to be released from prison. She appeared publicly for the first time on Tuesday morning, following her parole on Saturday.

“It’s a bittersweet victory for me,” the tearful 62-year-old grandmother told a crowd at Faith Immanuel Lutheran Church in East Lansdowne, going on to explain that there are still six of the nine members in prison for the crime. Two died in custody.

Africa was accompanied by son Mike Africa Jr., who was born in her prison cell and taken away three days later. His father is one of the MOVE 9 still incarcerated.

“Words can’t describe it,” Debbie Africa said of the pain she felt being separated from her son.

“People can’t grasp what we have experienced,” Mike Africa Jr. said on Tuesday. 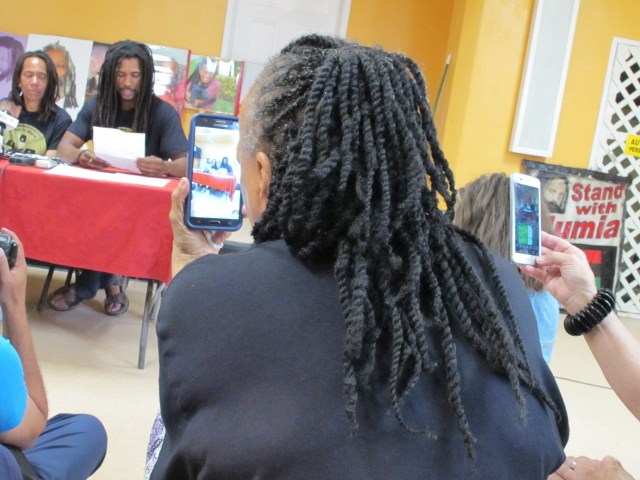 MOVE member Pam Africa was on Facebook Live during Debbie Africa’s first public appearance after being paroled on Saturday. (Photo by Victor Fiorillo)

The living members of the MOVE 9 became eligible for parole in 2008, but the Pennsylvania Board of Probation and Parole denied them every time until Debbie Africa’s surprise release. Brad Thomson, one of two attorneys who have represented the MOVE 9 in their parole applications, explained that MOVE 9 members Janet Africa and Janine Africa appeared before the parole board the same day as Debbie Africa but were denied, for reasons that he said he couldn’t grasp.

Thomson displayed a thick document that he said contained letters of support for all three women from former prison guards, former inmates who said that the women had helped them turned their lives around, and the office of Philadelphia District Attorney Larry Krasner.

“We made a recommendation of parole for all three prisoners,” Philly DA spokesperson Benjamin Waxman told Philly Mag. “Our office reviewed hundreds of pages of documents, including reports from experts in corrections and rehabilitation, prison records, physiological evaluations, employment and educational histories, and support letters from community members. It was our determination that after 39 years of incarceration their parole did not pose a threat to public safety.”

The 1978 shooting of Ramp, which the MOVE 9 have denied responsibility for, led to a long buildup of tension between MOVE and the city, culminating in the infamous 1985 MOVE bombing, in which 11 MOVE members, including five children, died in their home on Osage Avenue after a police helicopter dropped an incendiary device on the property.

“It was devastating,” Debbie Africa said, when asked about the moment when she learned about the MOVE bombing. “None of us believed it. It was total devastation. I still don’t really think that I let out all of my feelings and emotions from that.”

“Two of the children killed were theirs,” added Mike Africa Jr., referring to the children of Janet Africa and Janine Africa. “These people killed and murdered their children.”

Debbie Africa said she plans to spend her time getting reacquainted with her children and nine grandchildren, fighting for the release of the remaining MOVE 9 members, and just catching up with the world in general, which has changed drastically in the 39 years since she went to jail. For instance, she told the crowd, she’s trying to figure out how to work a cell phone.

Philadelphia Fraternal Order of Police president John McNesby could not immediately be reached for comment.