Lt. Jonathan Josey says that Philly brass is afraid his reputation will damage the department. 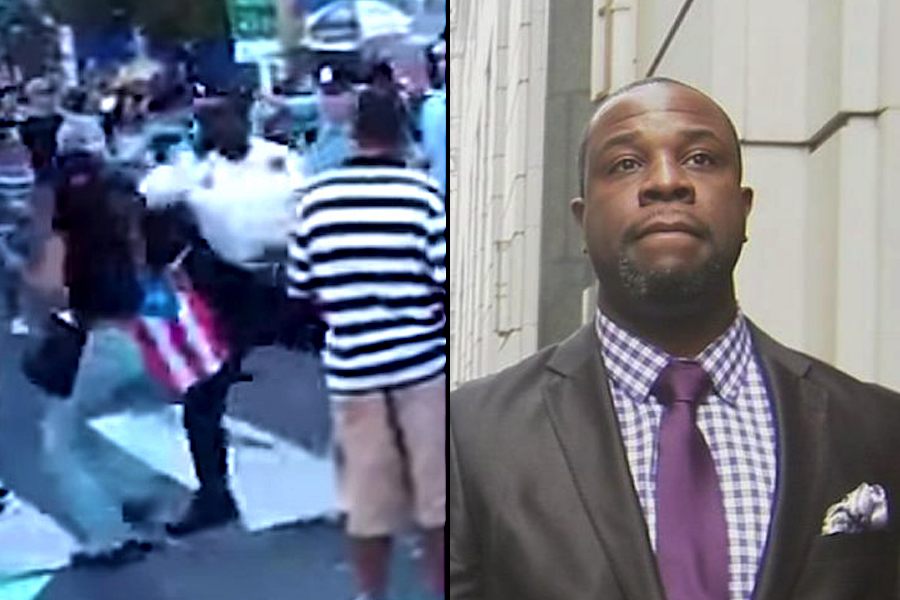 Left: A screenshot from the infamous video of Philly cop Jonathan Josey punching a woman at a Puerto Rican parade in Philadelphia in 2012. Right: Josey in a 6ABC image.

There are some Philly characters who, just when you think you’ve finally heard the last of them, pop right back up again. Boston Marathon Dad Mike Rossi is one. John Bolaris and Milton Street are two others. And then there is Philadelphia Police lieutenant Jonathan Josey, the man who went from Daily News Sexy Single to the Philly cop seen on viral video hitting a woman after a Puerto Rican parade.

Josey, a 46-year-old, 25-year veteran of the Philadelphia Police Department, has filed a federal lawsuit against the city, because the city hasn’t given him a promotion. But before we delve into Josey’s lawsuit, a brief recap for those of you who somehow forgot about this guy.

It was September 30, 2012. Philadelphia’s Puerto Rican Day Parade had just finished up, and a bunch of people wound up in the streets for a sort of afterparty.

Things got a little crazy and ended with Josey striking 39-year-old Aida Guzman for reasons that never became entirely clear. (Reports indicated that Guzman sprayed Silly String into the crowd, and the substance may have hit Josey; she was initially charged with disorderly conduct, a charge that was later dropped.)

Here’s the video that wound up going completely viral:

In less than a week, Josey was suspended, and Charles Ramsey, the police commissioner at the time, said that he intended to fire Josey. Sure enough, Josey was soon out of a job, and Guzman would later get a $75,000 settlement from the city.

But the Fraternal Order of Police filed a grievance over the termination, and an arbitration panel later ruled that the city was wrong to jettison Josey. In August 2013, he was reinstated — with back pay. And the police department was told to delete all references to his discharge from his personnel file, according to a court document.

Now to the lawsuit.

Shortly after rejoining the force, Josey, who makes about $100,000 each year, found out about a promotional opportunity to the position of captain. He applied, took the test, and was interviewed by the Promotional Review Board in 2016. According to his lawsuit, two of the three members of that board recommended him for the job, and the one who didn’t wrote in his decision that the Aida Guzman incident would “have a detrimental long-term impact on the relationship between the Department and the community we serve.”

Commissioner Richard Ross, who had by then taken command of the department, bypassed Josey for the job, citing that dissenting opinion as one of the factors, claims the suit.

Since then, Josey — with the help of the FOP — has been fighting like hell for that promotion. After Ross decided to skip over Josey, the FOP filed another grievance, and an arbitrator wound up siding with Josey, deciding that the department should promote him and give him back pay based on the would-be salary. The city fought that decision, and the whole mess has been going back and forth in legal proceedings. Just last month, a Pennsylvania appeals court upheld the city’s decision to deny Josey a promotion, and so now he’s taking his fight to federal court.

The suit, which seeks unspecified damages, accuses the city of violating Josey’s constitutional rights to due process and to embarrassing him, humiliating him, and causing him emotional distress. It’s probably also worth noting that the lawsuit states that it’s “unclear” in the video “how Ms. Guzman ended up on the ground.”

FOP president John McNesby was not immediately available for comment. The Philadelphia Police Department does not comment on pending litigation.