A longtime pageant chronicler says Tuesday’s big announcement most likely marks the end of the runway for the almost century-old institution. 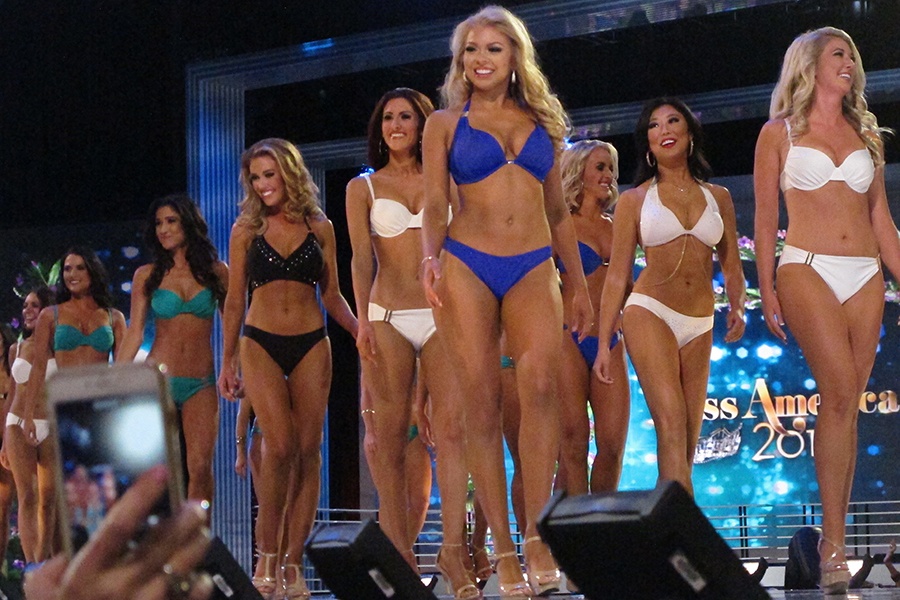 Contestants on stage during the 2016 swimsuit preliminary competition. Photo by Wayne Parry/AP

Hosting a Miss America contest without the swimsuit competition seems a bit like hosting a sack race without the sacks. I mean, the entire enterprise was founded in 1921 on the idea of parading young women in swimwear up and down the beach, even if in those days the baggy bloomers worn by the eventual winner, 16-year-old Margaret Gorman of Washington, D.C., seemed far more Queen Victoria than Victoria’s Secret.

But on Tuesday morning Gretchen Carlson, the new chairwoman of the board of Miss America (and the 1989 titleholder, though she is far more famous for being the whistleblower who brought down Fox News titan Roger Ailes), announced that a new day was dawning in Atlantic City, and it would not include bikinis. Her announcement also included the ditching of the evening gown competition (what does “personal expression” mean — wearing Lady Gaga’s meat suit?), all of which has suitably caused Miss A. diehards to flood message boards, keening for the lost pageant they loved.

On the Facebook forum MAO Fan Group (which counts some 3,000 members), several clearly devastated Miss A. vets posted eulogies beginning with “RIP Miss America.” Others called the decision “a death nail into the program” and predicted “a mass exodus” from participation at the state level. The general consensus was best summed up by one Robert Ahearne, who wrote: “Not a pageant? No consideration of physical appearance whatsoever? This may or may not be interesting. But one thing is certain: It’s not Miss America.”

No, it isn’t. As someone who has written about this quixotic American institution for the past three decades, I, too, lament the passing of an era where contestants galloped down the runway to show off years of spin class and carbohydrate abstinence, then in the evening gown portion came out dressed as chandeliers. But time marches, and all of that. Competitions change. When the Flyers won their first Stanley Cup in 1974, the players wore padding suitable for the seat of a porch rocker; nobody wore a helmet. Today every player looks like he’s wearing a loveseat.

These changes to Miss America follow a particularly foul period in the history of the pageant (and it is a pageant — I don’t care what anyone says), when it was revealed its CEO and others had exchanged venal emails about past winners. It’s worth recalling that Lenora Slaughter, the gracious Florida battleax who made Miss America into a national icon, also instituted a bunch of changes (including giving scholarship money and, ironically, stopping the practice of the winner being crowned in swimwear), and the thing thrived.

Can Gretchen Carlson, herself a bit battleax-y (at her crowning in 1988, one of the judges remarked to me in passing, “We have no idea how she won”), modernize an event in which the winner still dons a rhinestone tiara and sash? It seems unlikely. And is Miss America still Miss America if the winner is, frankly, built less like Rosie Huntingdon-Whitely and more like Rosie O’Donnell?

I’m with the Old Guard in one respect: No one wants to tune in to two hours of women in Ann Taylor suits answering questions about healthcare policy. You either embrace and own your legacy and go down with the ship, or you do a radical makeover and … well, you probably still go down with the ship.

The truth is, Miss America probably reached her shelf life a while ago. My suspicion is the ratings will be OK this September (curiosity always helps), and then Miss America will join New Coke and Johnny Depp’s Lone Ranger in the pantheon of flopped reinventions as she staggers toward her hundredth anniversary (and extinction) in 2021. In the meantime, a moment of silence, please, for the makers of Stickum and the legion of leg waxers about to hit the unemployment line. Miss America may always be pretty. Change rarely is.

Michael Callahan is a former executive editor of Philadelphia magazine and the author of the novel The Night She Won Miss America.