Saturday was a dramatic night at the Kimmel Center, where protesters interrupted a Philadelphia Orchestra performance. We called organizer Susan Abulhawa to find out why. 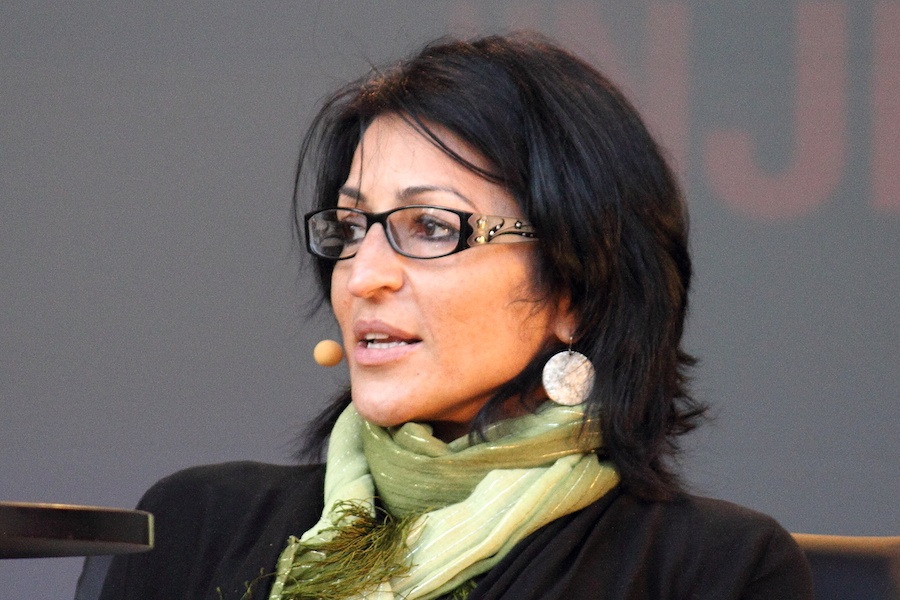 This article has been updated with a response from the Philadelphia Orchestra, which appears in its entirety at the bottom of the piece. We have removed the paragraph describing Yannick Nézet-Séguin’s alleged actions on the podium because we have been unable to independently verify the protester accounts Ms. Abulhawa referred to.

On Monday morning, the Philadelphia Orchestra sent out a “bon voyage” email to its fans and subscribers, explaining that the group is about to embark on a two-week tour that includes performances in Israel. What the email doesn’t mention is the controversy and boycott surrounding the Israel portion of that tour, or the fact that protesters blocked traffic outside of the Kimmel Center and interrupted the Philadelphia Orchestra’s performance there on Saturday night.

We caught up with Palestinian protest organizer Susan Abulhawa of Bucks County to learn more.

For our readers who weren’t at the Kimmel Center on Saturday night, can you explain what happened?
There were two protesters inside the Kimmel Center as patrons. Just before the orchestra started, one of them played a prerecorded message that was heard throughout the hall. There was initial clapping and then there was booing and heckling, but the message was able to play completely. Then they identified one of the people and he was escorted out. The second person stood up and chanted a few things and he was also escorted out.

What led up to all of this?
This is the culmination of seven weeks of sustained protests outside the Kimmel Center and of us trying to speak privately with the Philadelphia Orchestra management. The impetus for our protest stems from their planned trip to Israel. 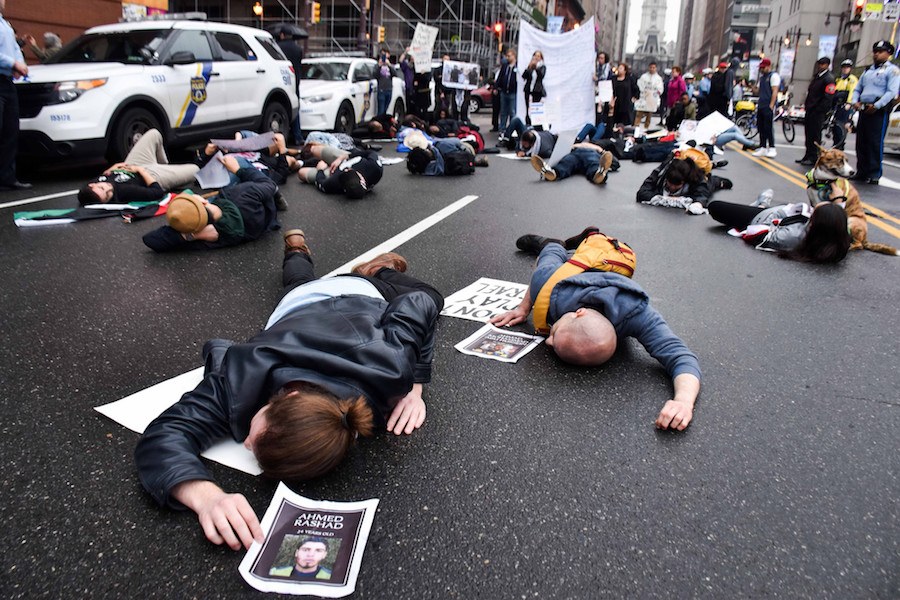 Protesters opposed to the Philadelphia Orchestra’s tour to Israel lie in the road in front of the Kimmel Center on Saturday. (Photo by Joe Piette.)

There is a 13-year-old Palestinian call for boycott, a means for mobilizing nonviolent support to basically end Israeli occupation. There are artists from around the world who have heeded that boycott.

But the Philadelphia Orchestra’s trip is especially problematic, because it is being done in collaboration with the Israeli government, which has a well-known propaganda campaign that utilizes culture to divert attention from Israeli war crimes. An Israeli official was once quoted in the New York Times saying that Israel was bringing artists to Israel and sending Israeli artists abroad in an effort to help show off Israel’s “prettier face.”

Why should the average Philadelphian care that the Philadelphia Orchestra is going to Israel?
This boycott call is modeled after the South African anti-apartheid call in the ’80s and ’90s, and it was made because Israel has been able to act with impunity, as we have seen in Gaza. It is a brutal spectacle. No other country gets to act this way.

This is all while that same Israeli military has killed over 100 people in the span of less than two months and has injured over 12,000 people who now have missing limbs and severed spinal cords and missing eyes. We feel that the Philadelphia Orchestra going to lend Philly’s music to legitimize these crimes is morally indefensible. 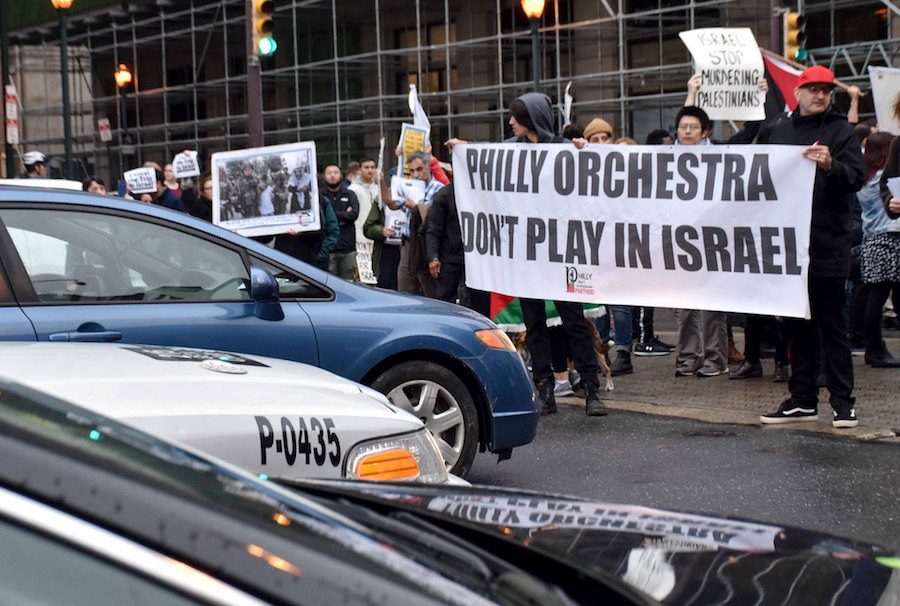 What have your communications with the orchestra been like prior to Saturday night’s action?
We started out by sending them a letter signed by over 100 musicians, artists, scholars, academics, and activists, and also by 35 social justice organizations, including Black Lives Matter and the Black and Brown Workers’ Coalition.

They responded a few days later with a short email that I found to be patronizing and dismissive and microaggressive. So we sent them another email reiterating our desire to meet with them and for them to hear us out. They weren’t interested.

They continued their dismissiveness of what is a monumental moral question and left us no choice but to take to the street. And to make sure they hear us in other ways.

The orchestra plays in a hall named after Verizon, they receive huge donations from some of the biggest corporate entities in Philadelphia, and the board is a who’s who of Philadelphia business and society. Since the orchestra has pretty much dug its heels in, do you have any plans to go after that money? To boycott the corporations that made this Israel trip possible with their financial support of the orchestra?
Everything is on the table. This isn’t over by any means.

This is one musical group taking one trip to Israel. Certainly there are big American and multinational companies with huge investments in Israel, so if you’re going to boycott the orchestra, who else should you boycott?
There are two arms to the boycott movement. One includes businesses and financial institutions. And the other is the cultural boycott, which people like Alice Walker, Lauryn Hill and Elvis Costello have supported.

We are not targeting the musicians of the Philadelphia Orchestra, to be clear. We consider them workers.

But we are concerned with what is happening in our community. In Philadelphia. It’s unfortunate that the orchestra’s management has put musicians in this position. Music and art does not exempt any of us from moral responsibility. Art should be our moral compass to justice. It shouldn’t be a way to cozy up to power and money.

Response from the Philadelphia Orchestra:

The Philadelphia Orchestra Association was shocked to read the account described by Susan Abulhawa regarding Saturday evening’s performance. Most prominently, the outrageous and insulting claim that Music Director Yannick Nézet-Séguin “put his fingers in his ears and vocalized ‘lalalalalala’” during the protest has been confirmed to be untrue by several firsthand witnesses.

In addition, the interview goes on to state several falsehoods regarding our upcoming tour to Israel. The tour is not being planned in collaboration with the Israeli government, as Ms. Abulhawa claims. Additionally, Ms. Abulhawa wrongfully states that the Orchestra will be visiting an army base. The Orchestra will not be visiting any military bases while in Israel, but rather — as part of our residency activities to bring people together through the universal language of music — musicians of the Orchestra will give masterclasses to young students and members of the Outstanding Musicians of the IDF Program. The program enables young soldiers with musical talent to continue developing their skills during army service.