Police arrested more than a dozen people after reportedly raiding an active fight over the weekend. 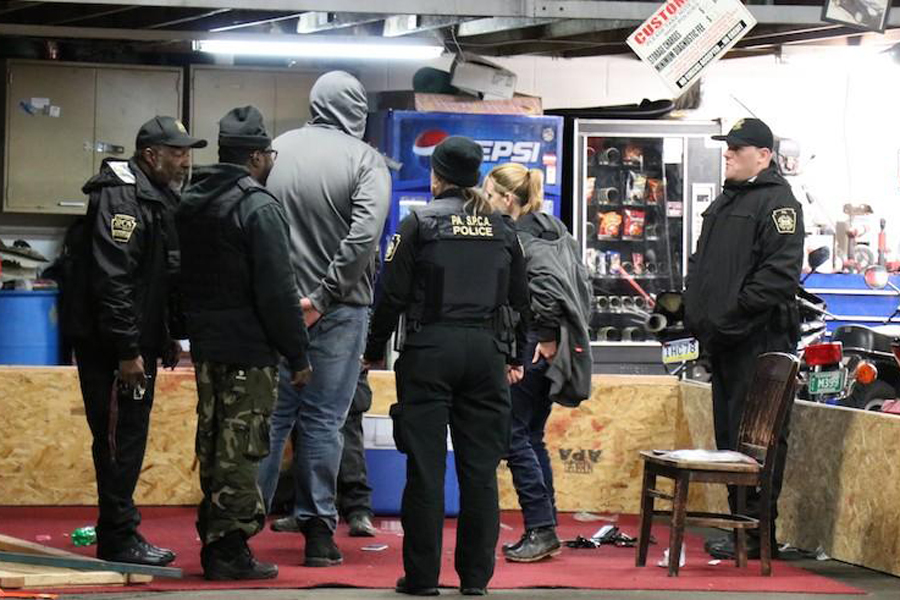 Photo courtesy of the Pennsylvania SPCA.

In late February we told you about the toppling of an alleged dogfighting ring in Chester County, a crime that Brandywine Valley SPCA officials reminded us can “happen anywhere,” despite being more closely associated with the more tucked-away parts of rural America.

This weekend, the cruelty hit closer to home as law enforcement officers with the Pennsylvania SPCA and Philadelphia Police Department arrested 14 people after raiding a dogfight in Grays Ferry.

According to the PSPCA, the organization’s Humane Law Enforcement team had been keeping tabs on a location right off busy Grays Ferry Avenue when their investigation finally made clear what was going on. After requesting police assistance for backup, PSPCA officers went into a building on the 1200 block of South 35th Street on Saturday night to stop a dogfight in progress. Once the scene was secured and a search warrant was obtained, authorities recovered drugs, two guns, a large amount of cash, and a blood-soaked wooden fighting ring from the space.

“Cases like this remind us that while we may not always hear about it, dogfighting is still happening in the city of Philadelphia,” Nicole Wilson, director of Humane Law Enforcement at the PSPCA, said in a release. “Our team has boots on the ground 365 days a year, investigating cases like this, and working to bring those involved to justice. We are grateful to the Philadelphia Police Department for their assistance in this case, and will work to prosecute these offenders to the fullest extent of the law.”

The 14 suspects taken into custody have been charged with dogfighting-related animal cruelty offenses, which are considered a felony in the state. Four pitbulls were rescued, including two that were actively engaged when police arrived. Those dogs were immediately rushed to a local veterinary shelter for treatment and are currently in stable condition in the care of the PSPCA.

The investigation into this Philly-based dogfighting operation remains ongoing. Anyone with information about this case, the whereabouts of those involved, or other cases of animal cruelty, is urged to call the Pennsylvania SPCA’s Cruelty Hotline at (866) 601-SPCA. Tips can be left anonymously.