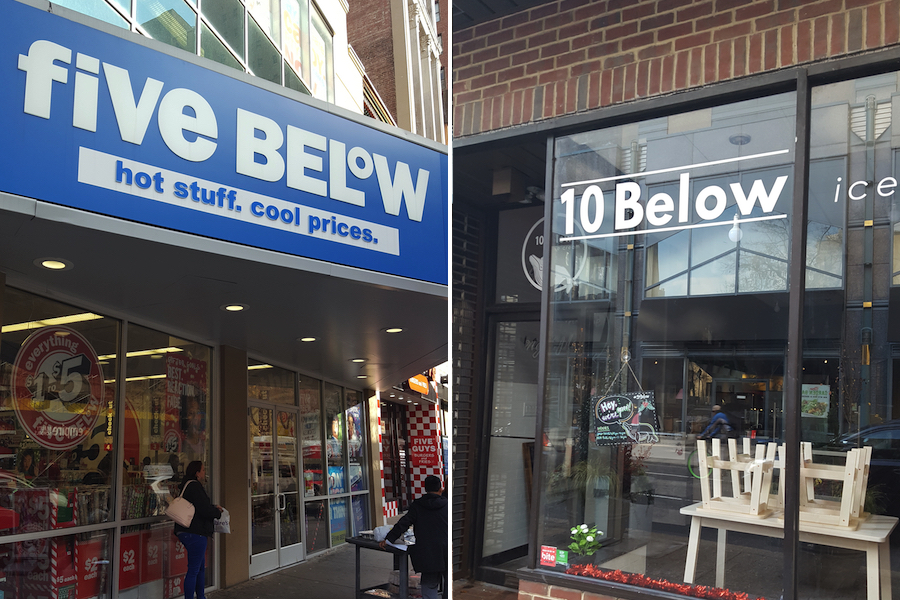 Photos of the Chestnut Street Five Below and 10 Below Ice Cream, by Helen Armstrong.

One store sells remote-controlled poop, mini-plasma balls, and Mongolian Faux Fur Blankets, all for $5 or less. The other store sells that trendy rolled ice cream.

But Five Below (currently 600 locations) says that 10 Below (five locations, only one in Philly) is violating the discount store’s trademarks, and the company has told the rolled ice cream shop to find a new name.

Five Below, the publicly traded Philly company that’s in the midst of a huge expansion, has filed a federal trademark lawsuit against New York City-based 10 Below, which opened its first Philly location near Rittenhouse Square in September.

Five Below claims that the ice cream company’s name is too similar and likely to cause confusion — meaning you might walk into the 10 Below rolled ice cream store and think that it has something to do with Five Below. Plus, argues Five Below, the company has applied for trademarks on “Ten Below” and “Five & Ten Below,” both of which would have a bigger potential conflict with the ice cream shop’s name.

Attorneys for Five Below sent a cease-and-desist order to 10 Below prior to the store’s opening on 17th Street. But 10 Below didn’t respond, according to the lawsuit, and opened right on schedule. (Neither of the Belows returned calls seeking comment on the lawsuit.)

“It seems to me that you have a very large company pounding its chest and trying to intimidate a smaller company,” says Flaster Greenberg intellectual property attorney Jordan LaVine, whose clients include Martha Stewart and The New York Times. “This is a classic example of trademark bullying. It’s an unfortunate situation for a smaller company that might not have the money to defend itself.”

As LaVine explains it, trademark disputes come down to whether a reasonable person would be likely to be confused by the two names, and in analyzing a dispute, you have to look the sight, sound, and meaning of both trademarks.

“And these are completely different in meaning,” he points out. “At Five Below, the name refers to the cost, and it’s where I go to buy ingredients for my kids to make slime. At 10 Below, the name is meant to suggest ten below zero, which has obvious relevance for ice cream.”

Indeed, 10 Below’s process involves pouring a liquid ice cream base onto plates that are -10°F or colder, as seen in the below video.

Plus, 10 Below first opened in New York City in 2015, when Five Below already had a presence there, but Five Below didn’t take them to court until more than two years later.

“They should have taken action a lot sooner than the end of 2017,” says LaVine.

Meanwhile, nobody is talking about the real crime here: A serving of hand rolled ice cream at 10 Below will set you back at least $7. Thanks, but we’ll stick with the remote-controlled poop.