Of Course Malcolm Jenkins Is a Sellout for Exploiting Kaepernick

However he tries to defend it, the Eagles player's public support of a suspicious multimillion-dollar NFL charity deal disrupted a racial justice movement that was bigger than the league itself. 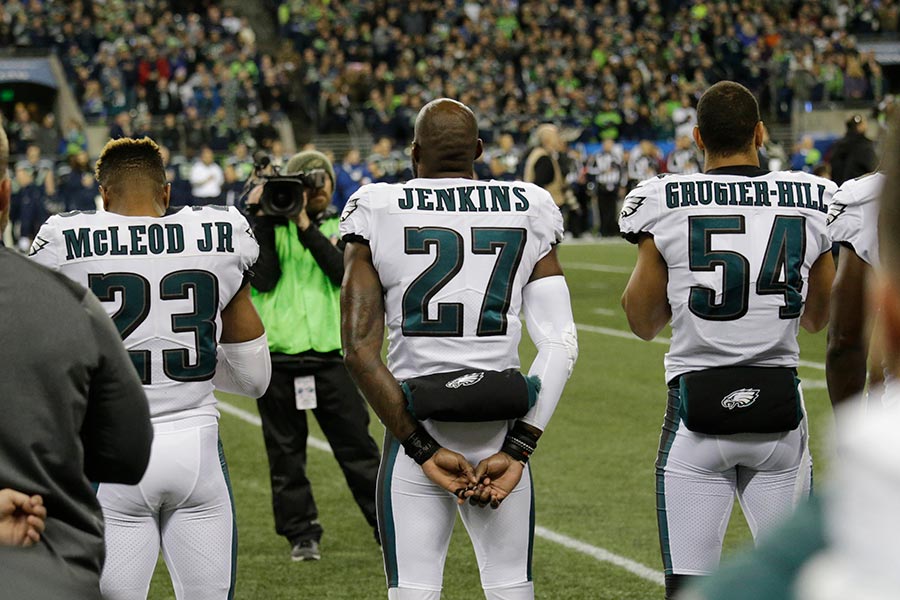 Malcolm Jenkins on the sideline during National Anthem on December 3, 2017. Photo by John Froschauer/AP

When it comes to social justice activism, money is hardly ever the answer.

Money is usually a band-aid, a diversion from combatting wrongs that require real personal sacrifice, conscious strategy, and unapologetic revolution. No cash amount is large or meaningful enough to correct an injustice that was never about money to begin with. Those who trade their power for cash are fools who clearly don’t know their worth.

Former NFL player Colin Kaepernick knows his worth. He took a knee at games to send a message loud and clear that marginalized people of color in America are being ignored, brutalized, and oppressed. He put his career on the line for his people, and helped elevate a national conversation on race that’s long been neglected in sports.

In the year since Kaepernick severed ties with the San Francisco 49ers to become a free agent only to be apparently shunned by other teams, he’s made a larger impact off the field than he ever did playing on it. But now an $89 million agreement could potentially derail the movement Kaepernick initiated within the NFL.

Last week, the Players Coalition, an activist group consisting mostly of black NFL athletes, took the multimillion-dollar charity deal the league offered them to put toward black causes over a seven-year period. The coalition, started by Eagles player Malcolm Jenkins and former NFL wide receiver Anquan Boldin, was intended to collaborate with the league to work toward solutions to the racial inequality players were protesting by taking a knee during the National Anthem. It’s been reported that one-quarter of the money will go to the United Negro College Fund; another quarter to Dream Corps, a social justice accelerator; and half to the Players Coalition for athletes to put toward individual causes.

But behind every big-dollar payout is an equally large expectation. Right now, both parties involved have yet to explicitly deny speculation that the offer is essentially a payoff for athletes to stop protesting. However, Jenkins has already begun to switch up his formerly activist tune.

He has confirmed that he will no longer raise his black power right fist during games. In an interview with SB Nation, Jenkins explained that he felt the new partnership will replace his public protests. “I think what the league is proposing is a platform and a campaign similar to what they’ve done with Breast Cancer Awareness, My Cause, My Cleats, Salute to Service, but hopefully in an even bigger manner,” he said. “And I think if the league continues to come through or deliver on their word, then I see no need to go back to what I was doing.” To make matters worse, San Francisco 49ers safety Eric Reid also claimed that Jenkins texted him the morning of the deal asking Reid if he “would be comfortable ending our demonstrations if the NFL made a donation.” Et tu, Brute?

In an open letter released Sunday, Jenkins defended the Players Coalition’s decision by stating that “what the NFL has done is a good first step — it’s not going to solve the massive problems we have in our cities and states across this country, but it’s a start.” He doesn’t mention Kaepernick in his letter, and adds “for [himself] and the Players Coalition, it was never about the money or having our voices bought. To hear people call me or anyone else a sellout is insulting.”

Sorry, Malcolm Jenkins — choosing money over the movement Kaepernick lost his career for makes you by definition a sellout.

Protesting against racial injustice was never about forcing the NFL to open up its checkbook. In fact, for a league that relies on a majority of black players to keep its operations running, such charitable efforts should be expected, not negotiated.

It’s become clear that several athletes within the Players Coalition didn’t sign up for Jenkin’s form of leadership, with several key members now exiting the group and calling it out for its recent move:

Since then, Jenkins has tried to rebrand the deal as being “about the issues”:

This initiative between the NFL, owners and Players Coalition does not mandate an end to any player demonstrations. Its always been about the issues; strengthening the criminal justice system and fight for racial and social equality. #PlayersCoalition pic.twitter.com/4Nl2pP5ltG

But I can’t see how any of this is about “the issues” when the man who first brought attention on these matters within the league has since been booted out the discussion altogether. While Jenkins once claimed that Kaepernick was invited to take part in a league-arranged meeting with the Players Coalition to discuss the protests and how to address them in October, the former NFL player’s representatives say that wasn’t true. Other players have also alleged that Jenkins kicked Kaepernick out of the Players Coalition at the start of the season. Jenkins has neither confirmed nor denied the allegations and has made it a point to be the emerging face of the movement within the NFL since Kaepernick’s apparent blackballing.

The problem with Jenkins’s leadership is that he’s allowing the influence of black athletes to be compromised by old-school oppressive tactics of buying out social justice movements in exchange for silence. A monetary donation from the NFL shouldn’t stifle the momentum that’s already gotten these athletes this far — instead it should reignite it. Rather than dialing back the activism, Jenkins should be encouraging it openly and freely while remaining in solidarity with Kaepernick. In other words, the revolution shouldn’t be monetized, but energized.

Seemingly this level of integrity would cost Jenkins more than what he’s willing to personally give up — a price that Kaepernick nobly paid.