Here’s what we learned when Clinton’s book tour stopped in Philly. 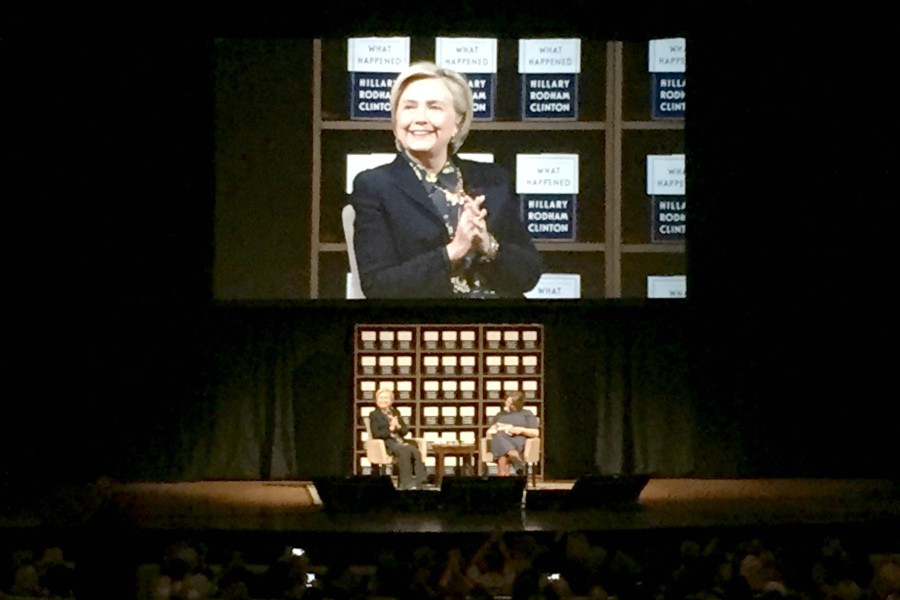 The lack of music was music to my ears.

When Hillary Clinton strode onto the Academy of Music’s grand stage on Thursday evening, there was no Katy Perry. No “Fight Song.” There was only Clinton – and roars of approval from the audience.

Like the rest of the country, I’d watched plenty of her speeches and heard the catchy tunes chirp in the background. They swarmed in my head for longer than desired and stuck around when I was left feeling disappointed by the speeches themselves.

The silence on Thursday was different. So was Clinton. Here was a woman who had significantly less to lose, who appeared a little more off the cuff than she had in the past. And yes, that was the aim of her memoir, What Happened, and its subsequent tour: to offer a “personal, raw, detailed” glimpse of Clinton, per a press release for the event.

A man barraged the audience with shouts about Pizzagate, and Clinton played it cool:

Clinton is actually funny.
No, really. I swear. Her humor wasn’t scripted – not all of it, at least. She fielded playful questions from Philly’s own Jennifer Weiner with a surprising dose of wit. The crowd laughed often, at jokes about her husband Bill’s horrendous cooking and odd tendency to put cinnamon in eggs, and about Russia using Pinterest to sway the election. (Clinton: “I still can’t figure that one out.”) At one point, Weiner asked, “It’s the end of the event. Do you most enjoy taking off your makeup or your Spandex?” Clinton answered: “As much as I possibly can.”

Regardless of whether or Clinton is funny – or tough, or composed – people will still dislike her. Very much.
Both Clinton and Trump were deemed “historically disliked” characters during the 2016 presidential campaign, according to FiveThirtyEight. Let’s think about that. What has this woman done to receive almost the same amount of distaste and distrust as Donald Trump, the man who said he grabbed women “by the pussy” and asked African Americans, “What do you have to lose?”

New York Times columnist David Brooks wrote a great piece on people’s hatred for Clinton last year. Brooks wrote of a particularly telling campaign video in which Clinton looks “less like a human being and more like an avatar from some corporate brand.” He argues that her experience in office – her tendency to fill her life with her politics and her resulting appearance as a workaholic – ultimately hurt her.

“This formal, career-oriented persona puts her in direct contrast with the mores of the social media age, which is intimate, personalist, revealing, trusting and vulnerable,” Brooks writes. “Most Americans feel more vivid and alive outside the work experience than within. So of course to many she seems Machiavellian, crafty, power-oriented, untrustworthy.”

Clinton doesn’t really know what happened to cost her the election. But it probably had a lot to do with sexism.
Sexism was the major topic on Thursday night. My favorite quote from the night: “The only way to get sexism out of politics is to get more women in office.”

Many women, including myself, are fascinated by Clinton.
Before the book signing on Thursday, I wasn’t fully aware of how much I wanted to get inside Clinton’s head. The first time I saw Clinton in Philly, she made history at the DNC. She spoke about being a woman in politics, about breaking the “highest, hardest glass ceiling,” but somehow, her remarks about being a woman in politics – and sexism in general – weren’t as compelling as they were on Thursday.

Maybe it was because the landscape had changed. On Thursday, Clinton called out former NBC host Matt Lauer for “mistreating” her during an interview, which she also mentions in the book. This week, Lauer became the latest subject of a long string of recent sexual harassment allegations.