Kindy’s: The Tinsel Capital of America 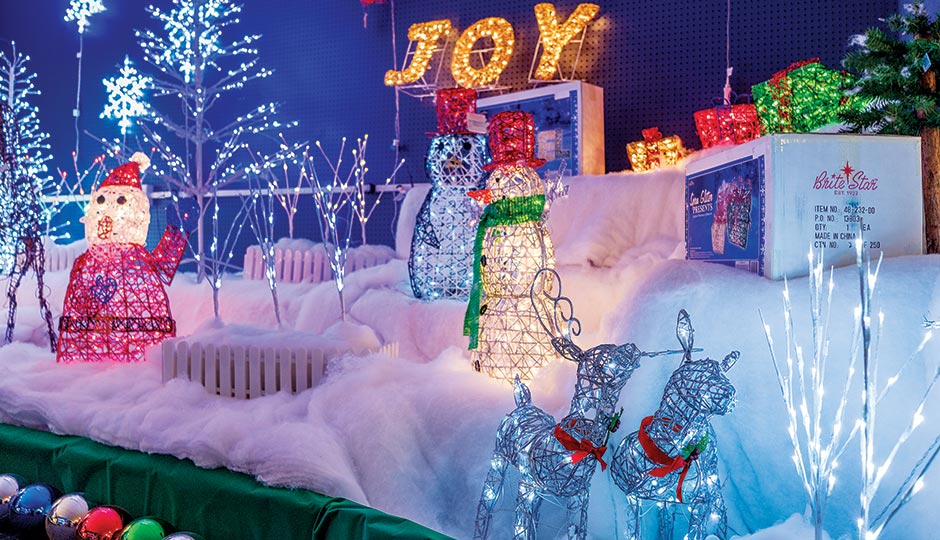 When it comes to trimming the Christmas tree, I can be a real stickler. In most other areas of my life, my friends and family will attest, I’m pretty laid-back. “To each his own” is my motto 11 months out of the year. But every December, I snap into a trance-like state of Yuletide perfectionism the likes of which only Santa himself could relate to. I can’t even blame this seasonal character shift on eggnog. I never touch the stuff.

If the lights aren’t big, bright and multicolored — God help my family. If the Trinacria clan’s Douglas fir isn’t drowning in silver tinsel, it might as well be naked. Here in Philadelphia, a reverence for tradition is deeply ingrained in the culture. And with winter a time of peak nostalgia, if Christmas doesn’t look a certain way for folks like me, warm and fuzzy feelings can swiftly devolve into a string of bah humbugs.

Luckily, deep in South Philly there’s an unassuming one-stop shop dedicated to the classic Christmas aesthetic I and so many others swear by. Passing through the heavy vinyl strip curtain at the threshold of the unassuming Kindy’s Factory Outlet where 20th, Moyamensing and Penrose converge is like a baptism, guaranteed to cure even the Scroogiest cases of the holiday blues. Bubble lights, garlands and other old-school holiday decor never went out of style here. But Kindy’s isn’t for the faint of heart: Think Christmas Village meets Thunderdome. The driven, die-hard clientele is bound to provoke a new appreciation for your own dysfunctional family — a Christmas miracle!

To enter this winter wonderland, guests must first sidestep any unaccompanied children wandering the warehouse floor as their parents argue over which wire-framed sculpture would look best on the front stoop. The aisles are always in a state of chaos, to the point where shopping for any specific item becomes part scavenger hunt, part kismet. Kindy’s even lets you test out your lights before purchase (but definitely not their artificial snow spray — I learned this the hard way as a youth). A stone’s throw from I-76, this place can only be described as “so Philly it hurts.”

Warts and all, Kindy’s is just staying true to its roots. The outlet was established in 1981 at the behest of neighbors clamoring for a more streamlined avenue to the good stuff. Kindy’s is the singular retail arm of Brite Star LLC — a local manufacturer that has made Christmas its business since 1932. There’s a rumor floating around the Internet that Brite Star invented tinsel way back when. It’s fake news, the stuff of urban legend, and if you ask Kindy’s namesake Kinderman family about it, they happily give credit where it’s due. But they don’t go out of their way to silence the whispers. Why should they? Brite Star may not have conceived of the festive tree adornment — credit there goes to the Germans, circa, like, 1610 — but the company more or less owns the product now. Judy Kinderman — whose son, Richard, represents the fourth generation of Kinderman family ownership — says Brite Star holds roughly 80 percent of the U.S. tinsel market. Eighty percent!

Three million packages of silvery icicles (a.k.a. tinsel strands) are made annually at Brite Star’s compound on South 20th Street, and while carriers across the world stock the company’s hallmark item, there’s only one place I’ll buy the stuff. Sure, a trip to Kindy’s is a bit like a visit with your crazy drunk uncle, but I agree with Clark Griswold’s assessment of the holidays in Christmas Vacation: “The most enduring traditions of the season are best enjoyed in the warm embrace of kith and kin.”

Published as “Tinsel Capital of America” in the December 2017 issue of Philadelphia magazine.