The Curious Case of Rittenhouse’s “No Gay Cruising” Sign

Decades ago, men used to cruise the 2000 blocks of Delancey, Pine and Spruce streets, looking for other men. The traffic sign with which the city tried to stop them is still there. 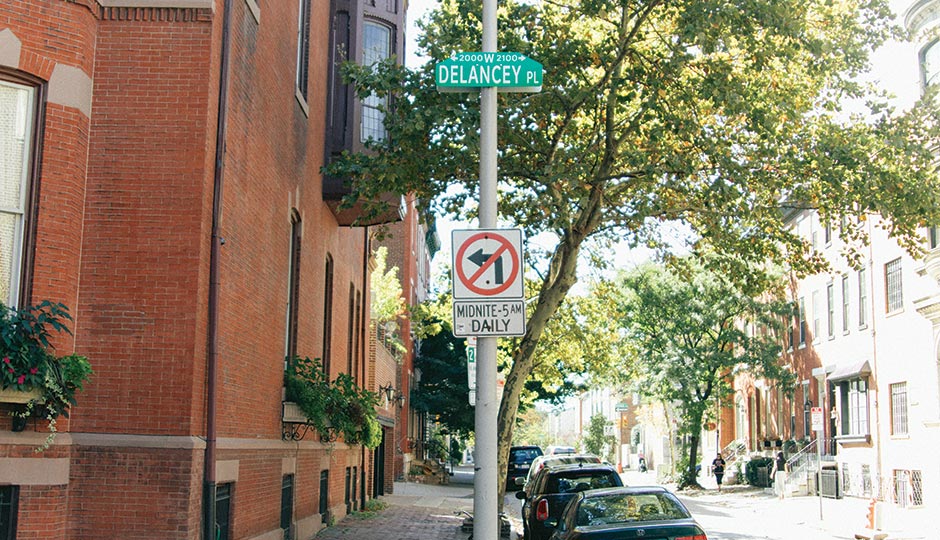 In the ’80s, in my first apartment at 20th and Spruce, I remember lying awake as the same bad muffler circled the block all night. It was the sound of desire.

I grew up in Rittenhouse in the 1970s, so I knew that nighttime was prime time for a longstanding ritual there. Men cruised the 2000 blocks of Delancey, Pine and Spruce streets. They were looking for other men. On this circuit, known colloquially as the “Merry-Go-Round,” some men perched on stoops, while others walked or drove. When a guy passed a man he liked, he paused and turned. If the man looked back, it was game on.

At a time when homosexuality was taboo and, yes, illegal, the Merry-Go-Round was noncommittal. As Bob Skiba — archivist at the William Way LGBT Community Center — puts it, during that era, walking into a gay bar was tantamount to coming out. Those bars were regularly raided, and people were picked up off the street and hauled in on sodomy charges. But on the Merry-Go-Round, you could just be out walking. You cruised with your eyes. It was a place to test the waters — or for a married man with secret desires.

And that’s why the sign went up. Our friend with the spluttering muffler was technically breaking the law, thanks to the sign that still stands at the corner of 21st and Delancey. Erected in 1974, it bans left turns — not during weekday rush hours, but from MIDNITE-5AM DAILY. A blurb in the June 1974 Inquirer explains this ghost of the Rizzo era: “The streets involved are an integral part of the late-night and early-morning gay cruising circuit. … [R]esidents cared little for the heavy traffic and even less for the drivers. The sign is a result of a petition by homeowners and it will probably reduce the traffic. But that’s all.”

“It’s kind of stretching it,” then-deputy streets commissioner John Scruggs told the Inquirer, “to think you can regulate human behavior with a traffic sign.”

Common Pleas Court judge Ramy Djerassi grew up, like me, on the 2000 block of Delancey. He recalls things differently. “This is a very liberal community,” he insists. “No one was telling gay people not to cruise.” The real problem was traffic: “People just wanted to sleep at night. The cruising was an imposition.”

The sign was affixed two years after Philly’s first gay pride marchers assembled in Rittenhouse Square. It didn’t work. A decade passed, then two decades, and still the Merry-Go-Round spun.

Now, more than four decades later, no one pays the sign much attention — not even the people responsible for it. According to Richard Montanez, Philly’s current deputy commissioner for transportation at the Streets Department, “Our records only go back six years plus the current year. I cannot tell you why the sign is there.”

Not that the neighbors are losing sleep over cruising these days. “The new generation wouldn’t even think of meeting people outside,” says Christopher Bartlett, executive director of William Way. Because of technology, such IRL serendipity is gone.

Fear of AIDS slowed the Merry-Go-Round. Grindr and Tinder stopped it altogether. And the sign at the corner of 21st and Delancey remains as a vestige of community-sanctioned, institutionalized homophobia. Montanez says he’ll look into removing the sign now that he knows its history. At this point, maybe we should keep it around as a reminder: We’re never quite as enlightened as we think we are.

Published as “Turn for the Worse” in the November 2017 issue of Philadelphia magazine.