Rodney Muhammad, president of the NAACP’s Philadelphia chapter, has repeatedly denied that his paid pro–soda tax “community outreach” work in 2016 was related in any way to his leadership position. 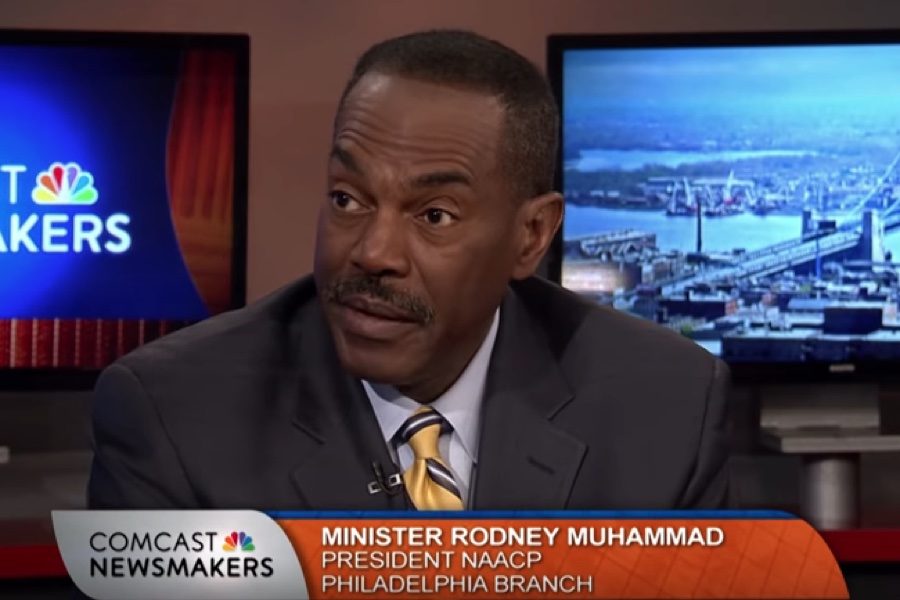 Rodney Muhammad on Comcast Newsmakers discussing the passage of the soda tax in June 2016. (via YouTube screenshot)

Since news emerged in early October that Rodney Muhammad, president of the Philadelphia chapter of the NAACP, had been hired to do “community outreach” by a communications firm working for a PAC that was lobbying for the passage of Mayor Jim Kenney’s soda tax proposal in spring 2016, Muhammad has repeatedly denied that his paid advocacy work was in any way connected with his NAACP leadership position.

However, Philadelphia magazine has uncovered several contemporaneous documents and a video clip showing that Muhammad was routinely identified by his NAACP title while speaking in favor of the soda tax, both before and after the legislation passed on June 16, 2016. During that May and June, Muhammad was working for Bellevue Communications on behalf of its client Philadelphians for a Fair Future.

In a March 4, 2016, press release from the Mayor’s Office that included statements from a “broad coalition including small business owners, faith leaders, labor unions, educators, environmentalists, economists, activists and neighborhood leaders from all across Philadelphia,” Muhammad was labeled as “Philadelphia NAACP president” and described the soda tax as “painless.”

A pro–soda tax flyer, headlined “Why we should urge City Council to vote YES on the sugary beverage tax” and released in April 2016 by Public Citizens for Children and Youth, listed “Minster Rodney Muhammad, President of the Philadelphia NAACP” among its endorsers.

On May 19th, 2016, following testimony in favor of the soda tax that he had given at a City Council hearing, Muhammad was identified as “President of the Philadelphia Chapter of the NAACP and a member of Philadelphians for a Fair Future” in a PFF press release sent out by Bellevue. In the release, headlined “Statement From Minister Rodney Muhammad on the Proposed Container Tax,” Muhammad criticized a competing tax proposal from the soda industry, remarking “So I say to all members of City Council: Don’t let the big soda companies off the hook. Stop worrying about their concerns, and focus instead on the people in the communities we all serve.”

And in late June, a week after the soda tax passed, Muhammad went on Comcast Newsmakers to discuss the victory. During an interview with host Jill Horner, Muhammad was introduced and identified onscreen as “president of the NAACP, Philadelphia branch”; the organization’s website address was also shown. In reference to the overwhelming support for the tax, Muhammad said: “I think that’s why the mayor was able to build such a large coalition in the Philadelphia future with so many of us on board: the Federation of Teachers, many of the unions were on board, just the host of stakeholders that wanted to see this pass.”

Muhammad, who was criticized earlier this week by the Philadelphia Tribune over his soda tax work and recent disclosure that he is acting as a paid consultant for Mayor Kenney’s reelection efforts, did not respond to Philadelphia’s request for comment.