Take comfort, Philly fans, even the lousiest of teams can turn in an instant classic. 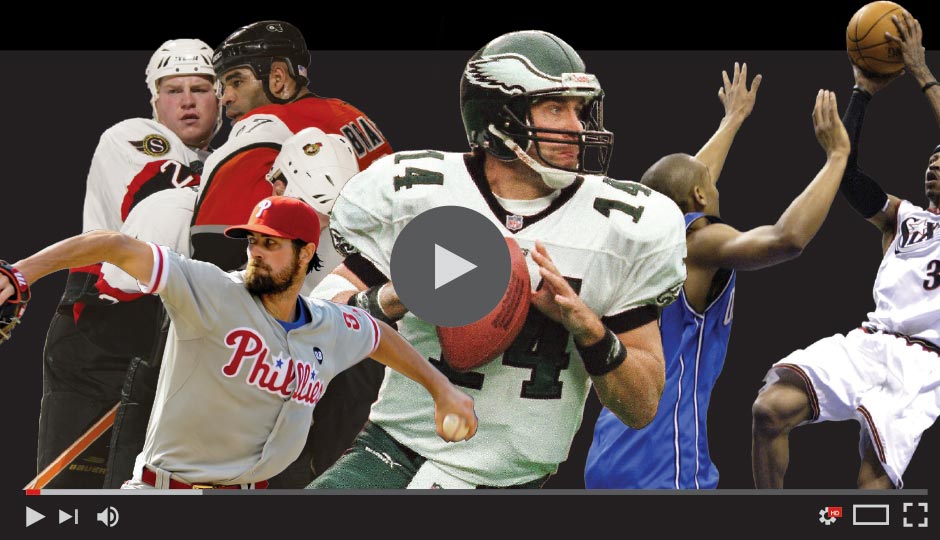 We get it: It’s tough to get stoked about Philly sports right now. (Sorry, Sixers; “potential” isn’t technically exciting.) But remember, even a so-so squad can produce a contest for the ages. Here, four Philly games that meant little in the standings but were electric in their time. Plus, you can watch them all on YouTube, anytime you want.

Taking a red-eye flight back to Philly after playing in Toronto the night before is no problem for Allen Iverson, who scores a career-high 60 points against Orlando at the then-Wachovia Center on February 12th. Forgotten 76ers coach (and Roman Catholic High alum) Jim O’Brien called it the greatest performance he’s ever witnessed. Guess he never saw the Answer on a heater in A.C. …

On July 25th, Cole Hamels strikes out 13 Cubs and tosses a no-hitter at Wrigley Field in his final start as a Phillie (though we’re holding out hope for a late-career return) — he’ll be traded to the Rangers for a boatload of prospects six days later. Carlos Ruiz ties a Major League record by catching his fourth no-no. The final out — center fielder Odubel Herrera’s improbable catch after tumbling on the warning track — is the play of the game.

In the 42 years since our Broad Street Bullies last raised the Stanley Cup, the Flyers have maintained their identity as an aggressive team inclined to throw fists. There have been plenty of memorable scraps over the decades, none more revered by bloodthirsty fans than the line brawl against the Ottawa Senators on March 5th. Heavyweights Donald Brashear and Rob Ray kick off the melee with less than two minutes left in the third period.

So much going on with this one: Andy Reid earns his first win as head coach in a gritty Week 5 clash with Dallas. Cowboys receiver Michael Irvin suffers a career-ending neck injury in the first quarter — and yeah, we fans cheer as he lies motionless on the Vet’s cold, hard turf. And as future head coach Doug Pederson has another predictably middling day under center, Donovan McNabb waits in the wings.

Published as “Lousy Teams, Great Games” in the October 2017 issue of Philadelphia magazine.