Republican legislator Aaron Bernstine said the difference between him and “snowflakes” is that he won’t let “thugs” stop him or his family on the highway. 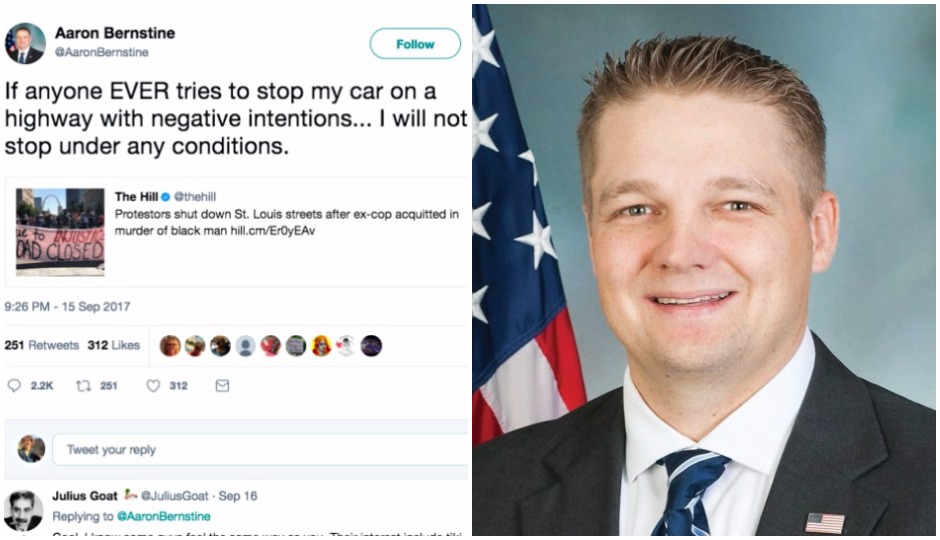 If you’d never heard of him, now you have: he’s the Republican state legislator who said in a tweet this past weekend that he would run over protesters who stood in the way of his car.

If anyone EVER tries to stop my car on a highway with negative intentions… I will not stop under any conditions. https://t.co/Uf62WwhIUk

Bernstine, who serves the 10th District in western Pennsylvania, retweeted a photo of protesters blocking streets in St. Louis on Friday after a white former police officer was acquitted of murder charges in the controversial shooting of a black man.

“If anyone EVER tries to stop my car on a highway with negative intentions… I will not stop under any conditions,” Bernstine said in his retweet.

His statement drew plenty of backlash this weekend.

Cool, I know some guys feel the same way as you. Their interest include tiki torches, Nazi slogans, and not stopping their cars.

Define "negative intentions"? Do you mean you condone the death of Heather Heyer when a car ran her over in Charlottesville? That's ok to u?

.@AaronBernstine …save this 4 ur allocution when it forces u 2 plead guilty on murder 2 charges to avoid this tweet's proof of murder 1.

In subsequent tweets, Berstine defended his statement against those who claim he’s advocating for the same tactics used by ISIS and the man who struck and killed 32-year-old Heather Heyer while she was protesting against neo-Nazis and white supremacists during the rally in Charlottesville, Va. last month.

The legislator denied those comparisons, but continued to receive criticism for calling protesters “thugs” and activists “snowflakes” in follow-up tweets.

Difference between me and these snowflakes is that I won't be assaulted in name of "free speech" https://t.co/vKQCOz8h74

Ahhh, your racism is showing when you equate protestors with the loud as shit dog whistle 'thugs'

Bernstine did not immediately respond to a request for comment on Monday morning or for an explanation as to what he meant by “negative intentions” and “thugs.”

A spokesperson for the Pa. GOP did not immediately respond to a request for comment either. According to PennLive, Bernstine sent the following email to the entire House of Representatives on Saturday afternoon:

“Fellow members, I know some of you have been informed about a tweet I posted last evening that said ‘If anyone ever tries to stop my car on a highway with negative intentions… I will not stop under any conditions’. Since I posted this, it has been picked up by several state and national publications and my words have been misconstrued in their headlines.

Taking my comments to that extreme is just absurd. My intent was simply to let people know that I, along with what I believe are many others, have grown tired of those who are committing crimes and acts of violence in the name of peaceful protest.

Just last evening, we saw “protesters” who moved from blocking streets to destroying buildings and using projectile weapons against law enforcement. I am confident that none of us find this acceptable.

As we all have come across times where our words were completely changed to fit a false narrative, I wanted you to be aware of what transpired if you were contacted by one of your constituents. If you have any additional questions, don’t hesitate to contact me directly.”