It took six years to bring the Chestnut Street project to fruition – and now that it’s open, Councilwoman Jannie Blackwell isn't so sure about it. A city rep, though, says the lane is here to stay. 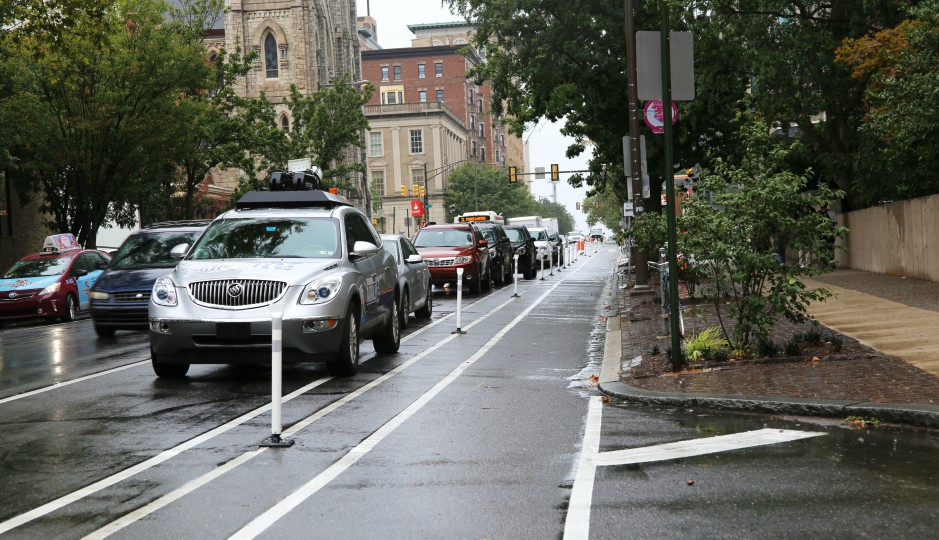 Photo via the City of Philadelphia

The 1.1 mile lane on Chestnut Street between 45th and 34th Streets, equipped with striping, signage and flexible delineator posts (think: quasi-plungers that separate bikers from cars) opened on Tuesday – to mostly cheers (and some inevitable groans).

Here’s the thing: It took about $50,000, six years of bickering, and three weeks of construction for the Bicycle Coalition and the city to bring this project to fruition. And now that it’s finally open, City Councilwoman Jannie Blackwell, who’s been instrumental in the process, said she’s not so sure about it.

According to NewsWorks, Blackwell said during the lane’s opening dedication event that she wants the lane to operate on “trial basis for three months.”

The Councilwoman said she’s received pushback from some neighbors who aren’t used to the new lane – and she told NewsWorks that she plans to wait 90 days before deciding whether or not she’ll try to take it away.

Woah, a safe way to bike to work? Thanks, @CouncilwomanJLB @bcgp! pic.twitter.com/3QYCtceMIO

Needless to say, some bikers aren’t happy with Blackwell, the same Councilwoman who introduced a bill in February that would require residents to go through L&I and their district Council person in order to place so much as a potted plant, bench, or other piece of furniture on the sidewalk outside their houses. (The Councilwoman withdrew the bill after a petition circulated.)

Randy LoBasso, communications manager for the Bicycle Coalition, said the organization was surprised by the Blackwell’s statement and is asking bikers to call and email her to advocate for the project.

“The city, the Bicycle Coalition, neighborhood organizations, the University City District – all these groups spent many years talking to the neighbors trying to come to an agreement,” LoBasso said. “And we all did. We all signed off on it.” 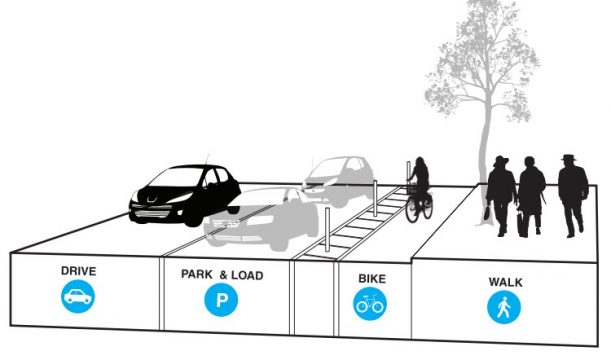 Image via the City of Philadelphia

The lane’s not perfect: cyclists traveling past 34th Street have to cross at the intersection, where the protected lane ends and an unprotected bike lane starts on the right side of the street. And according to West Philly Local, there have been reports of traffic issues near Chestnut and 45th Street, where the road changes from three lanes to two lanes.

But still, it’s a start. It certainly makes biking along the busy stretch of Chestnut (where crash rates are three times the city average per mile) a lot safer for the many cyclists – and drivers – who use the street.

Mike Carroll, a deputy managing director overseeing the project, said the bike lane is here to stay. He said Blackwell is having a “change of heart as people are getting used to the way it looks.” (Blackwell did not respond to a request for comment.)

“We told her we’re more than happy to take any complaints she has and get directly back with people,” Carroll said.