A former employee at Function Coffee Labs claims they were forced to continue interacting with a "transphobic" patron. 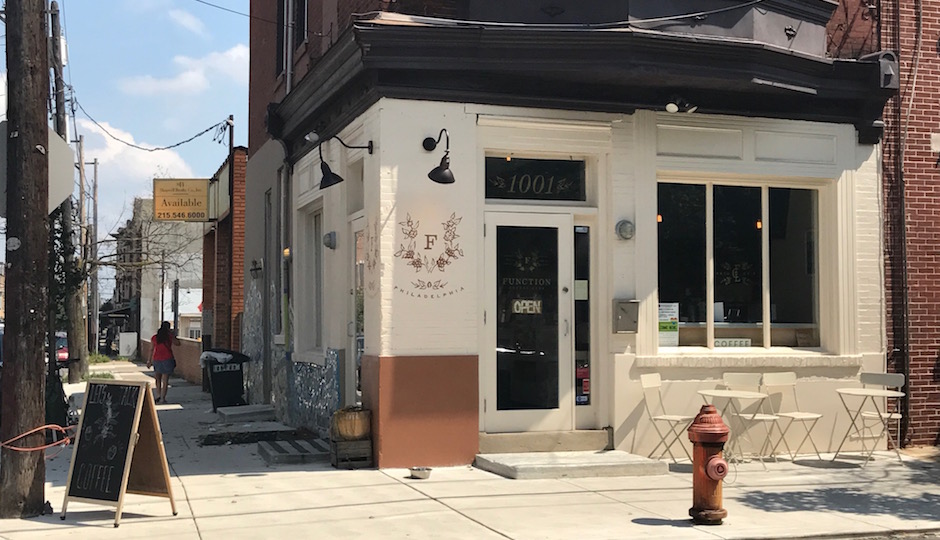 A former employee at South Philly’s Function Coffee Labs says they were terminated after making complaints about harassment on the job from a “transphobic” customer who frequented the shop.

The former employee, who identifies as transgender and prefers they/them pronouns, spoke with Philly Mag exclusively about their experience and requested anonymity because “it is often difficult for transgender people to find employment.”

The ex-worker, who is also a person of color and in their late 20s, said they were employed at year-old Function Coffee Labs at 1001 South 10th Street for eight months. During that time, they said, they received two promotions and were given “quality-control and employee-training responsibilities.” Then “something changed” this summer.

“I was fired in response to being harassed and physically threatened by a regular customer,” they said. “The harassment had been taking place since April.”

The co-owners of Function Coffee Labs, Ross and Meghan Nickerson, told Philadelphia magazine that, for legal reasons, they could not discuss details about the employee’s firing. In a statement, they said “we pride ourselves on being a welcoming and friendly coffee shop” and “do not tolerate any behavior that is intolerant, bigoted or discriminatory.” However, in a Facebook post that has been edited since it was first published on August 17th, the company did reveal some details about the incident. (See screenshots of the original post here and here.)

According to the former employee, they first told the owners about the customer in question in an email on July 12th. In a subsequent in-person meeting with the owners, the ex-worker said they recounted the customer’s derogatory comments, including one he made about their ability to count money. They also said that the customer frequently misgendered them as “a girl,” and that this made them feel uncomfortable, as “it is not an identity I respond to.”

“I told [the owners] that this customer, along with others, frequently made me feel unsafe and violated as a trans-identified person,” they said. “However, because this customer was a ‘regular,’ I was forced to continue interacting with him. I relied on my coworkers to serve him whenever possible.” (In the original version of Function Coffee’s August 17th Facebook post, the Nickersons wrote that after they learned about the issues with the customer, “[W]e confirmed receipt of the [employee’s July 12th] email and asked our employee if they wanted to have a larger discussion regarding the matter. Our offer was denied.”)

Tensions continued throughout the summer. The former employee said that, in another meeting with the owners on July 27th, they were told that the customer had accused them of making “gay slurs at him and his friends, and that I was homophobic. … I had never made gay slurs or any disrespectful comments to him at all, and I never saw him enter with any friends. However, Ross and Meghan asked me to apologize to him in order to ‘smooth things over,’ even though we all agreed that I had never made such slurs.” (In the original Facebook post, the owners said they “did not ask our employee to apologize to this customer, but rather asked if they would like us to talk to the customer on their behalf. Again, our offer was denied.”)

On August 6th, the former employee said, the customer entered the store and approached them while they were working behind the counter. “He leaned over the counter, put his face inches from my face, and shouted at me, ‘Good morning, sunshine,’” they said. “I redirected the conversation outside the store and, as requested, apologized for making him feel disrespected and hurt. He proceeded to verbally harass me, including statements about my age and how ‘young girls should behave.’ His volume and physical proximity to me escalated to a point where I felt physically threatened and unsafe, and needed to end the conversation.”

According to emails the former employee provided to Philly Mag, they told the Nickersons, who were out of the country at the time, about this incident right after it happened and said that they “did not feel safe.” Meghan Nickerson responded to these emails three days later, on August 9th, stating that they were “concerned” with how the former employee interacted with customers and that they would discuss things further when they returned.

In response, the former employee told the owners that they felt “unsafe and unsupported,” and that they would call the police should this customer return and harass them again. “I told them that I felt like they were making me out to be a problem employee,” the worker said. “I highlighted the ‘harassment and discrimination’ section of the employee handbook, and left it out for them to see when they returned. I fulfilled all my work shifts through August 10th, even though I did not feel safe in that space.” (In the original Facebook post, the owners said that “As we were out of the country for our wedding, we replied on August 10th asking [the employee] to file a report with the police and stating that we would ask the customer not to return.”)

On the evening of August 10th, the former employee received an email from the Nickersons informing them that they were fired “effective immediately.” The reason, the owners said, was that the worker defaced the handbook and created a “hostile space.” The former employee said that they only “highlighted the section in the handbook on harassment in the workplace” and removed the page from the binder and left it out for them to see it as a way to “remind the owners that they weren’t following their own polices.” However, three days later, the ex-worker received another email telling them they were fired for not performing the job duty of “being friendly to customers.”

We pride ourselves on being a welcoming and friendly coffee shop to employees and customers throughout the community. We work to make our shop stand out for its dedication to high quality customer service every single day. That extends beyond our products; we do not tolerate any behavior that is intolerant, bigoted or discriminatory.

In order to protect employee rights, we cannot disclose specifics about the incident in question. We can confirm that neither gender identity, nor this particular incident, was the reason behind our actions.

We want to turn this situation into a positive one and find a way to learn and grow from it. Furthermore, as a neighborhood shop that provides a safe and inclusive space for the community to congregate, we acknowledge our responsibility to make that space an inviting haven for everyone that walks through our doors.

The ex-worker said they would like to advocate for other marginalized people so that they “should never go to work feeling scared and unsafe.”

“I would like to make it clear that I have never accused Function Coffee Labs of firing me because I am transgender, nor am I trying to do that now,” they said. “However, this is a challenge to employers who foster an environment that is not safe for people of marginalized experience, in order to appease target customers — even those who have historically been disrespectful to one or more of your employees.”