Penn State: Richard Spencer Is Not Welcome to Speak Here

President Eric Barron said freedom of speech "does not require our university to risk imminent violence." 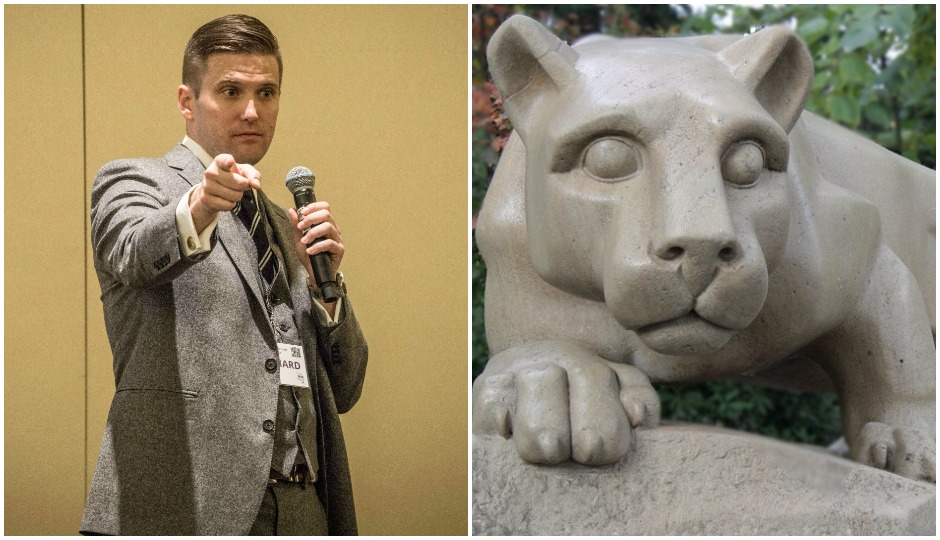 Pennsylvania State University will not allow Richard Spencer to speak on its campus.

In a statement released on Tuesday, the university said Spencer’s presence would present “a major security risk to students, faculty, staff and visitors to campus.”

Spencer, who presides over the Virginia-based white nationalist National Policy Institute, requested to speak at the university this fall.

Penn State president Eric Barron said that while the university “fully supports the right of free speech … the First Amendment does not require our University to risk imminent violence.”

Spencer, who popularized the term “alt-right” (which the Anti-Defamation League maintains is a rebranding of white supremacy), has gained widespread notoriety since the election of President Donald Trump, whom he praises. He’s quoted from Nazi propaganda, denounced Jews and called for a “peaceful ethnic cleansing” of people in the U.S. who are not of European descent.

“In light of the recent violence and tragedy in Charlottesville, Penn State has evaluated a request for Richard Spencer, who is president of the National Policy Institute, to speak on the University Park campus this fall.

I disagree profoundly with the content that has been presented publicly about this speaker’s views which are abhorrent and contradictory to our University’s values. There is no place for hatred, bigotry or racism in our society and on our campuses.

As stated last week, Penn State is an institution of higher education, and fully supports the right of free speech and encourages its expression in thoughtful and respectful ways, even when we strongly disagree with the opinions expressed. But the First Amendment does not require our University to risk imminent violence.

After critical assessment by campus police, in consultation with state and federal law enforcement officials, we have determined that Mr. Spencer is not welcome on our campus, as this event at this time presents a major security risk to students, faculty, staff and visitors to campus. It is the likelihood of disruption and violence, not the content, however odious, that drives our decision.

As we enter the new semester with a national climate of great uncertainty, Penn State continues to foster an inclusive climate for all races, ethnicities, religions, sexual orientations, genders and other differences. Our University strives to create an environment where everyone can teach, learn and live in an atmosphere of safety and mutual respect.”