A review of the strange, sad show at the Borgata in Atlantic City. 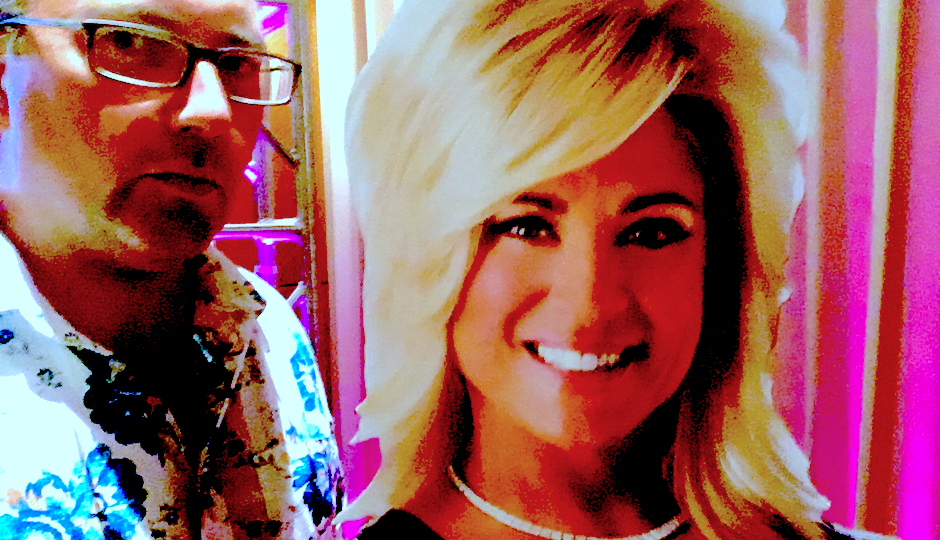 Does she know I’m standing behind her, I wonder?

“Can I talk about the baby that died at birth?”

Of all of the shows that have taken place inside the Borgata’s Event Center over the last decade-plus, I’m pretty sure no performer has ever uttered those words. But last Friday’s performance was not your average show, by any measure. No, this was Theresa Caputo Live: The Experience.

With tickets priced from $65 to $125, more than 2,000 people turned out to see the woman known as the Long Island Medium, whose TV show on TLC finished its ninth season earlier this year.

This was live and in-person.

I wound up at Caputo’s Borgata show on a lark. I’ve never seen her on TV. I’m not the kind of person who goes to psychics or mediums. I had absolutely zero interest in hearing from any dead people.

But that’s exactly why the woman sitting next to me was at the Borgata, why she paid top dollar for a single ticket close to the stage, why she drove from her home in South Philadelphia to be at the show.

The 70-something widow, who didn’t want me to use her name, had recently lost her husband of more than 40 years to cancer.

“When he died, it’s like he took all of my bodily organs with me,” she told me just before the show started, both of our eyes welling up. “I don’t know what to think about her. I’m basically an atheist. But if she brings him through for me, I guess I will have to question my beliefs.” 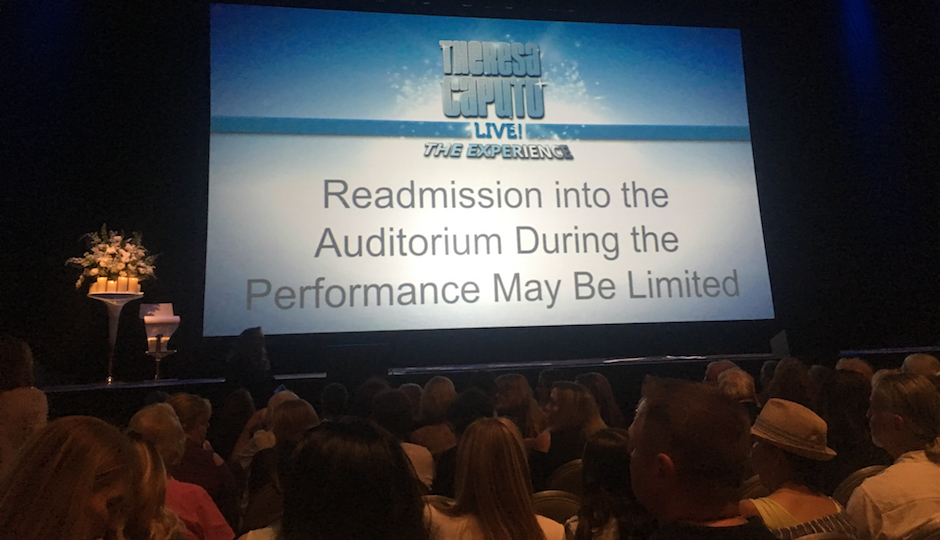 The only shot I got inside the theater before the phone police intervened.

Our conversation was interrupted by an oversized security guard, who told me to turn my phone off and put it away or he’d eject me from the theater immediately. They were very vigilant about this point. According to a recorded announcement that played in the theater, the cell phone restriction was in place so that the phone signals did not interfere with the wireless microphones being used during the event. But I’m not buying it. More on that later.

After everyone was asked to stand for the National Anthem — again, I’ve never seen that at the Borgata before — Caputo appeared from behind a screen wearing a sparkly, sleeveless multi-colored striped dress and a giant emerald ring.

She thanked the veterans in the audience, asking them to stand and be recognized, she encouraged folks to sign up for her $19.99 fan club (not because she wants their money, she explained, but because she wanted them to have access to pre-sales and such so as not to have to pay scalper prices), and she did a stand-up routine, of sorts.

“My favorite part of this is when I look at a woman and say, ‘Did you lose your husband?’ and she replies, ‘Um, actually it was another woman’s husband I lost.'”

“I curse a lot, and I’m Catholic. People say, ‘She’s going to hell because she curses like a sailor.’ That’s right, I like to curse. I’m from Long Island. I’m pretty sure I’m going to hell for talking to dead people — not for cursing.”

The crowd laughs. Caputo is genuinely funny, a bit self-deprecating, and charming in a way where you’d want to have her at your next dinner party.

But the laughter shifts quickly to tears. And lots of them.

She walks out into the audience, trailed by two high-definition cameras that feed the action onto three screens, switching back and forth to whichever camera has the most effective angle. Meanwhile, staffers run around as she works the room, getting wireless mics into the hands of her subjects-of-the-moment.

As she strolls through the room, she says generally vague things that she’s getting from the beyond — an older man who has passed, a young man who died violently, someone who committed suicide, the number seven, etc. — and waits for someone to nod their head or raise their hand affirming the connection. In other words, she doesn’t walk up to a particular person, look at them and say, “Your father died three weeks ago of cancer.”

Sometimes she gets two or three unrelated people standing up regarding a particular communication. She feels them out, asking questions, looking at objects in their hands (photos, a necklace, a stuffed animal) and then focuses on one or the other depending on the responses, depending on what she’s getting from them. The other people don’t sit down, and she’ll bounce back to them if they start nodding when the person she’s currently on is shaking her head.

And when she just can’t get a yes, she doesn’t let that stop her.

“Did he write you a note shortly before he died saying I’m sorry?” she asks one woman.

Caputo is quick to recover:

“The next time you’re in a card store and you see a card that says, ‘I’m sorry,’ know that this is from him to you.”

That’s how it all goes. Vague things turn more specific based on body language or verbal clues. Mistakes are deflected. It all happens so quickly, so it’s hard to keep track, to keep score.

It’s what’s known as cold reading in magic circles, as opposed to hot reading, in which the magician or medium has secretly obtained information about their target in advance. (See: Peter Popoff.)

If Caputo really had any special powers — or if she were employing hot reading techniques — her information would be a lot more specific and clear, and she wouldn’t be wrong so often. And if they permitted people to take video of the performance with their phones, allowing the show to be dissected in great detail after the fact, it really wouldn’t impress anyone.

Aside from this whole cold reading routine, Caputo attempts to act as a therapist or grief counselor for the suffering.

She engages a family whose son died violently two weeks ago and says he’s telling her that there’s nothing they could have done, that they shouldn’t feel guilty, that they should move on with their lives and that he’s in a better place. The mother can’t control her tears, and much of the audience cries right along with her.

Caputo tells a tearful young widow that her husband says she looks pretty.

She says there’s someone near her — she can’t quite locate the right person in the back section of the room — whose son died from a self-inflicted gunshot wound. It wasn’t, she insists. It was an accident.

She tells an older man that his dead wife wants him to start dating and that she really wishes he’d finally learn how to make the bed.

She consoles a beyond-distraught woman who tells Caputo that her mom jumped in front of a train because her boyfriend told her to do so.

Caputo speaks with a young boy — he was so cute, maybe six or seven — whose daddy had passed. Not a dry eye in the house.

There’s so much raw grief in the room, so many unanswered questions, and Caputo does her best during the two hour-plus show to “help” those in need.

But she never quite got around to the South Philly woman seated to my left, who pulled out a photo of her and her husband from a cruise some years ago.

“Wasn’t he handsome?” she asks me.

I ask her if she wants her money back. She shakes her head no.

“She did manage to help some people,” she says, before a pause. “I guess.”