The owner of the company responsible for the bar operation flatly denies any wrongdoing and calls the bartenders "unprofessional" and "unruly." 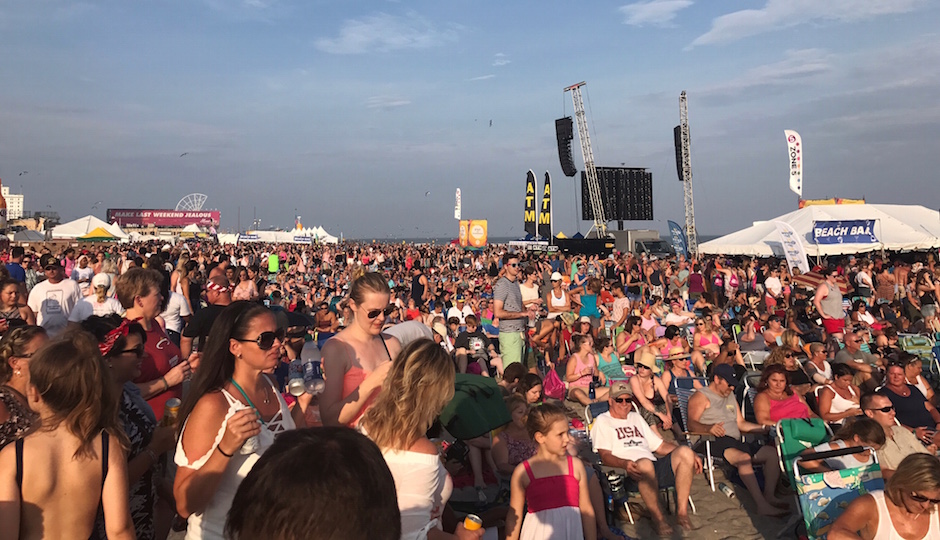 The crowd at last week’s Pink concert on the beach in Atlantic City. (Photo courtesy atlanticcitydesign.com)

Last week, tens of thousands of Pink fans crammed onto the Atlantic City beach for a concert by the Grammy-winning singer. With tickets priced at $72 for general admission and way higher for VIP access, Pink and the concert producers no doubt walked away with a ton of money. But the bartenders who worked the concert say they didn’t make out quite so well.

We spoke with nine bartenders from the Pink concert who believe that thousands of dollars of tips went missing that night. They are upset that when tips at the outdoor concert complex were pooled and then divided among the 88 bartenders and barbacks, each of them netted only $250 on top of their shift pay.

“That’s just ridiculous,” says Hayles Doyle, a bartender from Willow Grove who worked the Pink concert, which reportedly brought close to 50,000 people to the Atlantic City beach. “There were tens of thousands of people there. Granted, not all of them were drinking. But people were getting four, five, six, seven drinks and leaving a significant amount of money on top of it. We were getting tipped like pie. People were good and drunk and leaving us 20s all the time.”

The way the bartenders see it, based on the volume of business and the way that customers were tipping, they should have walked away with a lot more than $250 each.

“At least $500,” says Stan Butovetskiy, who works at Village Whiskey. “But we never saw any kind of a report. There was no transparency.”

“Five hundred is really conservative,” insists Jenn Oliver, who also slung beers and cocktails at the Pink concert. “They were tipping me on Cokes and waters. They were tipping really big time.”

Representatives of the Florida-based company that supervised the bar operation admit digging into the bartenders’ tip jars, but say they were doing so merely to make change for customers, and did not keep any part of the gratuities.

“I have never worked with a bigger group of unprofessional bartenders in my life,” said Felice Firestone, who operates Golden Gate Foods with her husband, Greg. “They were so unruly about us trying to make change out of the tip jars, but absolutely no one stole their tips! We were doing the best we can. This was our first time in A.C.”

Firestone’s response doesn’t satisfy Nanci Pietras, who organized the group of bartenders who worked the show. “I sometimes make $500 or more just working in the lounge at the Ritz,” she says.  It was at the Ritz bar that Pietras met a local man named Bruce Bottomley III earlier in the summer. Bottomley told her about the Pink show, which Bottomley’s Philly concession and catering company Prince Catering, which also does business as P.C. Catering, was set to handle.

But, Pietras says Bottomley told her, he couldn’t actually facilitate the beer and booze aspect of the event, because New Jersey wouldn’t give him a liquor license thanks to some issues in his past. Bottomley confirmed as much to Philly Mag but refused to speak about his previous arrests for bad checks and theft by deception, charges that he later pleaded guilty to, according to court records.

In any event, since Bottomley wasn’t able to sell alcohol in Atlantic City, he tapped the Firestones, his old friends from Florida, to run the bar while Bottomley’s P.C. Catering would provide food services.

It is at Greg and Felice Firestone that the bartenders are pointing their fingers.

According to Pietras, at the start of the night, the bartenders were provided far too little cash for making change given the size of the event, so they almost immediately ran out of small bills. The bartenders say Felice Firestone started going into their tip buckets for the stated purpose of making change.

“I screamed at her to get her hands out of our tip buckets,” says Pietras.

“I’ve been in the industry for 20 years,” says bartender Kevin Hickman, who also worked the show and says he’s made more than $500 in tips working events a fraction the size of the Pink concert. “I’ve never seen anything like it. They had no reason whatsoever to touch anybody’s tip buckets. The money never added up.”

Other bartenders say that they also told Felice Firestone to stay away from their money but that she persisted. They also say that another woman, Tiana Palmisano, who was reporting directly to Greg and Felice, had her hands in the tip buckets as well. Palmisano says no money was stolen.

“They’re just being crybabies,” Palmisano says of the bartenders.

The bartenders point out that Felice Firestone was carrying around a backpack full of money most of the night and that Greg Firestone was seen walking away from the bars with a trash bag full of cash. The Firestones say they were just collecting the night’s receipts.

“We do have a right to move money around, don’t we?” responds Felice. “What they are saying is blasphemous. This is out-of-control, which doesn’t surprise me, since some of them were whacked out of their minds.”

“The bartenders are telling you a straight-up fabricated story,” says Bottomley, who later acknowledge that because he was busy with food concessions, he had no first-hand knowledge of what had happened at the bar. “I’ve known Greg and Felice for years, and I would stand behind them. It’s the bartenders who should be locked up.”

Pietras and some of the other bartenders say they are considering suing the Firestones or taking other legal action.

Live Nation, which produced the Pink concert in Atlantic City, had no comment for this story, but some of the bartenders said that when Live Nation representatives got wind of the bartenders’ complaints, the company stepped up and paid each of the 88 bartenders and barbacks $100 for their troubles.