The beloved former music director of Valley Forge Military Academy has raised more than $10,000 in just a week. 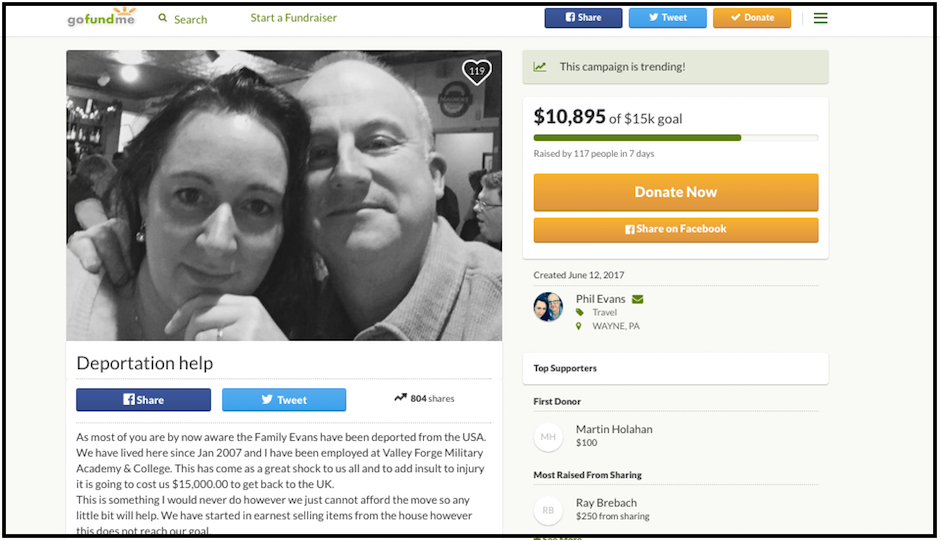 A screenshot of the Phil Evans GoFundMe page.

Typically, when a Kickstarter or GoFundMe crowdfunding campaign lands in our inbox, it’s to raise money for underfunded schools, theater endeavors, or a band’s new CD. But one campaign we heard about last week is something very different.

Main Line resident Phil Evans launched a GoFundMe page one week ago to raise $15,000 to help cover costs associated with his and his family’s impending deportation from the United States.

“As most of you are by now aware the Family Evans have been deported from the USA,” Evans wrote. “We have lived here since Jan 2007 and I have been employed at Valley Forge Military Academy & College. This has come as a great shock to us all and to add insult to injury it is going to cost us $15,000.00 to get back to the UK.”

Evans, who lives in Wayne with his wife and three daughters, was until recently the director of music at Valley Forge Military Academy & College. We reached out to him to learn more about the matter. “I’ve been told not to talk to anyone about it,” he told us, suggesting that we ask Valley Forge Military Academy for more information. A spokesperson at the school told us that the school was unable to comment on the deportation or the fundraising campaign.

“This is something I would never do however we just cannot afford the move so any little bit will help,” Evans continued in his GoFundMe plea. “We have started in earnest selling items from the house however this does not reach our goal. The cats are coming with us as we just cannot leave them as they have been a part of the family for 8 years.”

Whatever the reason for the family’s deportation — a call to the U.S. Immigration & Nationalization Services office proved useless, and two immigration attorneys we spoke with were perplexed given the family’s long residency — Evans has plenty of support out there. In just one week, he’s raised more than $10,000 of his $15,000 goal.