The Biggest Winners and Losers in Philadelphia’s 2017 Primary Election

It was a paradigm-shifting race: Progressives, Black Lives Matter, and the anti-Trump movement won, while Johnny Doc and the police union lost. Bigly. 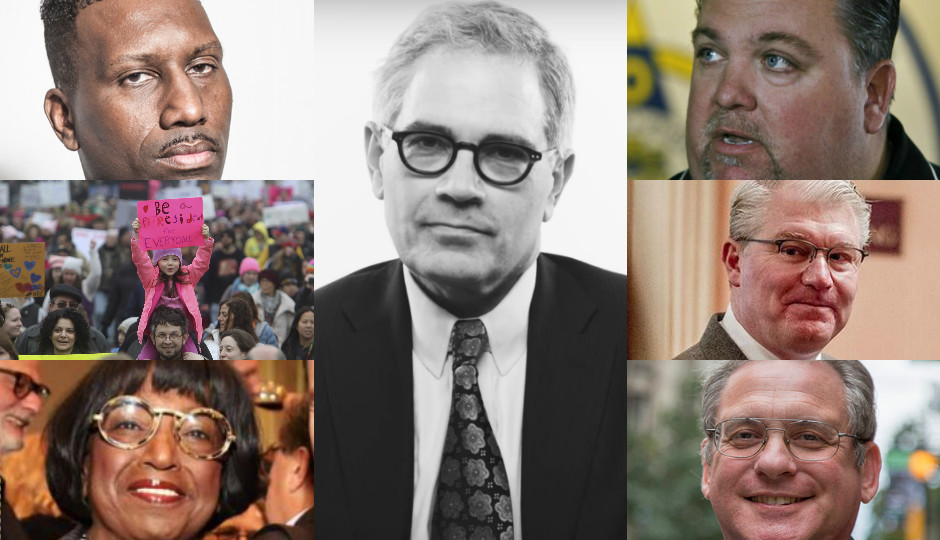 Philadelphia’s election on Tuesday was a game-changer. The winner of the Democratic primary for district attorney is a criminal defense lawyer who has never prosecuted a case in his life and made a name for himself by suing law enforcement over alleged abuses and representing progressive activists like Black Lives Matter. A young ex-budget director crushed incumbent City Controller Alan Butkovitz, the ultimate political insider, in an upset victory.

Those two Democratic nominees, Larry Krasner and Rebecca Rhynhart, are the race’s biggest winners. But who are the other winners and losers — the issues, interest groups, and kingmakers — in the election? Here’s our list:

Philadelphia may be a Democratic town, but it traditionally hasn’t really been a very progressive one. As I wrote earlier this year, “The Philadelphia School District has been one of the most charter-friendly districts in the nation, and the City Council president insists raising the minimum wage isn’t legally possible. Last year, most of Philly’s top Democrats endorsed Hillary Clinton over Bernie Sanders. … The district attorney’s race may be a referendum on whether Philadelphia wants to be a progressive city or a Democratic one.”

On Tuesday, Philadelphia voted to be a progressive city. Krasner’s nomination is arguably the biggest electoral victory that Philly’s progressives have ever achieved. He had the most progressive platform of all the DA candidates, promising to end cash bail for nonviolent offenders, never seek the death penalty, and severely restrict the civil forfeiture system. Krasner is also the city’s most well-known attorney for left-wingers: When he kicked off his campaign in February, he was surrounded by Black Lives Matter activists, Occupy rabble-rousers, ACT UP alumni, and other protesters he’d defended in court over the years. And Krasner performed best in liberal enclaves in Center City, West Philly, and Northwest Philly. Could this be the beginning of progressive takeover of city government?

This past year has been a major letdown for advocates of criminal justice reform. It was finally looking like a bipartisan consensus had emerged on scaling back the War on Drugs and reducing the prison population, and then President Donald Trump was elected on an old-school “law and order” agenda. Attorney General Jeff Sessions is now instructing prosecutors to seek the harshest sentences for all defendants, including low-level drug offenders, and Milwaukee Sheriff David Clarke, who oversees a jail where staff kept water from a mentally ill man until he died of dehydration, just got a top job with Homeland Security.

With Krasner’s victory, criminal justice reformers finally have something to celebrate. Reformers across the country will be looking to Krasner to enact major change.

Millennials have largely stayed out of the wild world of Philly politics, voting less often than any other generation here and boasting few representatives in local government. While the City Commissioners’ office says it won’t be able provide a breakdown of voter turnout by age for a few weeks, young people were among Krasner and Rhynhart’s most vocal supporters.

Did dissatisfaction with Trump drive voters to the polls this week? It sure looks like it: Krasner’s victory could be read as a direct reaction to a Sessions-controlled Department of Justice. Rhynhart’s nomination, too, was likely driven in part by the anti-Trump movement, which has been led by women who are outraged by Trump’s misogyny and the underrepresentation of women in government, among other things.

Voter turnout went up on Tuesday, too: With 98 percent of precincts reporting, turnout was about 18 percent in Philly. That’s a 50 percent increase from the 12 percent voter turnout in 2009, the last time there was a competitive DA primary.

Black Lives Matter activists rarely, if ever, endorse politicians. But Asa Khalif, face of the Black Lives Matter movement in Philadelphia, made an exception for Krasner. He’d defended Khalif and other Black Lives Matter protesters in court, after all. Plus, Khalif told the Intercept, “Protest is going to get us to the table. Once we’re at the table, we need to have an agenda, we cannot just keep screaming ‘no justice no peace.’ We need to be in the mix. We need allies in government that are going be true to their word. We have a lot of people who promise a lot of things; we need someone that we can pick up the phone and they will answer when we make that call.”

On Tuesday night, it was Khalif (along with City Councilwoman Helen Gym) who declared victory for Krasner at his election night party.

Our Revolution, a political action committee led by Bernie Sanders’s former presidential campaign manager, endorsed Krasner. Sanders alumni were also on Krasner’s campaign. And Krasner himself appears to be a fan of the Vermont senator: He told a reporter that Bernie would’ve won.

The billionaire Democratic donor dumped $1.45 million into an independent political committee supporting Krasner. It’s hard imagine Krasner winning without that boost. This isn’t the first time Soros has gotten involved in a DA’s race: He’s spent more than $3 million on other progressive candidates in prosecutor’s elections across the country.

It was one of the major turning points in the DA’s race when kingmaker and former City Councilwoman Marian Tasco, as well as her protégé, Councilwoman Cherelle Parker, endorsed Krasner. (Councilwoman Maria Quiñones Sánchez, another winner of this election, is a longtime friend of Krasner’s who encouraged Tasco and other Democrats to support him.) Tasco is one of the co-founders of the Northwest Coalition, a group of African-American politicians who were among Jim Kenney’s most powerful allies in the 2015 mayoral race. Tasco is also leader of the 50th Ward, which is chock full of diehard voters who come out in off-year elections. Krasner won 56 percent of the vote in Tasco’s ward — a much bigger share than the 38 percent he received citywide — and the ward, of course, had above-average turnout.

In an insurgent’s election, one of the biggest political insiders in the city somehow came back to life, zombie-style. Mark Cohen is a scion of the Cohen political dynasty, and he was the longest-serving state representative in Harrisburg until insurgent Jared Solomon knocked him out of his seat in 2016. On Tuesday, Cohen — who has been accused of talking to plants and being of a serial abuser of taxpayer-funded “per diems” — won the Democratic primary to become a judge on the Court of Common Pleas. Cohen’s campaign motto? “He made laws. So he knows laws.” We’re not kidding.

Another group of political insiders that did well despite the electorate’s anti-establishment mood was Philadelphia’s Ceisler family. Ellen Ceisler, a judge on the city’s Court of Common Pleas, won the Democratic primary for one of two spots on Pennsylvania’s Commonwealth Court. Ellen is the ex-wife of bigwig political consultant Larry Ceisler. Larry gave a $100,000 loan to Ellen’s campaign, though he says it wasn’t ever spent. The former couple’s son, Danny, managed Ellen’s campaign.

Sure, Khan lost the Democratic primary for district attorney. But the progressive ex-prosecutor, who came out of nowhere and had never run for office before, did a great job fundraising. He also finished in second place in a field of seven candidates, and was the second choice for many Krasner voters. We wouldn’t be surprised if Khan ran for another office — or made some other big move — in the near future.

John McNesby, longtime chief of Philadelphia’s police union, called Krasner’s candidacy “hilarious” back in February. It was Kranser, after all, who had convinced current District Attorney Seth Williams to stop calling a group of narcotics officers as witnesses after they were indicted on corruption charges. (The cops were later acquitted.) The Fraternal Order of Police supported DA candidate Rich Negrin, a former city managing director who had all the makings of being a frontrunner (and who had praised stop-and-frisk in the past), and, well, Negrin finished a distant third. Who’s laughing now?

The big questions moving forward: Will McNesby take revenge on Kranser by supporting Republican DA nominee Beth Grossman or an independent candidate in the general election? Can McNesby or his allies persuade a deep-pocketed donor to fund a super PAC against Krasner?

Two years ago, electricians union boss Johnny Doc was at the top of his game: He’d helped put his brother on the state Supreme Court and played a major role in getting Mayor Kenney elected. But nothing in politics is permanent, and now Dougherty is at one of his lowest points ever: His longtime ally Butkovitz was crushed Tuesday. His choice for DA, Jack O’Neill, finished in fifth place with a measly 6 percent of the vote, despite the fact that a IBEW Local 98-funded super PAC backed him. (Even in the First Ward, where Dougherty was the ward leader until more than a year ago, O’Neill got just 13 percent of the vote, while Krasner won with 54 percent.) Meanwhile, the union’s favorite candidate for the Court of Common Pleas, David Conroy, also lost Tuesday. (And, of course, the FBI is still investigating Local 98!)

The election of Krasner was a rebuke to the legacy of Lynne Abraham, aka the “deadliest DA” in America, and Frank Rizzo, the “tough on crime,” demagogic police commissioner-turned-mayor. (Abraham also supported Khan for DA.) Of course, Rizzo still lives on, just outside the city’s borders now.

Rich Negrin should have been one of the leading contenders in the DA’s race. As Michael Nutter’s former managing director, Negrin knew every political operator in town. He also won the endorsement of the FOP. But Negrin misjudged the electorate, campaigning on several somewhat moderate ideas in a year in which voters wanted radical change. (Even Michael Untermeyer, a former Republican who ran for DA, realized this and campaigned on a progressive platform.) Negrin also did a poor job of fundraising, getting outmatched by the much less experienced Khan. Where does Negrin go from here?

Untermeyer, a perennial candidate in local elections, put more than $1.25 million of his own money into his campaign for district attorney. That bought him fifth place with 8 percent of the vote. Compare that to Tariq El-Shabazz, who had virtually no money and tons of baggage: He finished in fourth place with nearly 12 percent.

As an incumbent, a decades-long politician, and a ward leader, Butkovitz should have had this sewn up — and he lost it utterly. Even in his own ward, he got only 55 percent of the vote. And despite being endorsed by the Democratic City Committee, he won just 17 of the city’s 66 wards. Butkovitz swears he’s not done with politics, but it doesn’t look like politics agrees.