You do respect them, don't you? 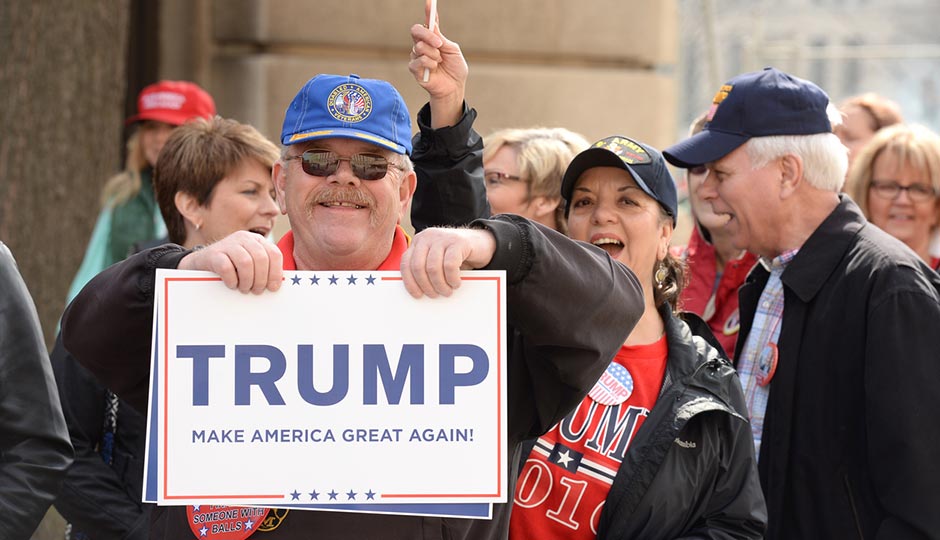 “The first 100 days used to be a honeymoon period for presidents, but not for him. Everybody’s hammering him, especially the news media, but he’s doing the best he can.”

That was said by Jack Bednarksi in this recent Philly.com article. Bednarski is a small-business owner in Luzerne County, Pennsylvania. I don’t know him. But I’m going to bet, like most people, he’s a pretty good guy. And yes, for Pete’s sake, he’s a Trump supporter.

Can you still respect him? Of course you can.

Hopefully you haven’t already formed your opinion of him just because he voted for Trump. Some people may say “Oh, he’s probably uneducated” or even worse, that he’s a racist, a homophobe, or — more likely — just an idiot for voting for such a man. Let’s hope you’re not one of those people. You could still have dinner with Jack Bednarski, right? Or buy the furniture that he sells? Or work alongside him in your company? Even though he’s a Trump supporter. You’re better than that.

I recently heard a radio interview with Lena Dunham, the creator of HBO’s show Girls and an outspoken opponent of Trump. When asked if she could have someone working in her employ who supports the president, her response was a vehement “No!” Can you imagine that? Regardless of talent, experience, and value, she couldn’t work with someone just because he or she voted for a different presidential candidate than she did. C’mon, Lena, I love your show (well, at least the first two seasons), but not even Jack Bednarski? Sadly, many feel like as Dunham does.

But you are more understanding. It frustrates you that Donald Trump lost the popular vote, but you understand that 63 million Americans still voted for him. 63 million people! I speak to thousands of businesspeople across the country every year. Most of them live somewhere between New York and San Francisco. Many of them include themselves among the 63 million who voted for Trump and, 100 days into his presidency, the vast majority say they’d do it again, according to most polls. You understand this, too. You’re not Lena Dunham. You would work alongside any of them.

Why? Because you still respect them – and even though you disagree with their politics, you understand a few important things about them.

You understand that Trump supporters are good people. These are people like Jack Bednarski. They care about our country as much as you do. They have families. They work hard. They go to churches and synagogues or sometimes nowhere at all. They like puppies. They drink coffee. They ride bikes and donate to charity. They would help a person in need, regardless of that child’s race, gender, or sexual orientation. They love their neighbors and community. They have the same fears and the same hopes as you and I. They want what’s best for their children. Sure, there are those on the fringe who support hate, racism, or violence. But every political group has its crazy extremists – even the left. You’re no better than they are. They are no better than you. You get this.

You understand that Trump supporters voted for Trump for the same reasons you voted against him. There are things that are important to you. You want better healthcare, a cleaner environment, more and better jobs, less crime, greater help for the poor, more security, more equality for women and minority groups … and a better, healthier, richer life for your children. You understand that Trump supporters want the exact same things. Who doesn’t? It’s just that both sides, like a husband and wife lost on vacation, can’t decide which road to take. You also know that you don’t know everything – and neither do all the academics, experts, and pundits. You realize that people come from different places and have different experiences and perspectives, and that no one is completely right. Everyone has something to learn from someone else — even if it’s from a Trump supporter.

You’ve learned not to patronize Trump supporters. When Meryl Streep makes a political speech at an awards show, she is certainly galvanizing her audience. But she isn’t winning over anyone over who doesn’t already agree with her — they just turn the channel. When the New York Times publishes another front-page article condemning the Trump administration, its readers nod their heads in agreement. But the people that voted for Trump aren’t reading the New York Times. Are these people ignorant? Are Meryl Streep fans and New York Times readers smarter than the 63 million Trump supporters? You know they are not. But sometimes celebrities and some in the media think they are – they may deny it, but you know they do. And you’ve learned that this drives Trump supporters nuts. They hate being patronized by people who think they are smarter. They hate being told what to do from someone who living a very different life from theirs. No one likes being lectured to – particularly by strangers. You know this.

Winston Churchill once said that the biggest argument against democracy was a five-minute conversation with the average voter. That may be true. But the reality is that in a democracy we’re all equal. And Donald Trump is our president and – like his supporters, you want him to succeed, whether you voted for him or not. When you meet a Trump supporter like Jack Bednarski, you may not agree with his opinions, but you respect that he has one. You don’t judge. You’re a better person than that. And, most likely, so is he.