Surprise, Surprise: The NFL Draft Is (So Far) Actually a Good Look for Philly (Mostly)

Of course, there were the expected few bad apples — and asses — in the bunch. 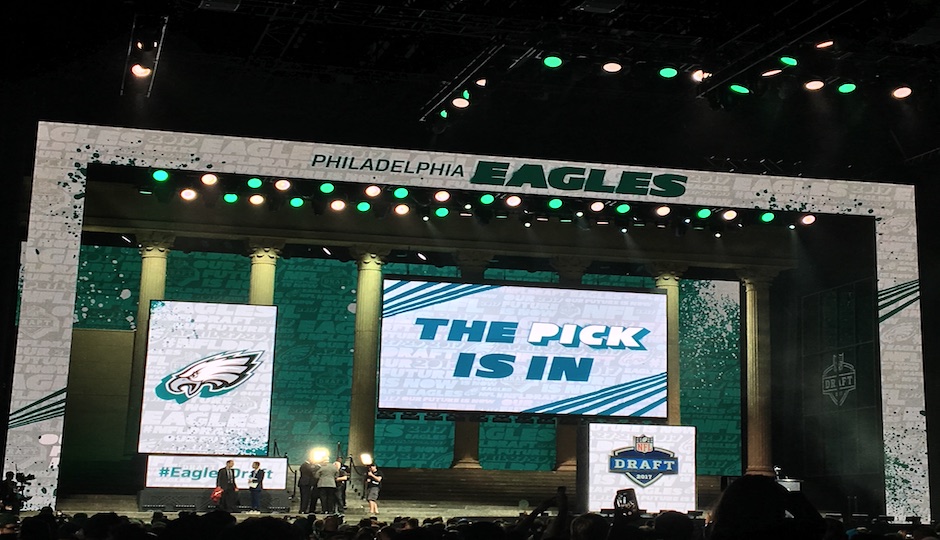 We did it, Philadelphia. The first round of the NFL Draft went off without a hitch. The league is reporting that nearly 100,000 people visited the NFL Draft Experience set up along the Parkway on Thursday, a record number for any event in draft history. Well done.

And Birds fans, you know they showed up in full force. Of course, there were the expected few bad apples (and asses) among the bunch, but even they couldn’t spoil the success of the night for national pundits:

Draft never has been this raucous – ever. Not even close. Philadelphia bringing it.

Leading up to last night’s big event, there was buzz that the draft could be making a return to the city again next year, as was the case when the NFL packed up the show and left Radio City Music Hall for Chicago in 2015 and 2016 – and Commissioner Goodell (who was mercilessly, beautifully booed) said that “Philadelphia is raising the bar” during the telecast. Sorry, Victor.

So don’t be surprised if your commute to work is blown up again this time next year, Fairmounters. Might want to leave a few minutes ahead in the future.

As for picking Tennessee defensive end Derek Barnett, a bit of a McNabb 2.0 situation here?

Can’t say we understand booing Barnett, who only broke all-time Eagles great Reggie White’s career sack record at UT and has been drawing comparisons to Baltimore Ravens stud Terrell Suggs. But good thing Derek doesn’t give a shit what you think — he appreciated the love from the fans that likely weren’t giving the finger on live television.

But there were plenty of diehards that didn’t think so kindly of the selection, which has been labeled as somewhat of a “safe” choice in its aftermath.

So proud of you guys. pic.twitter.com/nIxbh4NidH

Easy kid, no need to record your desperation for posterity here. There will be more meaningful times in your life when the Eagles make you want to end it.

But now’s not the time. The time for second-guessing draft picks is for when they’ve actually stepped foot on the field. So let’s all make sure we get back out there tonight and show some of that real Philly love that all of us good folks cherish.

Except toward Cowboys fans. Never to those bastards.