On Saturday night, around 20 protesters held a demonstration over racism at the controversial Gayborhood bar. 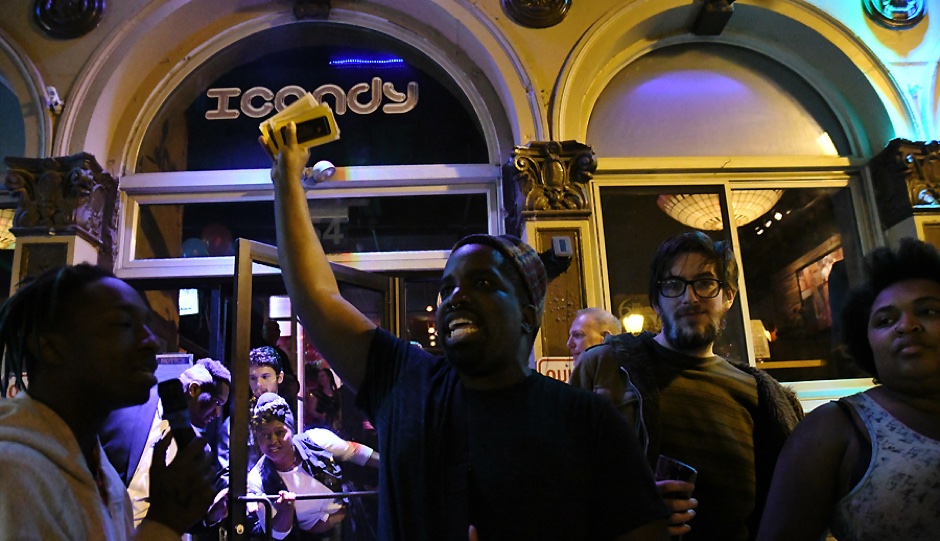 Nearly a year after G Philly first reported allegations of racial discrimination over a “no Timberland boots” policy at ICandy nightclub, activists gathered in protest outside the controversial Gayborhood bar’s sixth-anniversary celebration on Saturday night.

Around 20 community activists attended the protest, which was organized by the Black and Brown Workers Collective (BBWC). At 10:30 p.m., the protesters marched to the front of the building, which was surrounded by police, and played the infamous n-word rant recording by ICandy owner Darryl DePiano in a loop over a bullhorn. The activists also began to pass out “Anti Blackness” free drink passes with DePiano’s racist quote, as they did when they last protested the establishment back in September.

G Philly was on location to film some of the demonstration:

“Nig, nig, nig, nig, niggers — that’s what Darryl DePiano called black people,” said BBWC co-founder Abdul Aliy Muhammad through a loud mic at as patrons walked across ICandy’s celebratory red carpet. “Anyone who would go into a place after this owner has showed his racism is complicit in the disrespect of black people.”

“Don’t get upset if we call you out on racism and white supremacy. … The fact that this man still can own a bar after calling people niggers is troublesome,” said an activist named Deandra to the crowd. “If you can still walk into this bar after knowing this, then shame on you.”

Around 11 p.m., as the crowd began to grow, tensions arose between some protesters and patrons. There were multiple verbal confrontations between visibly intoxicated guests who claimed the protest was “unnecessary” and activists who told them to “wake up.” Some patrons gave the protestors the middle finger and mocked them. In one instance, an angered patron threw a punch at the group and was restrained by police.

“I didn’t know what was going on until I heard that horrific audio being played — it’s not worth going in there if the owner is racist,” said Kat Stevenson, from Delaware. Stevenson initially planned to go to ICandy after hearing that RuPaul’s Drag Race star Michelle Visage was making a special appearance. When Stevenson walked on the red carpet getting ready to enter the club with her friends, she felt her “moral conscience kicking in” and turned away. The crowd of protesters cheered for Stevenson and her group of friends when they left the establishment.

By midnight, ICandy staffers began to roll up the red carpet and disassemble the roped-off entrance as the crowd started to die down.

“I understand why there are protestors here tonight and I respect their right to do so,” ICandy general manager Jeff Sheehan told G Philly. “I just want to make sure everyone around here is safe.” The activists left ICandy around 12:30 a.m., continuing anti-racism chants as they marched throughout the Gayborhood and in front of Woody’s nightclub. According to Philadelphia Police Department, there were no arrests made.