Despite conflicting reports, organizers claim it was a peaceful event disrupted in the end by others unaffiliated with the counter-protest. 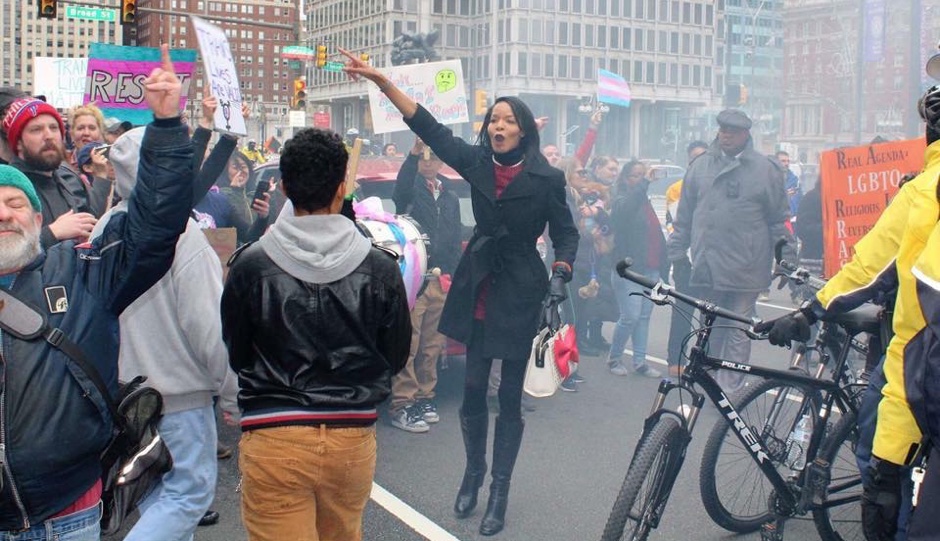 On Saturday, the Mayor’s Office of LGBT Affairs, in collaboration with GALAEI, Trans-health Information Project (TIP), Attic Youth Center, William Way, ACLU, Mazzoni Center, and other community organizations, held a “Pop-Up Love Party” to protest the anti-trans “Free Speech Bus Tour” that was scheduled to appear. The National Organization on Marriage (NOM) has been driving across the East Coast for several weeks in a striking bright orange bus with transphobic messages and images, which has been met with protestors and vandalism.

The event started off as a peaceful assembly that included a raising of the transgender pride flag from 11 a.m. to noon:

After the event was over and the crowd mingled around City Hall, the controversial orange bus with transphobic messages — including “It’s Biology: Boys are boys … and always will be. Girls are girls … and always will be. You can’t change sex. Respect all” — appeared. Community members then approached the front of the bus to block its way:

While in the bus, NOM members filmed the interaction from their viewpoint. In their YouTube video, you can see smoke bombs apparently being set off by a group of unidentified individuals wearing all black while Sharron Cooks, the chair of the Mayor’s Commission of LGBT Affairs, is signaling people to move from the front of the bus as they chant “Trans Lives Matter.” Police are hovering at the front of the bus. You can also hear things being thrown at the bus:

The bus stayed no longer than 10 minutes before exiting City Hall and heading out of the city. According to the Philadelphia Police Department (PPD), one individual wearing all black was arrested for “disorderly conduct” and released on Saturday. PPD also told G Philly that eggs were thrown at the bus.

Black-clad individuals have been photographed vandalizing the bus in other cities, such as Boston:

Since the event, news outlets have mostly focused on the melee afterward rather than the counter-protest itself. Cooks told G Philly that the black-clad individuals “were not a part of the event and were only present when the bus arrived. Our event at City Hall was a very loving and empowering event for the trans community and allies, the media’s current focus on the unintended aftermath wasn’t reflective of what our true intentions were.”

The Office of LGBT Affairs has encouraged community members to share their experiences from the event on Facebook to counter the transphobic messages being shared through media images of the bus:

Here were some of the social media reactions:

#Philly making me proud and not allowing #FreeSpeechBus to come to town. #LGBTQ https://t.co/TTvUaIjDFD