We might not get as much snow as predicted (surprising pretty much no one), but wind, sleet and ice are still problematic. 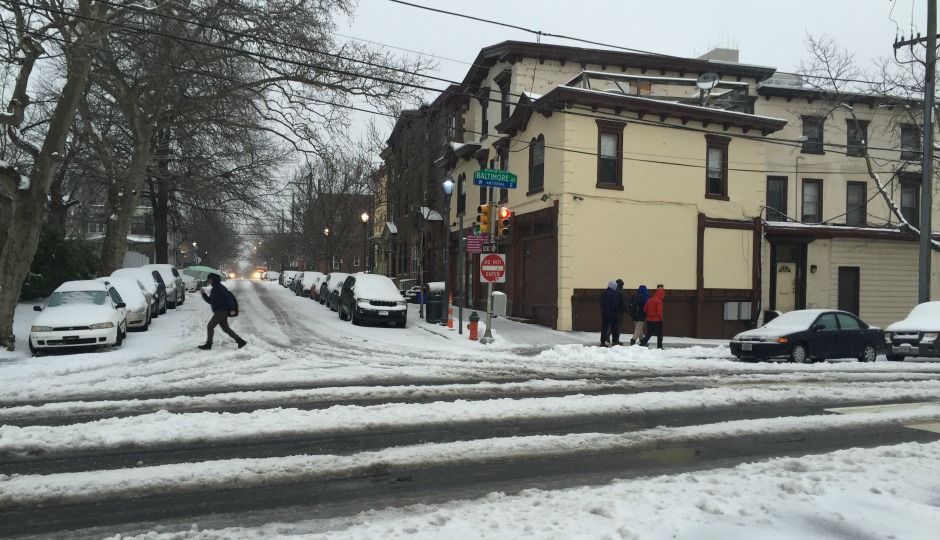 The potentially “life-threatening” Winter Storm Stella rolled in overnight, and the snow, sleet, hail and wind will continue throughout the day. Here’s a look at how the storm is impacting the region so far.

As of 8 a.m. this morning, about 2-3 inches of snow coated the ground in Philadelphia. All public and parochial schools and many local attractions are closed today.

It’s unlikely that the city will get the 12 inches of snow that was forecasted – but high winds, sleet and ice still pose a problem.

The wind gusts are really picking up here in Philly making the sleet feel more like tiny bullets as they hit your face. pic.twitter.com/NpvRWydZGJ

The conditions are troubling for commuters. SEPTA officials said the storm is bringing some “problems” this morning. Regional Rail service (which is operating on a Saturday schedule under its Severe Storm Service Plan) is seeing some delays, as are trolley lines and the Norristown High Speed Line.

The Market-Frankford and Broad Street subway lines are running smoothly. SEPTA General Manager Jeffrey D. Knueppel said the subway will likely remain the best mode of public transportation in the city today. For current updates on all SEPTA routes go to System Status.

All interstates and expressways east of Interstate 99 (which runs between I-76 and I-80 through Altoona and State College) have a reduced speed limit of 45 mph. Empty trailers, towed trailers, buses, motorcycles and RVs are banned from those roads.

In other news, PECO has not yet reported any substantial power outages as a result of the snow. You can track outages here.

Many people are seeing flight cancellations and delays, as the Philadelphia International Airport currently has a travel advisory. Updates are available on PHL’s website.

Remember – don’t park on snow emergency routes today. Plus, trash and recycling collection is suspended for the day.

Despite the fact that the storm might actually be somewhat of a dud, Philadelphia will remain under a winter storm warning until 6 p.m. tonight. Areas with blizzards warning – nearby, that includes Montgomery County, Bucks County, Chester County, Berks County and New Jersey’s Mercer and Hunterdon counties – saw slightly more substantial snowfalls this morning.