Happy birthday to the DuPont-developed fabric that revolutionized the fashion world. 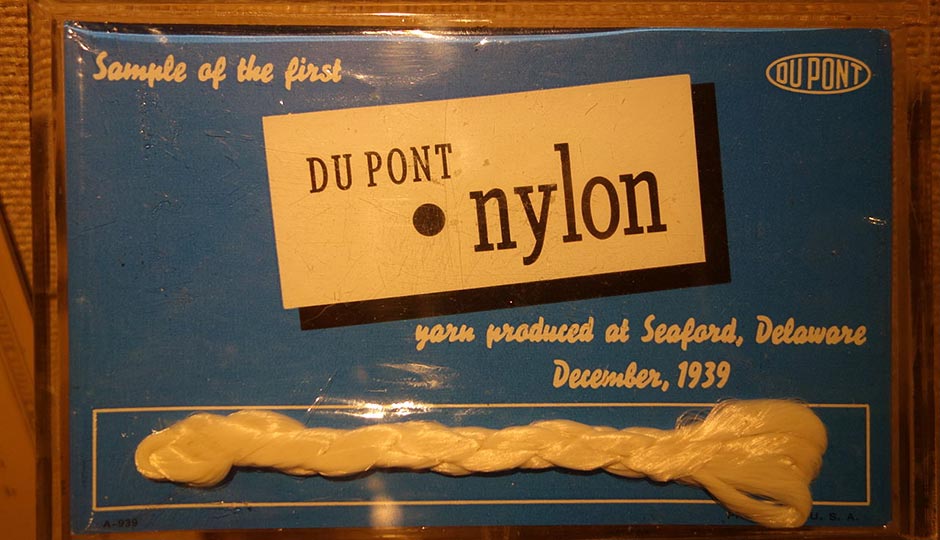 When I was a kid, I had an elderly widowed uncle who every Christmas bought each female in the family — and there were a lot of females in our family — three pairs of nylon stockings, nestled into pretty hosiery boxes from Wanamaker’s. We never really talked about how peculiar this was. (I mean, stockings are pretty much underwear.) But the invention of nylon by a DuPont scientist — it was patented 85 years ago today — changed the world, and clearly had a big impact on Uncle John, for whatever reason. (One theory was that he had a crush on a hot clerk in the hosiery department.) Here, in recognition of that 85th anniversary, are 11 things you might not know about nylon.

1. Nylon is the name given to a family of synthetic polymers that can be processed, via melting, into fibers, films and shapes. They’re used commercially in everything from clothing to lightweight luggage to molded car parts to food wrappings. It was developed by DuPont chemical company scientists via a long, painstaking process of experimentation with how molecules were linked together. The first product DuPont made from nylon was bristles for toothbrushes. The fabric form of nylon was rolled out for the 1939 New York World’s Fair and was first used for women’s stockings, which had hitherto been made from silk, the following year.

2. Among the names considered for this new miracle fabric was “klis,” which, of course, is “silk” spelled backward. Among the 400 other options were “Nuron,” which is “no-run” in reverse, and “Duparooh,” an acronym for — no kidding — “DuPont Pulls A Rabbit Out Of a Hat.” Guess “nylon” isn’t so bad.

3. Nylon wasn’t the first “artificial” fiber; rayon, made from processed wood pulp, had been developed by 1855. But nylon was the first fiber to be totally manmade, and it made a splash because the hemlines on women’s dresses had been creeping upward through the 1930s, showing more and more silk stocking. Those stockings got runs in them, and they were expensive to replace. Women were desperate for a more durable and affordable alternative.

5. Alas, no sooner did women get a taste of nylon stockings than the nation declared war in the wake of Pearl Harbor, on December 7, 1941. DuPont retooled its nylon production for military gear, including parachutes, tents, ropes and hammocks, and the stockings could no longer be found. Eight days after the war ended, DuPont announced it would again produce nylon for stockings. Pent-up demand resulted in the “Nylon Riots,” with customers clawing and fighting for their hosiery in department stores.

6. DuPont never trademarked “nylon,” considering it not merely a new product, but a new substance, as elemental as iron or coal. “It can be fashioned into filaments as strong as steel, as fine as a spider’s web,” DuPont’s Charles Stine told a women’s group in introducing the invention.

7. The U.S. patent for nylon was issued to Wallace H. Carothers, lead chemist for DuPont. He’d been hired away from Harvard in 1928 by DuPont’s offer of a weekly salary of $500 — nearly twice what Harvard had paid. A reclusive man prone to depression, Carothers lived outside Wilmington with three other bachelors in a house that became known as “Whiskey Acres” because of their carousing ways. He carried on a long-term affair with a married woman before eventually settling down and wedding a DuPont co-worker 15 years his junior.

8. Carothers, a hero in the chemical world, is also considered the father of neoprene, the first commercially successful artificial rubber.

9. On several occasions, Carothers dropped out of sight for periods of time; he was treated for depression at the Institute of Pennsylvania Hospital by renowned psychiatrist Kenneth Appel. Carothers once showed a colleague a capsule of cyanide he kept on his watch chain. As his depression worsened, he became tortured by doubts about the value of his work, left his wife, and moved back into Whiskey Acres. After his sister died in January 1937, he began a downward spiral, unalleviated by his wife’s announcement that she was pregnant. In April 1937 — before nylon had even been publicly introduced — he checked into a hotel in Philadelphia and committed suicide by drinking cyanide mixed with lemon juice, which he knew would accelerate the poison’s action. He was just 41. His daughter was born later that year.

10. Nylon and other artificial fabrics fell from fashion favor during the 1960s and ’70s, when “all-natural” silk, wool and cotton came back into vogue (and Vogue). And nowadays, fewer and fewer women wear dresses, let alone stockings. But the athleisure craze has made shiny, stretchy faux fabrics chic all over again. A few years back, my daughter posted an Instagram shot of her in the slinky artificial-fiber dress I made to wear to my brother’s first wedding back in 1972. It’s still in mint condition. That stuff lasts forever.

11. The Nylons, a terrific Canadian male a cappella group, took their name as a tongue-in-cheek fabricated tribute to the Chiffons, whose hits included “One Fine Day,” “He’s So Fine” and “Sweet-Talking Guy.”