Members of the Black & Brown Workers Collective confronted Mazzoni CEO Nurit Shein with a list of demands, including her resignation. 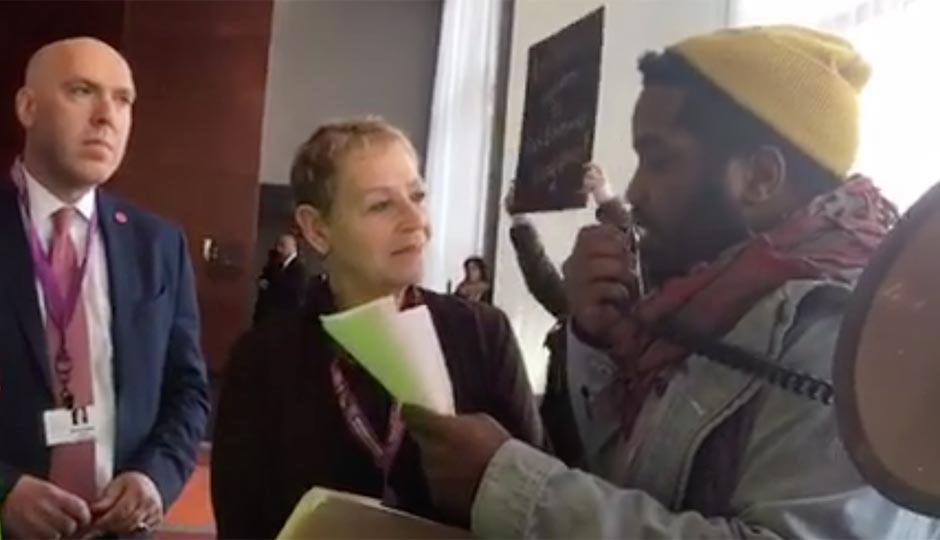 Screenshot of Abdul-Aliy Mohammad reading a list of demands to Nurit Shein and Michael Weiss.

“Nurit Shein, resign!” was the catchphrase a dozen members of the intersectional activist group Black & Brown Workers Collective (BBWC) chanted on Friday during the Mazzoni Center’s eighth-annual “Justice in Action” event at the Loews hotel in Center City.

After posting a Change.org petition calling for the Mazzoni CEO to resign amid controversy surrounding her remarks following the Philadelphia Commission on Human Relations Gayborhood racism report, Friday’s protest was an in-person confrontation in which the BBWC handed Mazzoni board members a list of their demands and spoke to Shein in person. The demands included Shein stepping down, Mazzoni medical director Dr. Robert Winn resigning, and Mazzoni allocating nonrestricted​ funds to “support therapy and other infrastructure to help former and current staff that have had an increase in need for therapeutic care due to workplace violence.”

One of the board members present during the direct action was Michael Weiss, who is also the owner of Woody’s and Voyeur nightclub. Weiss, the board secretary, motioned protesters to lower their volume as they spoke their demands through a bullhorn. Weiss remained silent for the remainder of the action as protesters demanded that they speak with Shein.

After the group spoke for a few minutes with other board members, including Dr. Jimmy J. Ruiz, Mazzoni’s board president, who reminded protesters that he was a Latinx gay man, Nurit finally entered the main lobby, where she was asked to resign. “No, I’m not resigning,” Shein told the protesters.

Once the BBWC began to read allegations of sexual misconduct from Dr. Robert Winn, Shein began to exit the demonstration. While leaving, she asked the protestors “Are you done?” The protesters continued to enter the luncheon with signs that crossed out “#ByeNellie” (an ode to speculation that LGBT Affairs liaison Nellie Fitzpatrick is stepping down) and replaced it with “#ByeNurit.” Police eventually escorted them out of the hotel. No arrests were made.

You can watch the entire protest on Facebook Live: