What If Friends Happened in Philadelphia?

On the 10th anniversary of its finale, 10 iconic scenes reset in Philly. This week marks the tenth anniversary of the Friends finale, which I remember watching on the night I moved back on with my parents after a failed attempt at dormitory living. Surrounded by a mini-fridge, garbage bags full of West Chester University gear and a crate of Early Childhood Education textbooks that I would later sell on eBay, I bid adieu to Ross, Monica, Rachel, Joey, Chandler and Phoebe.

I wept when Chandler and Monica had their twins. I wept when Ross and Rachel reunited (SPOILER ALERT: She got off the plane), and I wept when Joey and Phoebe bought a chick and a duck for Monica and Chandler. It sounds silly but I was so sad to be losing these characters who I’d come to think of as, well, friends.

Throughout my life — and thanks to the glorious world of syndicated television — these six characters had been constants through high school break-ups, fights with my best girl friends and the beginning of college. They gave me glimpse at what adulthood had to offer — and made me excited about my future (which I presumed would include enormous apartments, endless coffee shop hangs and a lot of baby Ts). I grew up watching them grow up and Friends remains one of the most comforting shows to me. (Thank goodness for the seemingly endless loop of reruns playing on TBS every day.)

The older I get, the more relatable I find Friends. Unlike other zeitgeisty shows like Sex and the City and Dawson’s Creek, which feel dated and immature, Friends is a show that only becomes more relevant to me as I grow older and find myself in situations similar to the characters. Of course, the only problem is that the gang is in New York while I squander my days away in Philadelphia.

What would my beloved friends do in Philadelphia? I have a few thoughts … 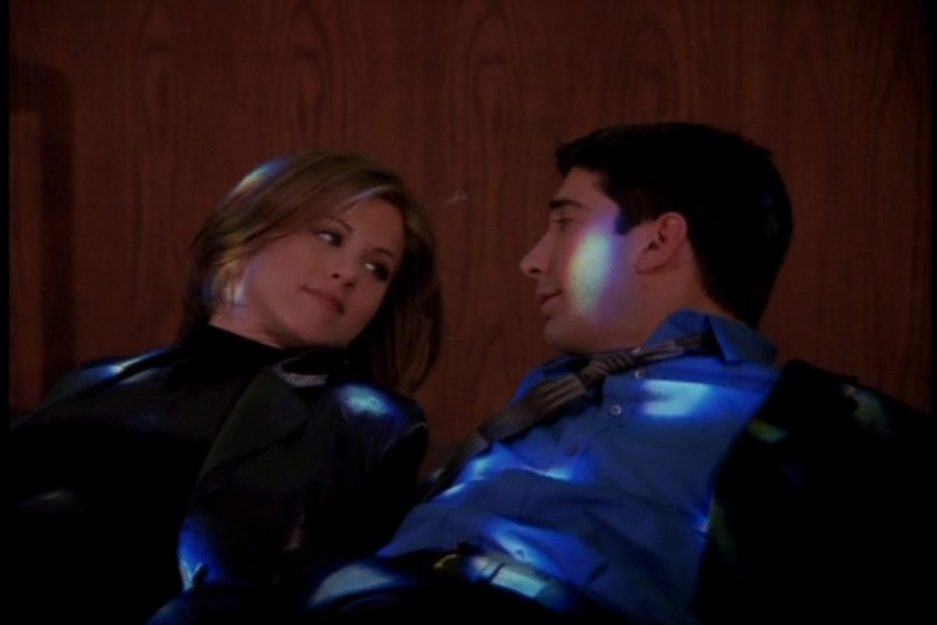 The One Where Ross and Rachel Do It

In a memorable scene from season two, Ross and Rachel consummate their love affair on the floor of the planetarium where Ross works. The obvious Philadelphia correlation would be to have to the pair, um, pair off at the Fels Planetarium at Franklin Institute. But more than likely, paleontologist Ross would have a full-time gig at the Academy of Natural Sciences, where they’d do it (incredibly awkwardly) in the Butterfly Room. 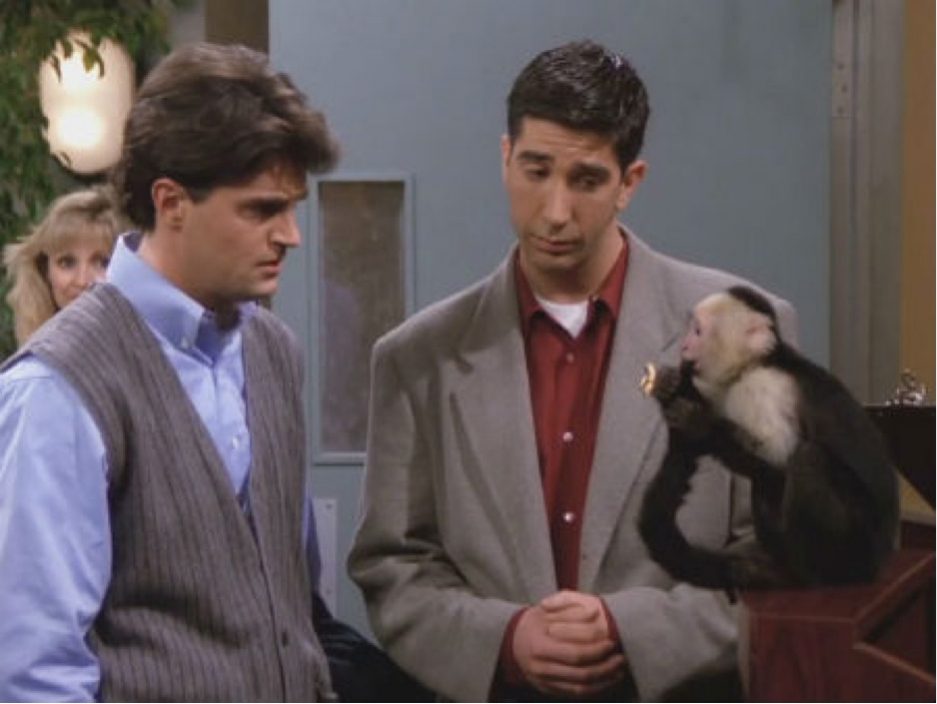 The Ones With the Monkey

In season one, Ross deals with his divorce from Carol by purchasing a pet monkey named Marcel. Later, Marcel is given away to a zoo. If Friends was in Philly, Marcel could live at the Philadelphia Zoo, where Monkey Junction is a highlight. 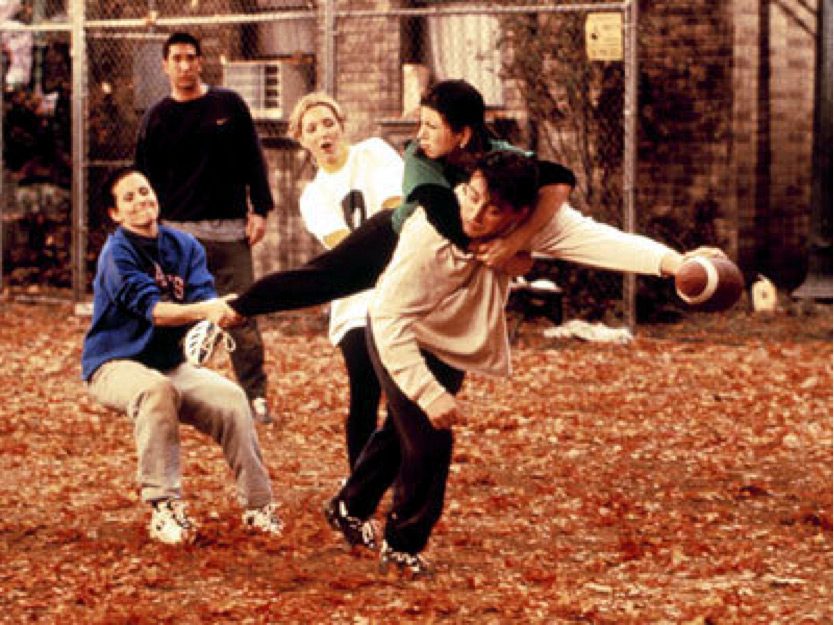 The One With the Football Game

When the gang plays the Thanksgiving touch football game at the park, they have to fight for space at Franklin Field where the Garces-Vetri game goes down every year. 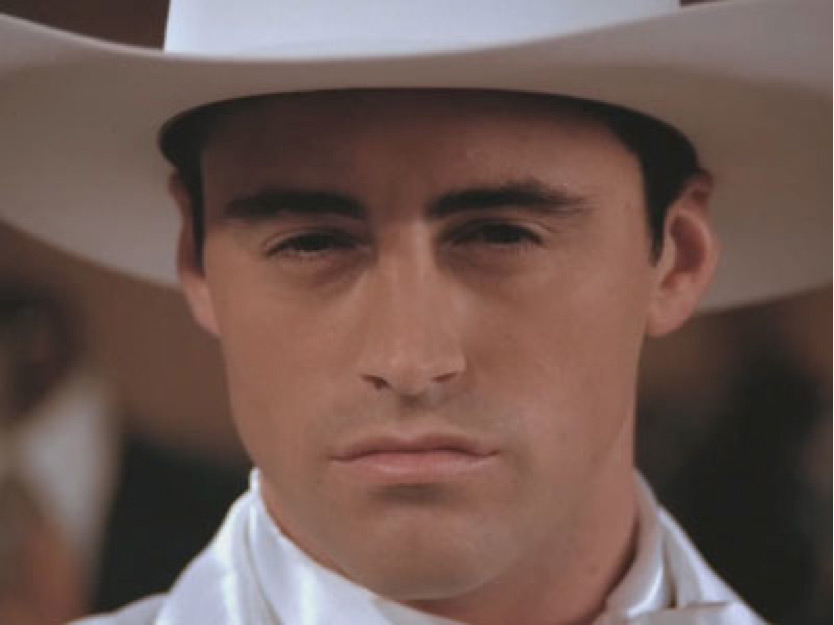 The One With the Hombre Guy

Struggling actor Joey takes a job in the cosmetics department where he offers shoppers a test spray of cologne. In the Philadelphia version, he’d have no choice but to do this at Macy’s, our only reasonable department store. Eventually, he is cast in an M. Night Shyamalan flick. 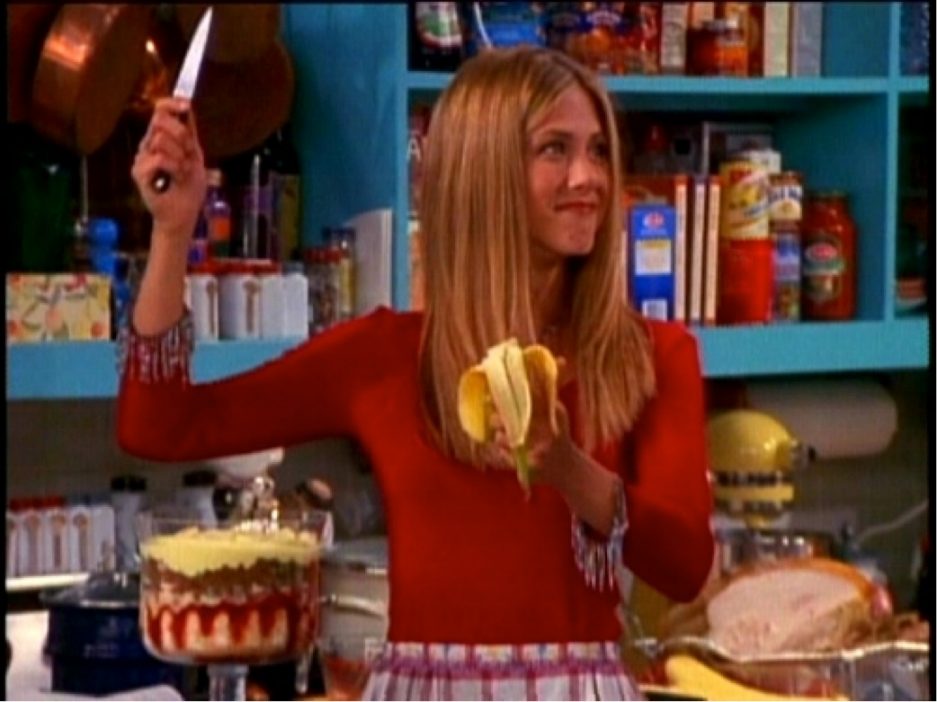 The Ones Where Joey Loves Food

Outside of work, the sandwich enthusiast is obsessed with Wawa and whenever he needs the Joey Special — “TWO pizzas!” — he calls up Lorenzo’s. And when he enjoys Rachel’s mistakenly meaty trifle, he loves the Scrapple in it. 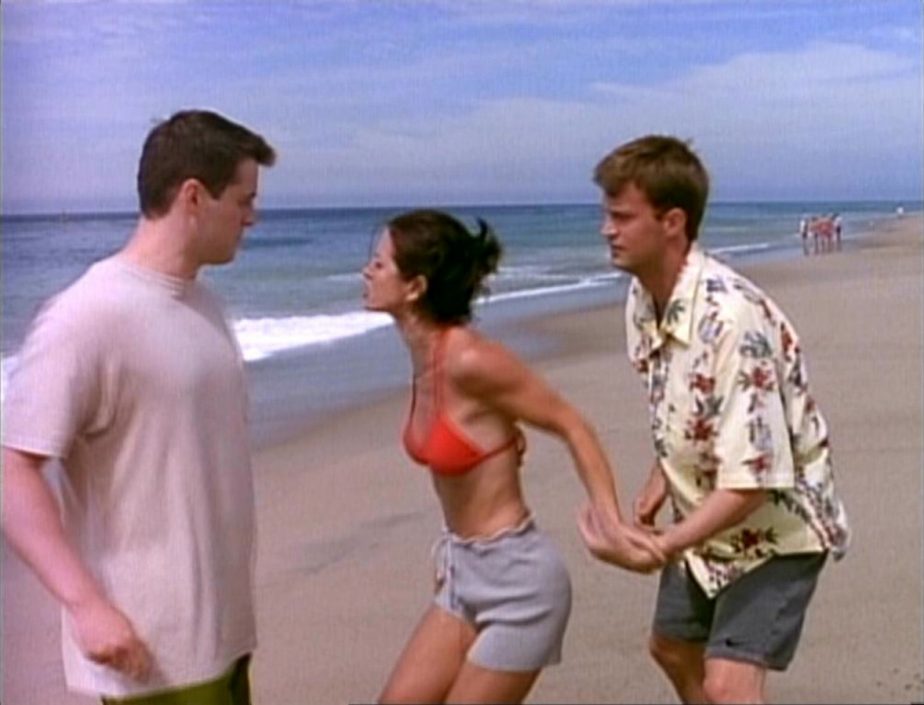 The One Where Chandler Pees on Monica

To open season four, the gang heads to the beach for a vacation weekend. Monica gets strung by a jellyfish and Chandler pees on her leg to remove the toxins. Sounds like a normal weekend trip to Atlantic City, right? 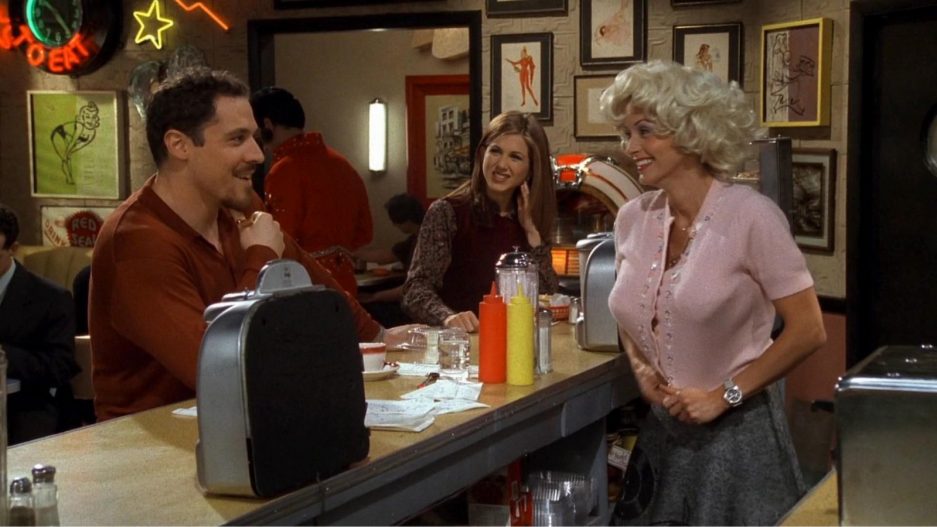 The Ones When Monica Wears Fake Boobs

Throughout the series, Monica is a chef, including a stint at a classy joint and a short-term gig as a costumed diner waitress. The Philly version: Going from being the chef de cuisine for Marc Vetri and then having to work at City Tavern. 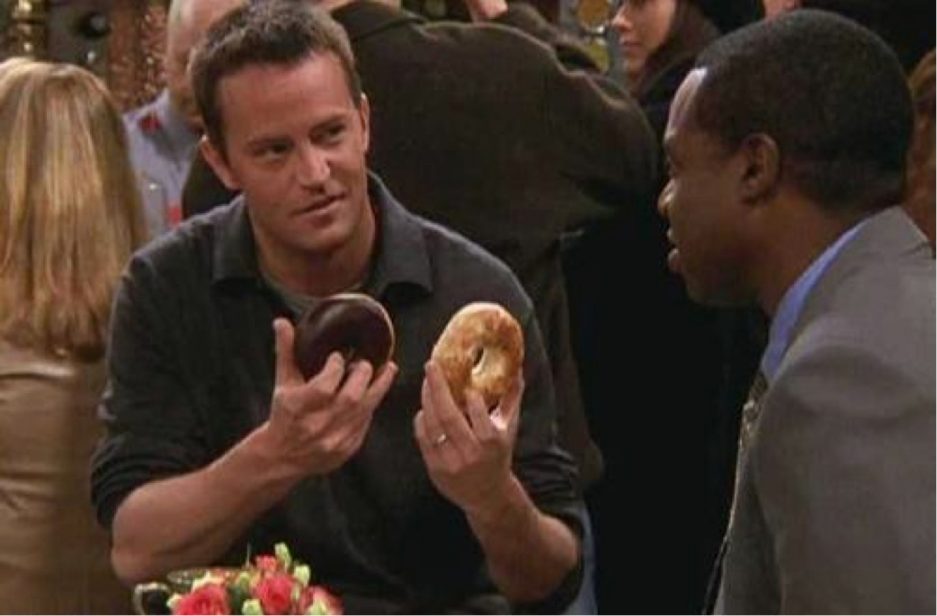 The One Where Chandler’s Into Marketing

After years of working a boring data job, Chandler eventually reinvents himself as a marketing guy where he comes up with things like, “Bagels and donuts: Round food for every mood.” We envision him working at Red Tettemer. 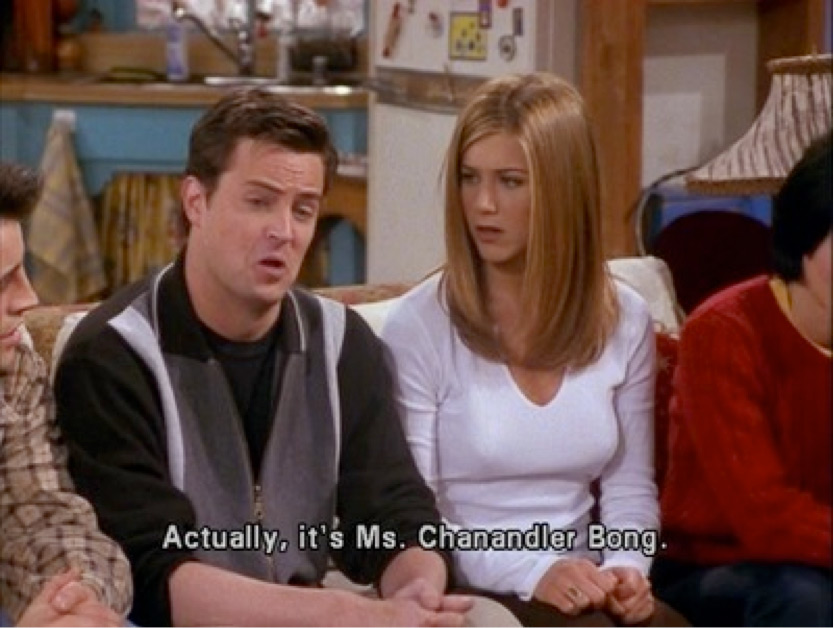 The One With Miss Chanandler Bong

And though in New York, his TV Guide was addressed to Ms. Chanandler Bong, we know that Chandler’s monthly issue of Philadelphia magazine hits the mailbox with that name. 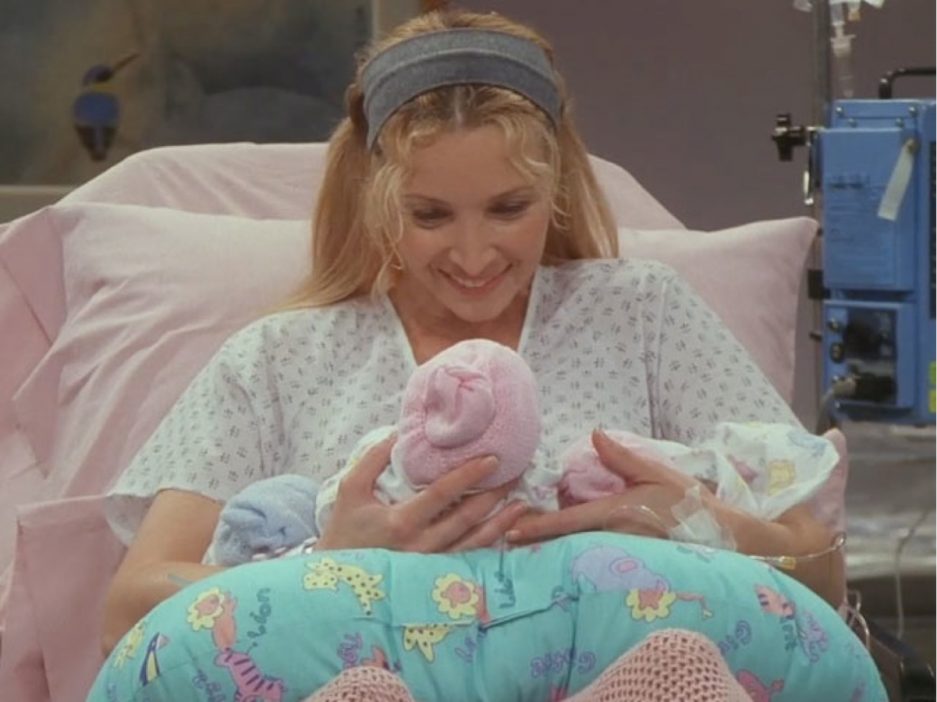 The One Where Phoebe Has Triplets

In season four, Phoebe gives birth to triplets, which she carried as a surrogate for her brother, Frank. Understandably freaked at having three babies at once, Philly Phoebe would seek advice from Kate Gosselin, who is no stranger to having more than one baby at a time.