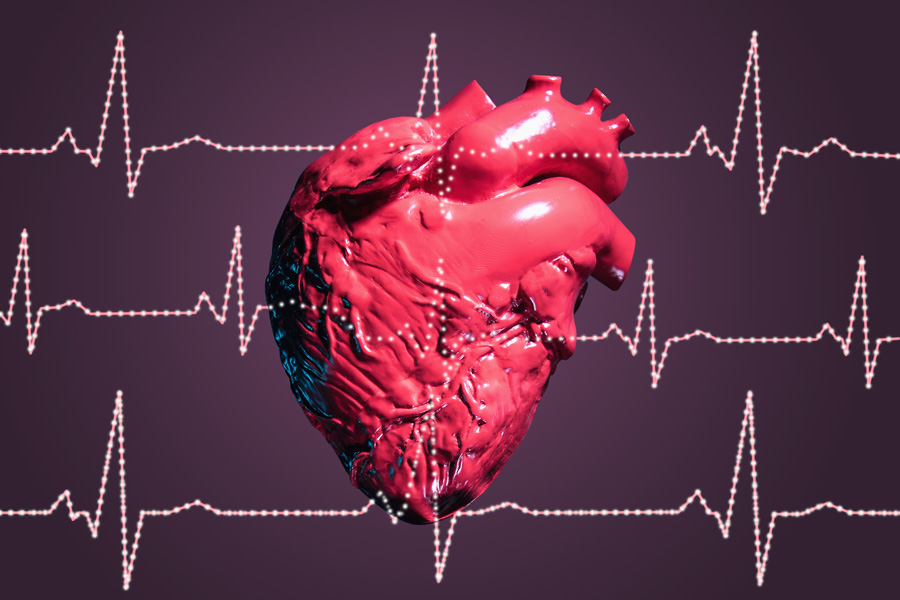 When it comes to overall health and wellness, taking care of one’s heart is critical, as heart disease remains the leading cause of death in the United States. Approximately 2.7 million Americans suffer from atrial fibrillation (AFib), a quivering or irregular beat that prevents blood from flowing as well as it should through the heart, which risks blood pooling and clots forming. This can lead to other medical problems including stroke and heart failure if left untreated or not treated early.

But when it comes to early-intervention strategies for AFib — such as antiarrhythmic drugs or catheter ablation (during which a tube is threaded into the heart and used to create scars on the heart to interrupt the irregular signals) — Penn researchers have recently found racial/ethnic and socioeconomic disparities in not only managing the condition, but in long-term cardiovascular outcomes. Below, Lauren Eberly, lead author of the study and cardiovascular fellow at the University of Pennsylvania, discusses the study’s findings and the larger implications they have on dismantling the U.S. healthcare system’s systemic racism and discrimination.

NextHealth: What catalyzed you and your team to begin this study?
Eberly: We wanted to initiate this study for two intersecting reasons. One, atrial fibrillation (AFib) is the most common cardiac arrhythmia, which can lead to heart failure and stroke if left untreated. Studies have shown that patient outcomes are improved if rhythm-control strategies like antiarrhythmic drugs and catheter ablation are pursued early. Two, the healthcare system is fraught with inequities, specifically regarding care delivery and decreased access to therapies for patients of color and of lower socioeconomic statuses. We wanted to see who is and is not getting these early interventions in order to uncover what disparities might exist within our field specifically.

What key findings did you and your team discover?
We examined inpatient, outpatient, and pharmacy claims data from October 1, 2015 to June 30, 2019, identifying nearly 110,000 adult patients (at least 18 years old) with a diagnosis of incident paroxysmal AFib — meaning their diagnosis was new and their AFib intermittent — and who were commercially insured for at least one year before and six months after study entry. These patients would show strong indication that they’d need to be put in a better rhythm using early intervention therapies.

The data shows that the cumulative percentage of patients treated with antiarrhythmic drugs and catheter ablation increased from 1.6 percent to 3.8 percent from 2016 to 2019. Despite that increase, we found significant racial, ethnic, socioeconomic disparities surrounding early rhythm-control strategies. We discovered that Black patients were independently associated with lower receipt of rhythm control, specifically antiarrhythmic drugs. (Among those in whom a rhythm-control strategy was pursued, Black patients were not associated with lower rates of catheter ablation.) Latinx patients were less likely to receive catheter ablation treatment, and patients living in areas with median household incomes of less than $50,000 were 17 percent less likely to receive a rhythm control strategy of any kind, and 39 percent less likely to receive catheter ablation compared with those with a median household income of $100,000 or more.

How might the study’s findings reflect the structural racism and discrimination in healthcare?
Though the database’s language does not account for whether or not specialized procedures and care were offered or received, we believe our findings signal that there are biases in the healthcare industry regarding rhythm-control strategies. Based on prior research, reduced access to specialty cardiovascular care and lower rates of referrals to subspecialists — like a cardiac electrophysiologist who would perform the ablation and prescribe antiarrhythmic drugs — disproportionately impact delivery of care and quality of life for Black patients. When it comes to socioeconomics, new therapies are often less likely used among patients with lower income, suggesting that clinicians might preferentially offer rhythm-control strategies to patients with higher incomes due to biases surrounding affordability and financial ability.

Patient advocacy may also be a factor in treatment decisions. It has been documented that patients from marginalized communities experience reduced levels of confidence and input regarding their opportunity to receive curative procedures or therapies due to the long history of discrimination these patients face in the U.S. healthcare system.

“Medical professionals and leaders should be investigating the ways in which their therapies or approaches are only servicing certain groups of patients, and then working toward mitigating — and completely eliminating — any existing disparity.”

Should a study like this be done for every health intervention?
Yes, I believe so. While our study is specific to cardiology, it does not cover the entire cardiovascular field, nor healthcare as a whole. Our [country’s] healthcare system has long perpetuated deep structural inequities, and now our study confirms those in receipt of cardiovascular therapy. Across the board, medical professionals and leaders should be investigating the ways in which their therapies or approaches are only servicing certain groups of patients, and then working toward mitigating — and completely eliminating — any existing disparity. Further studies similar to the one we conducted are paramount if there is going to be any change.

How might these findings inform a solution to these disparities?
Overall, we [healthcare professionals] need to redesign our system so that it prioritizes those who have been historically marginalized. If we don’t, these disparities will compound and continue to be perpetuated. On a micro level, we hope this encourages primary care providers and non-cardiac providers to more readily consider rhythm-control strategies and specialist referrals for marginalized groups. Here at Penn, we’re going to look at patient charts and our own database in order to answer questions like “Are patients referred to cardiology only?” “Do they have referrals to electrophysiology?” “Was an early rhythm-control strategy ever offered by the doctor?” and “If the strategy was offered, was it denied by the patient?” That way, we can better determine where and why barriers exist in order to reduce and hopefully eliminate them.

More broadly, institutions need to look within their own walls to see how they are propagating disparity, and then take active steps toward fixing it. A way to do this is to actually allocate funding toward equity enhancement, just as it is for quality and safety measures. We have to actually show we prioritize equity, and not simply say we do.