Researchers at MossRehab are studying whether the technology can help rewire patients’ brains to alleviate unexplained limb pain in amputees. 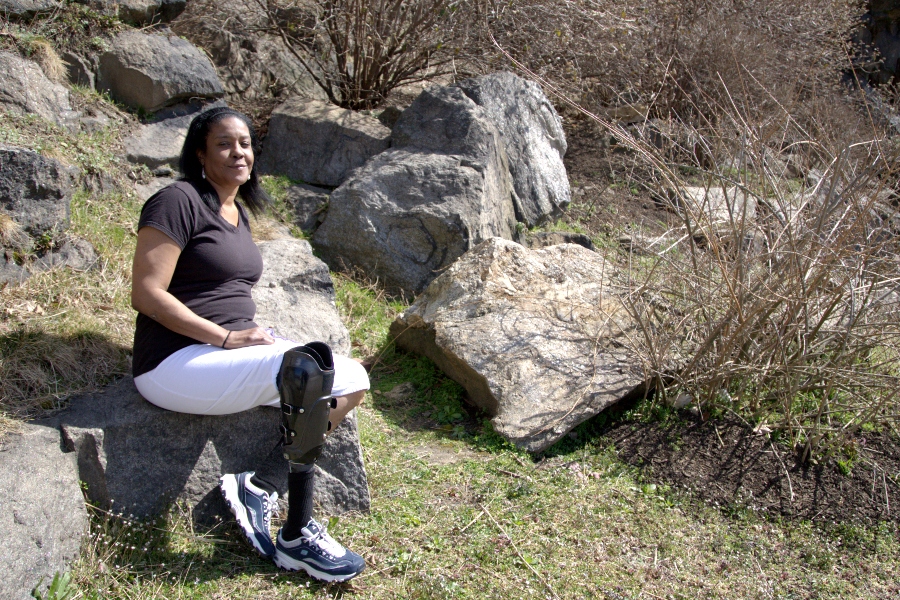 Joyce Johnson is one of 14 patients who participated in MossRehab’s pilot study that investigates the efficacy of a virtual reality treatment for phantom limb pain. / Courtesy

Joyce Johnson was 44 years old when she learned she’d have to undergo a below-knee amputation on her right leg due to a severe blood clot. For a time, she thought losing a limb and adjusting to using a prosthetic leg would be the most difficult part of her health journey. But it’s what came after the surgery that, in some ways, has given Johnson the most grief. About six months after the amputation, Johnson began feeling a sharp pain in the part of her leg that was no longer there.

“It was weird,” Johnson recalled. “Sometimes I would feel an itch or a shooting pain, and I would feel it with and without my prosthetic. Sometimes it would feel like my foot was itching, but I didn’t have a foot there. I didn’t know what to do to ease it. I would try to squeeze and press the bottom of the stump to see if it would stop but nothing really helped.”

What Johnson was experiencing is called phantom limb pain (PLP), a debilitating condition that causes painful sensations in the area of an amputated limb. Approximately 90 percent of patients with limb amputations experience the persistent sensation of the missing extremity, according to Dr. Laurel Buxbaum, the associate director of Moss Rehabilitation Research Institute and director of the Cognition and Action Lab at MossRehab who has been studying cognitive processes related to the PLP phenomenon for roughly three decades.

Now, Buxbaum and a team of researchers from the Moss Rehabilitation Research Institute and the University of Pennsylvania are conducting new studies to determine whether a virtual reality treatment could help rewire patients’ brains to alleviate phantom limb pain. It’s one of only three clinical trials in the state that are currently exploring treatments for PLP and one of less than five studies in the country that are investigating virtual reality as a potential cure for the condition.

PLP is the result of changes in the peripheral and central nervous system after amputation that cause mismatched signals between the brain and the missing limb. It affects the quality of life for patients like Johnson who have few options beyond taking strong pharmaceutical drugs to temporarily relieve pain.

“It’s a very frustrating and difficult thing to have to live with,” Buxbaum said. “For some patients who have severe or constant pain, their quality of life is really influenced. Some patients are afraid to venture out into the world because they fear to have an attack of pain while they’re out and about.”

Several clinical trials have been conducted, usually in small cohorts, to explore potential treatments for PLP but the efficacy of existing treatments and the underlying causes of the condition itself are still poorly understood.

So far, one of the most effective treatments for PLP has been mirror therapy. The treatment requires patients to practice movements using a mirror to create a reflective illusion of an affected limb. The action tricks the brain into thinking movement has occurred without pain. While effective, Buxbaum says patients tend to grow bored with repeating the same actions in the mirror repeatedly.

In the Moss study, individuals with lower-limb amputations wear a head-mounted display that provides a three-dimensional view of a virtual environment. Patients engage in several game-like tasks that require movement of both legs, such as “scooting” around a maze on a virtual chair or rappelling up a cliff by holding a virtual rope and pushing off with the legs. Custom software and a motion tracking system generate an image of a moving figure with two complete legs. The visualization, Buxbaum says, is more engaging and, according to early results, may eliminate pain for longer periods of time than other therapies. 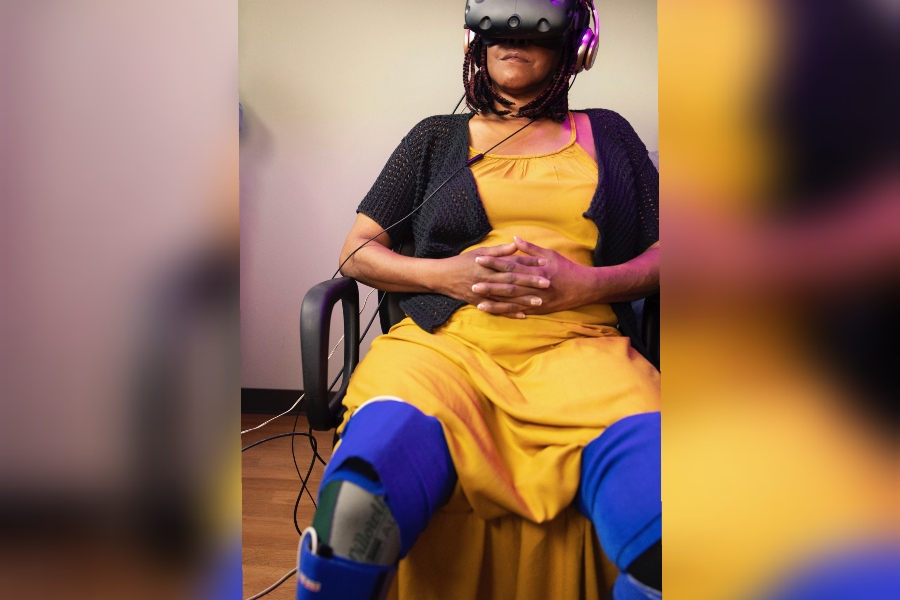 Johnson was one of 14 patients who participated in the first round of the Moss study. Within a month of receiving her first VR treatment, Johnson says her pain was gone. Within three months, she’d stopped taking her prescribed pain medications and remained pain-free.

“It was fun, going to the sessions,” Johnson said. “After a while, I didn’t feel any pain.”

Now, six months since her last treatment as part of the study, Johnson said she’s just beginning to feel some slight pain again.

Buxbaum said her team is in the process of securing funding to launch a second phase of the study that will test the method in a larger group of amputees for a longer period to hopefully determine the long-term effects of the treatment. The team also plans to explore whether the VR treatment will work for above-the-knee amputees and if it can be administered in people’s homes instead of having patients come to treatment centers.

“One of the interesting questions we want to explore, that we don’t know now, is whether after you’ve had a course of six or seven weeks of treatment, and you’re starting to experience a little bit of pain again, whether you could come back in and just have a booster session to address the pain,” she said.

“Eventually, we hope we’ll be able to have the treatment delivered in peoples’ homes so they can have a better quality of life.”