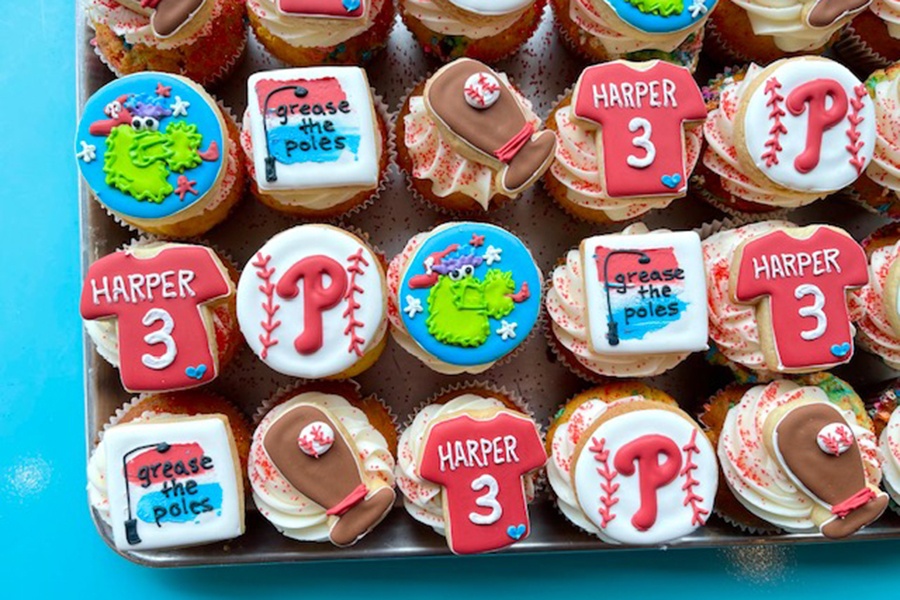 What a time to be alive, Philly. I can barely focus, and it’s literally my job this week to think and write about the Phillies, so my deepest sympathies to the rest of you. Perhaps a cupcake would make it better? What if it’s a Phillie Phanatic cupcake? Thought so.

Just like the rest of us, Philly restaurants are all in on the Phillies’ World Series run. So if you’re looking for a way to cater your watch party or just celebrate with a good cupcake, here’s where to look. 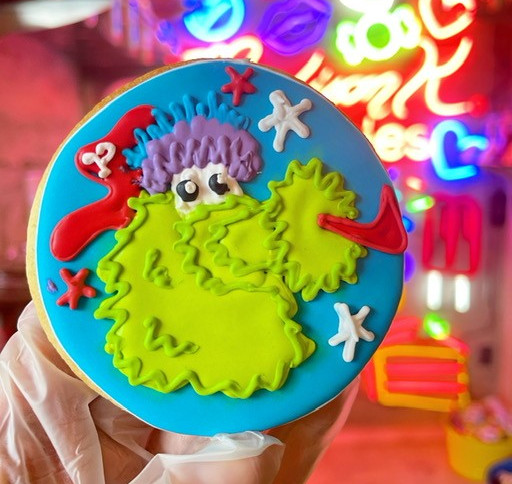 Of course this Best of Philly-winning cookie artist is going to have Phillies creations. Harper jersey-topped cupcakes? Sure! Phanatic-iced cookies? Obviously. Cookies that encourage a little bit of lawlessness? Why not? They’ll have a bunch of different Phillies cookie and cupcake designs available in-store for all your World Series sugar needs.
800 North 2nd Street, Northern Liberties.

It’s a tale that will live forever in Philly mythology: The Phillies began their summer breakout just when Wawa began their annual Hoagiefest promotion. Discount hoagies sprinkled that magical pixie dust to push the Phillies over the edge to grab a Wild Card spot. But Kyle Schwarber was slipping in the postseason, going 1-for-20 with no home runs. For a man known for hitting Schwarbombs, this would not do. Enter Wawa, who reinstated their hoagie deals — this time with the name Schwarberfest — on October 18th. The rest is history. We busted into the World Series, and Wawa isn’t taking any chances. Schwarberfest continues through the series with $5 Shortis and $6 Classics when you order and pay in the app.

An in-person special to be aware of: Starting today and through the World Series, McGillin’s will be serving up red beer — making it an even better place to watch the Phillies. In addition to the crimson-colored drink, there are also lots of Phillies food and drink specials including a “Ring the Bell” cheesesteak, the “MVP” (that’s meatloaf, Vidalia onion rings and provolone), and a Phillie-tini.
1310 Drury Street, Midtown Village. 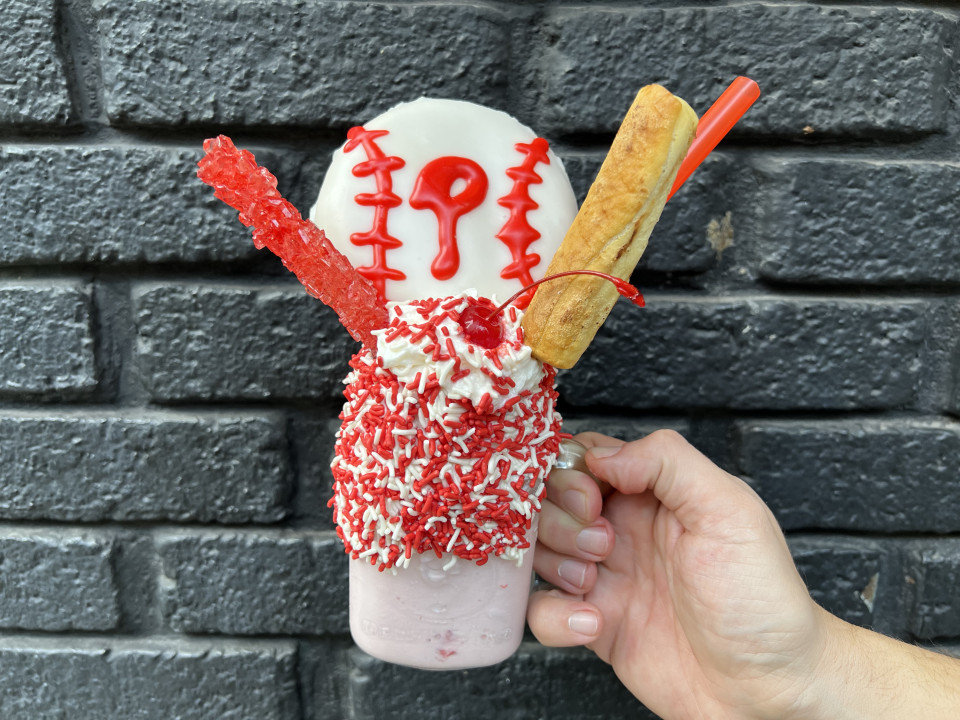 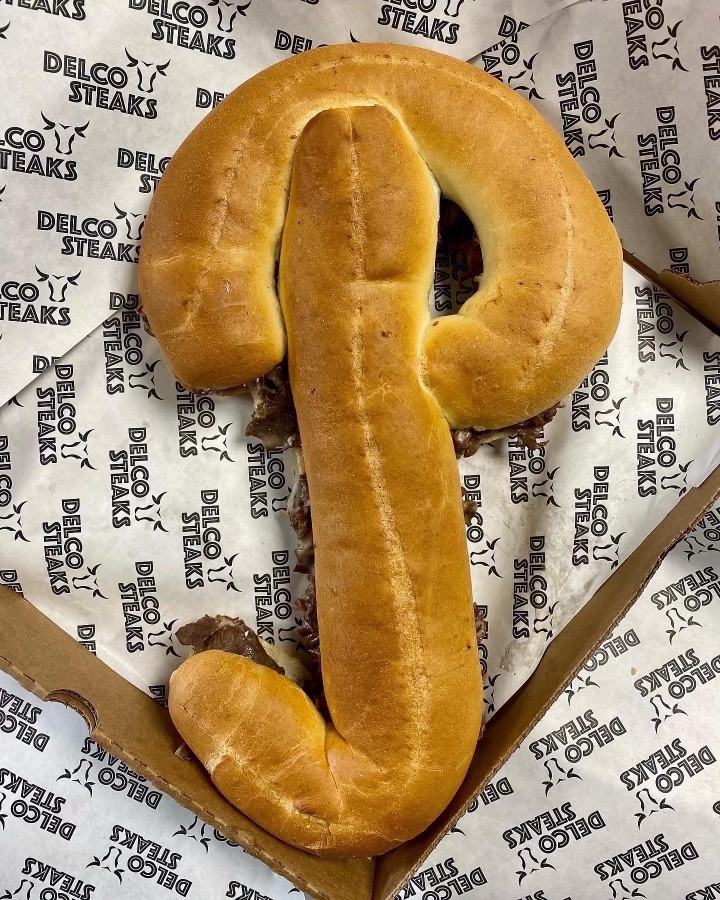 Delco Steaks is offering the “Delcodelphia,” a 20-ounce black Angus ribeye cheesesteak with Cooper sharp cheese on a Carangi Baking Company Phillies-P-shaped seedless Italian roll now through the end of the World Series while supplies last. It’ll run you $25, and they also have a vegetarian version made with portobello mushroom.
2567 West Chester Pike, Broomall; 336 Kedron Avenue, Folsom.

Buttercream-filled cupcakes topped with red and white sprinkles and a Phillies “P.” Delightful. You can grab a cupcake or a whole red-velvet Phillies cake at all Termini’s locations. Even better, they also have a Phillies cupcake kit you can send an out-of-town fan so they can have a taste of home (and a fun activity) while they watch the World Series. (Tip: Use code PHILLIES for free shipping.)
Various locations and online. 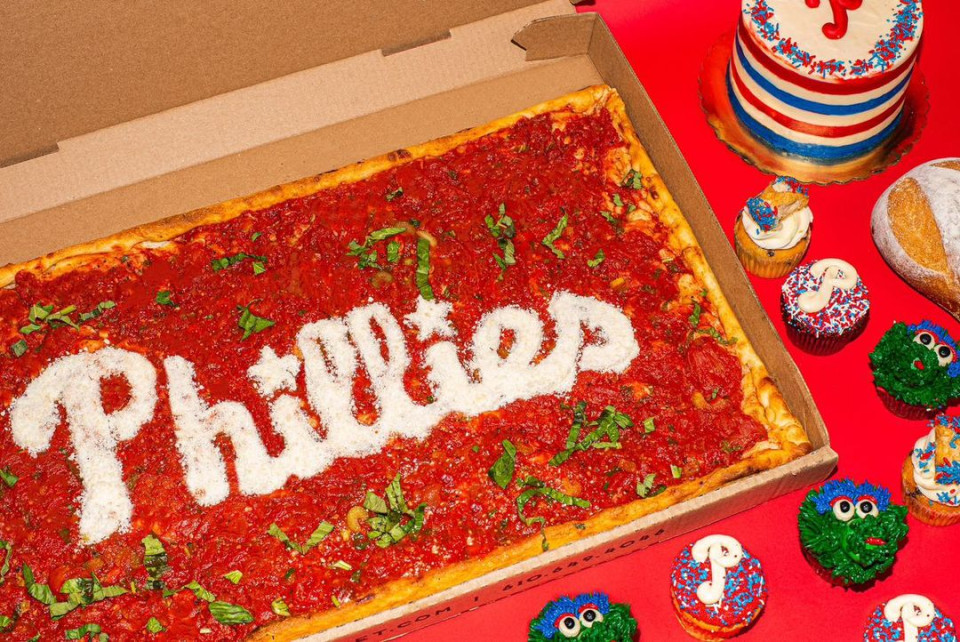 The Main Line favorite Italian market is stepping it up with Phillies-inspired tomato pies, cupcakes and cakes. They’re all available for grab-and-go at their Ardmore and West Chester locations, and you can also order all your game-day essentials online.
2616 East County Line Road, Ardmore; 128 West Market Street, West Chester.

You just know the brewery that makes all kinds of pop-culture-referencing beer wasn’t going to miss an opportunity to get in on the World Series action. Their new beer, MV3, is named in honor of Bryce Harper. The peach pale ale is brewed with mosaic hops and oats, and is available only in their Fishtown taproom on draft and by the crowler.
1727 Front Street, Fishtown.

“Turn your single into a double!” For the duration of the World Series, if you wear Phillies gear to their Old City ice cream parlor, Franklin Fountain will give you a free scoop with the purchase of ice cream.
116 Market Street, Old City. 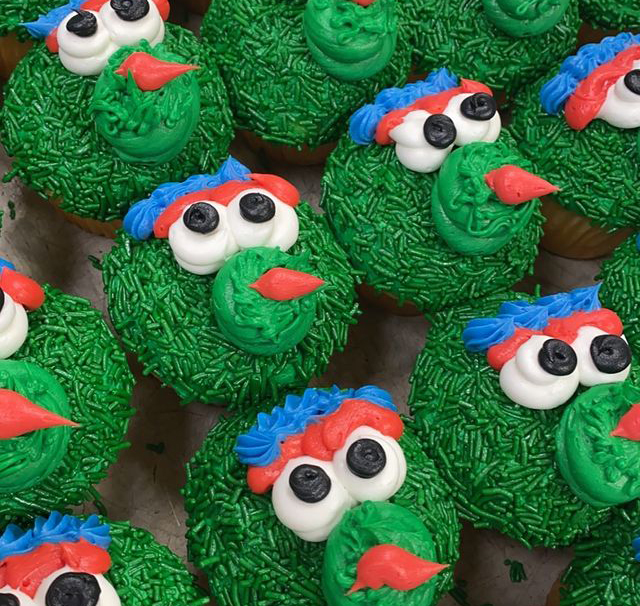 Just the cutest Phanatic sprinkle cupcakes you ever did see, plus various cookies, cakes and treats to round out your dessert platter. Note: All orders must be placed over the phone at 610-353-2550.
2076 Sproul Road, Broomall. 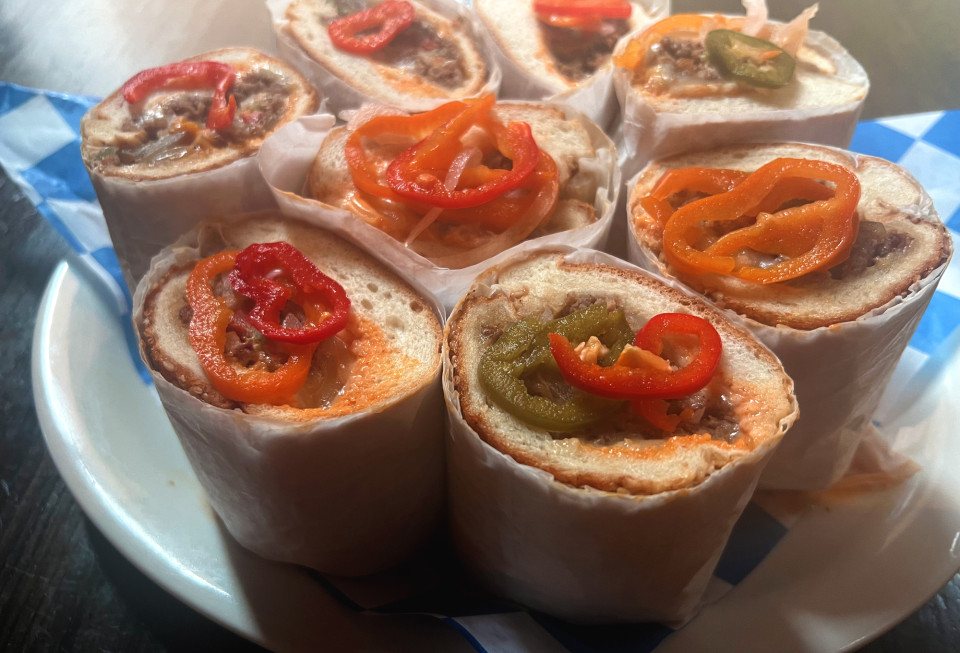 Available only during each World Series game, the 24-inch-long Red October Cheesesteak is topped with red-chili mayo, provolone and pickled jalapeños. It’s served in eight pieces to make sharing easier — whether or not you decide to share it is up to you.
1100 Chestnut Street, Center City; 401 South Street, Queen Village.